The structure of the human eye is so complex that it’s hard to believe that it’s not the product of intelligent design. But by looking at the eyes of other animals, scientists have shown that it evolved very gradually from a simple light-dark sensor over the course of around 100 million years.

It functions in a very similar way to a camera, with an opening through which the light enters, a lens for focusing and a light-sensitive membrane at the back.

The amount of light that enters the eye is controlled by the circular and radial muscles in the iris, which contract and relax to alter the size of the pupil. The light first passes through a tough protective sheet called the cornea, and then moves into the lens. This adjustable structure bends the light, focusing it down to a point on the retina, at the back of the eye.

The retina is covered in millions of light-sensitive receptors known as rods and cones. Each receptor contains pigment molecules, which change shape when they are hit by light, triggering an electrical message that travels to the brain via the optic nerve. 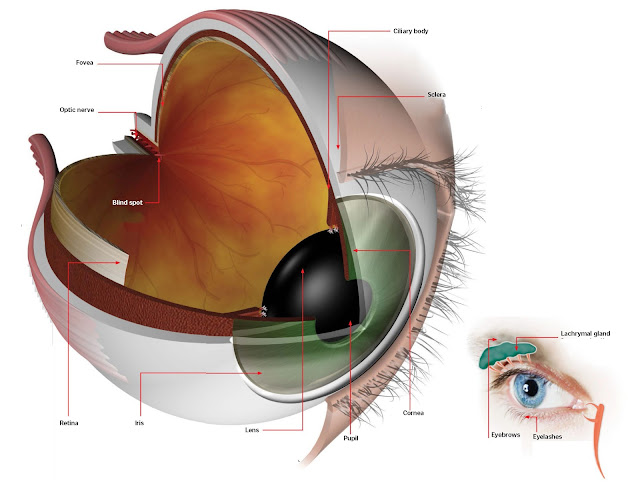 Fovea : This pit at the centre of the back of the eye is rich in light receptors and is responsible for sharp central vision.

Optic nerve : Signals from the retina travel to the brain via the optic nerve, a bundle of fibres that exits through the back of the eye.

Blind spot : At the position where the optic nerve leaves the eye, there is no space for light receptors, leaving a natural blind spot in our vision.

Retina : The retina is covered in receptors that detect light. It is highly pigmented, preventing the light from scattering and ensuring a crisp image.

Iris : This circular muscle controls the size of the pupil, allowing it to be closed down in bright light, or opened wide in the dark.

Lens : The lens is responsible for focusing the light, and can change shape to accommodate objects near and far from the eye.

Pupil : The pupil is a hole that allows light to reach the back of the eye.

Cornea : The pupil and iris are covered in a tough, transparent membrane, which provides protection and contributes to focusing the light.

Sclera : A tough white membrane known as the sclera helps to maintain the eye’s spherical shape.

Ciliary body : This tissue surrounds the lens and contains the muscles responsible for changing its shape. 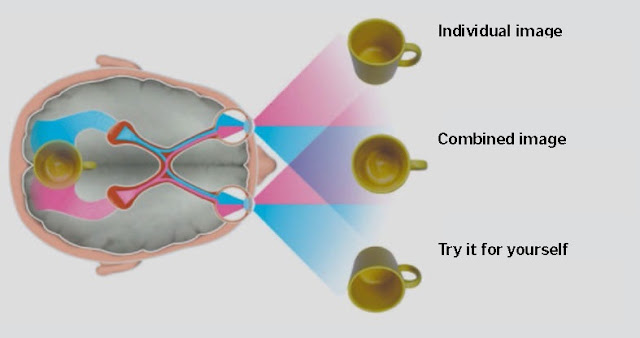 Each eye sees a slightly different image, allowing the brain to perceive depth.  Our eyes are only able to produce two-dimensional images, but with some clever processing, the brain is able to build these flat pictures into a three-dimensional view. Our eyes are positioned about five centimetres (two inches) apart, so each sees the world from a slightly different angle. The brain compares the two pictures, using the differences to create the illusion of depth.

Due to the positioning of our eyes, when objects are closer than about 5.5m (18ft) away, each eye sees a slightly different angle.

The incoming signals from both eyes are compared in the brain, and the subtle differences are used to create a three-dimensional image.

Try it for yourself

By holding your hand in front of your face and closing one eye at a time, it is easy to see the different 2D views perceived by each eye.

The eyes are shielded by several layers of protection. They are almost completely encased in bone at the back and insulated from shock by layers of muscle and connective tissue. The front is kept moist with tears and are constantly wiped by the blinking of the eyelids, while the hairs of the eyebrows and eyelashes catch any debris that might fall in.

Tears are produced here and wash across to the inner corner of the eye, helping to clean and nourish the surface.

Eyelashes not only catch dust before it enters the eye, they are also sensitive, like whiskers, and the slightest unexpected touch triggers a protective blink.

The arch of the eyebrows helps to keep sweat and rain away from the eyes, channelling it down the sides of the face. 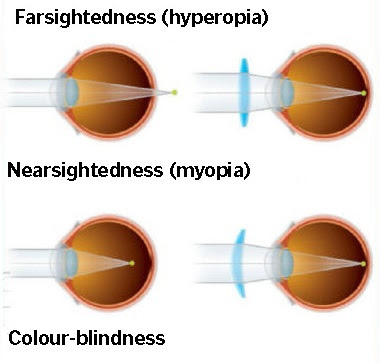 The most common problems with our eyesight

If the eye is too short, the cornea is too flat, or if the lens sits too far back, incoming light is focused behind the retina, making nearby objects appear blurry, particularly in the dark.

If the eye is too long, or the cornea and lens are too curved, the light is focused before it hits the back of the eye, and then starts to defocus again as it reaches the retina, making distant objects difficult to see.

This rare condition is often linked to a gene on the X-chromosome and occurs more commonly in men than in women. A defect in the cone cells of the eye reduces the number of colours that can be detected.

Related Posts
Sensory
Home
Give us your opinion