Surrounded by cytoplasm, the nucleus contains a cell’s DNA and controls all of its functions and processes such as movement and reproduction. There are two main types of cell: eukaryotic and prokaryotic. Eukaryotic cells contain a nucleus while prokaryotic do not. Some eukaryotic cells have more than one nucleus – called multinucleate cells – occurring when fusion or division creates two or more nuclei.

At the heart of a nucleus you’ll find the nucleolus; this particular area is essential in the formation of ribosomes. Ribosomes are responsible for making proteins out of amino acids which take care of growth and repair.
Being so important, the nucleus is the most protected part of the cell. In animal cells it is always located near its centre and away from the membrane to ensure it has the maximum cushioning. As well as the jelly-like cytoplasm around it, the nucleus itself is filled with nucleoplasm, a viscous liquid which maintains its structural integrity.
Conversely, in plant cells, the nucleus is more sporadically placed. This is due to the larger vacuole in a plant cell and the added protection that is granted by a cell wall. 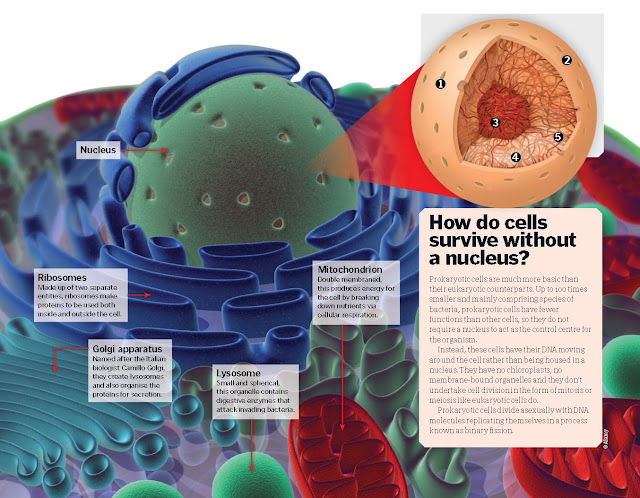 Take a peek at what’s happening inside the ‘brain’ of a eukaryotic cell
1 Nuclear pore
These channels control the movement of molecules between the nucleus and cytoplasm.
3 Nucleolus
Made up of protein and RNA, this is the heart of the nucleus which manufactures ribosomes.
2 Nuclear envelope
Acts as a wall to protect the DNA within the nucleus and regulates cytoplasm access.
4 Nucleoplasm
This semi-liquid, semi-jelly material surrounds the nucleolus and keeps the organelle’s structure.
5 Chromatin
Produces chromosomes and aids cell division by condensing DNA molecules.

How do cells survive without a nucleus?
Prokaryotic cells are much more basic than their eukaryotic counterparts. Up to 100 times smaller and mainly comprising species of bacteria, prokaryotic cells have fewer functions than other cells, so they do not require a nucleus to act as the control centre for the organism.
Instead, these cells have their DNA moving around the cell rather than being housed in a nucleus. They have no chloroplasts, no membrane-bound organelles and they don’t undertake cell division in the form of mitosis or meiosis like eukaryotic cells do.


Prokaryotic cells divide asexually with DNA molecules replicating themselves in a process known as binary fission.