What Are Stem Cells?


What Are Stem Cells?
Stem cells are incredibly special because they have the potential to become any kind of cell in the body, from red blood cells to brain cells. They are essential to life and growth, as they repair tissues and replace dead cells. Skin, for example, is constantly replenished by skin stem cells.


Stem cells begin their life cycle as generic, featureless cells that don’t contain tissue-specific structures, such as the ability to carry oxygen. Stem cells become specialised through a process called differentiation. This is triggered by signals inside and outside the cell. Internal signals come from strands of DNA that carry information for all cellular structures, while external signals include chemicals from nearby cells. Stem cells can replicate many times – known as proliferation – while others such as nerve cells don’t divide at all. There are two stem cell types, as Professor Paul Fairchild, co-director of the Oxford Stem Cell Institute at Oxford Martin School explains: “Adult stem cells are multipotent, which means they are able to produce numerous cells that are loosely related, such as stem cells in the bone marrow can generate cells that make up the blood,” he says. “In contrast, pluripotent stem cells, found within developing embryos, are able to make any one of the estimated 210 cell types that make up the human body.”
This fascinating ability to transform and divide has made stem cells a rich source for medical research. Once their true potential has been harnessed, they could be used to treat a huge range of diseases and disabilities. 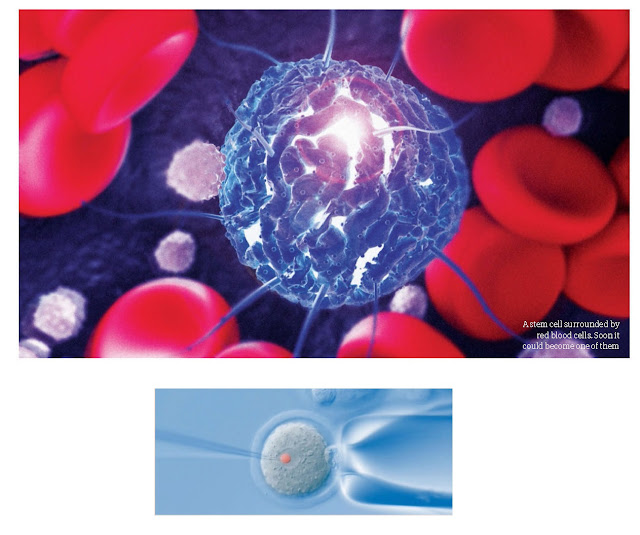 Cloning cells
Scientists can reprogram cells to forget their current role and become pluripotent cells indistinguishable from early embryonic stem cells. Induced pluripotent stem cells (IPSCs) can be used to take on the characteristics of nearby cells.
IPSCs are more reliable than stem cells grown from a donated embryo because the body is more likely to accept self-generated cells. IPSCs can treat degenerative conditions such as Parkinson’s disease and baldness, which are caused by cells dying without being replaced. The IPSCs fill those gaps in order to restore the body’s systems.
Professor Fairchild explains, “by deriving these cells from individuals with rare conditions, we are able to model the condition in the laboratory and investigate the effects of new drugs on that disease.“