Your brain Anatomy
It’s a computer, a thinking machine, a pink organ, and a vast collection of neurons – but how does it work? The human brain is amazingly complex – in fact, more complex than anything in the known universe. The brain effortlessly consumes power, stores memories, processes thoughts, and reacts to danger.


In some ways, the human brain is like a car engine. The fuel – which could be the sandwich you had for lunch or a sugar doughnut for breakfast – causes neurons to fire in a logical sequence and to bond with other neurons. This combination of neurons occurs incredibly fast, but the chain reaction might help you compose a symphony or recall entire passages of a book, help you pedal a bike or write an email to a friend.
Scientists are just beginning to understand how these brain neurons work – they have not figured out how they trigger a reaction when you touch a hot stove, for example, or why you can re-generate brain cells when you work out at the gym.
The connections inside a brain are very similar to the internet – the connections are constantly exchanging information. Yet, even the internet is rather simplistic when compared to neurons. There are ten to 100 neurons, and each one makes thousands of connections. This is how the brain processes information, or determines how to move an arm and grip a surface. These calculations, perceptions, memories, and reactions occur almost instantaneously, and not just a few times per minute, but millions. According to Jim Olds, research director with George Mason University, if the internet were as complex as our solar system, then the brain would be as complex as our galaxy. In other words, we have a lot to learn. Science has not given up trying, and has made recent discoveries about how we adapt, learn new information, and can actually increase brain capability.
In the most basic sense, our brain is the centre of all input and outputs in the human body. Dr Paula Tallal, a co-director of neuroscience at Rutgers University, says the brain is constantly processing sensory information – even from infancy. “It’s easiest to think of the brain in terms of inputs and outputs,” says Tallal. “Inputs are sensory information, outputs are how our brain organises that information and controls our motor systems.”
Tallal says one of the primary functions of the brain is in learning to predict what comes next. In her research for Scientific Learning, she has found that young children enjoy having the same book read to them again and again because that is how the brain registers acoustic cues that form into phonemes (sounds) to become spoken words.
“We learn to put things together so that they become smooth sequences,” she says. These smooth sequences are observable in the brain, interpreting. 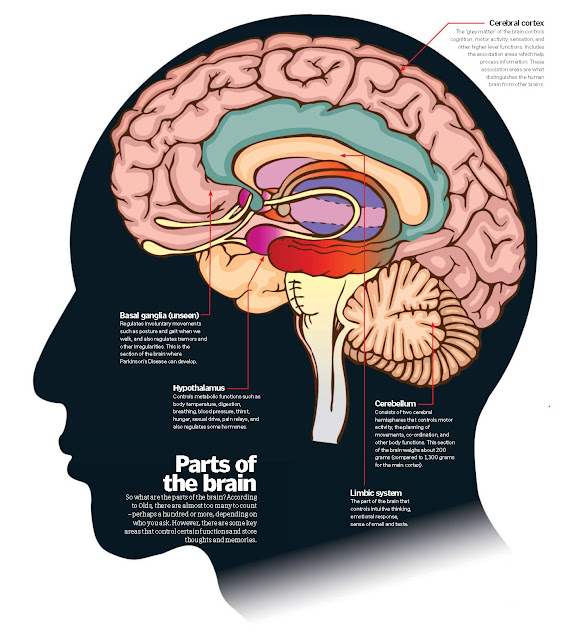 Basal ganglia (unseen)
Regulates involuntary movements such as posture and gait when we walk, and also regulates tremors and other irregularities. This is the section of the brain where Parkinson’s Disease can develop.
Hypothalamus
Controls metabolic functions such as body temperature, digestion, breathing, blood pressure, thirst, hunger, sexual drive, pain relays, and also regulates some hormones.
Cerebral cortex
The ‘grey matter’ of the brain controls cognition, motor activity, sensation, and other higher level functions. Includes the association areas which help process information. These association areas are what distinguishes the human brain from other brains.
Cerebellum
Consists of two cerebral hemispheres that controls motor activity, the planning of movements, co-ordination, and other body functions. This section of the brain weighs about 200 grams (compared to 1,300 grams for the main cortex).
Limbic system
The part of the brain that controls intuitive thinking, emotional response, sense of smell and taste.