Functions of The Cerebral Cortex


Functions of The Cerebral Cortex
The cerebral cortex is the wrinkling part of our brain that shows up when you see pictures of the brain. The outside world and making sense of it. The brain is actually a series of interconnected ‘superhighways’ or pathways that move ‘data’ from one part of the body to another.


Tallal says another way to think about the brain is by lower and upper areas. The spinal cord moves information up to the brain stem, then up into the cerebral cortex which controls thoughts and memories. Interestingly, the brain really does work like a powerful computer in determining not only movements but registering memories that can be quickly recalled.
According to Dr Robert Melillo, a neurologist and the founder of the Brain Balance Centers (www.brainbalancecenters.com), the brain actually predetermines actions and calculates the results about a half-second before performing them (or even faster in some cases). This means that when you reach out to open a door, your brain has already predetermined how to move your elbow and clasp your hand around the door handle – maybe even simulated this movement more than once, before you even actually perform the action.
Another interesting aspect to the brain is that there are some voluntary movements and some involuntary. Some sections of the brain might control a voluntary movement – such as patting your knee to a beat. Another section controls involuntary movements, such as the gait of your walk – which is passed down from your parents. Reflexes, long-term memories, the pain reflex – these are all aspects that are controlled by sections in the brain. 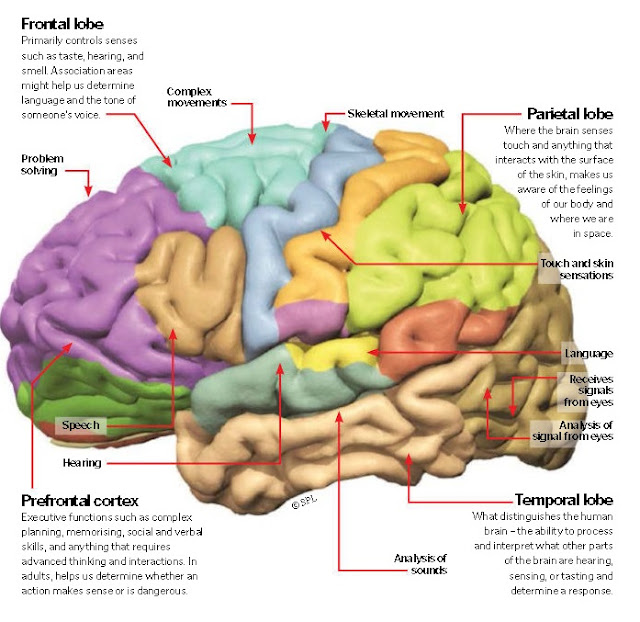 Frontal lobe
Primarily controls senses such as taste, hearing, and smell. Association areas might help us determine language and the tone of someone’s voice.
Prefrontal cortex
Executive functions such as complex planning, memorising, social and verbal skills, and anything that requires advanced thinking and interactions. In adults, helps us determine whether an action makes sense or is dangerous.
Parietal lobe
Where the brain senses touch and anything that interacts with the surface of the skin, makes us aware of the feelings of our body and where we are in space.
Temporal lobe
What distinguishes the human brain – the ability to process and interpret what other parts of the brain are hearing, sensing, or tasting and determine a response.