Testicular failure may be unicompartmental and involve only exocrine function (spermatogenesis), or it may be bicompartmental and involve exocrine and endocrine (androgen) function. Endocrine deﬁciency due to interstitial or Leydig cell failure almost uniformly includes spermatogenic failure. Hypogonadism was originally used to delineate endocrine deﬁciency but customarily also refers to exocrine failure. Absence (e.g., castration, agenesis) of the testis is termed anorchia (formerly “eunuchism”). The term eunuchoidal habitus has been used to indicate a male body conﬁguration that is characteristic of long-term androgenic deﬁciency, regardless of etiology. 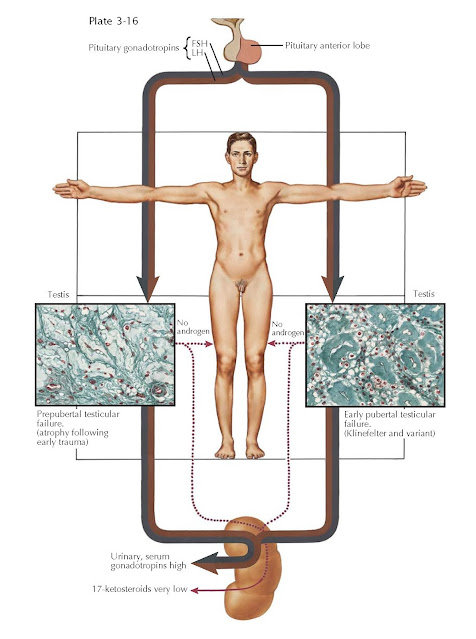 Primary testicular failure results from defects within the testis, usually occurring in the embryonic or prepubertal periods. Pituitary function is unimpaired, because there exists a compensatory rise in gonadotropin production during and after puberty. It is also called hypergonadotropic hypogonadism. There is generally signiﬁcant testicular atrophy, characterized histologically by sclerosis of the infantile (small) seminiferous tubules and a disappearance of Leydig cells in the interstitium and replacement with hyalinization. Genetic causes of testis atrophy include Klinefelter syndrome and its variants. Acquired causes are mumps with orchitis, bilateral trauma, neonatal or postnatal torsion, or cryptorchidism. Testis atrophy may also occur after chemotherapy or x-ray exposure from cancer therapy and as a consequence of bilateral inguinal herniorrhaphy.

The physical habitus of an affected male varies considerably, depending upon whether the testis failure occurs before, during, or after puberty. Persistence of prepubertal physical features after puberty with failure of pubertal progression occurs with testis failure in childhood or during puberty. Patients may be tall and thin owing to marked overgrowth of the long bones. Bone age and maturation may be greatly delayed, and open epiphyses have been observed in affected 25-year-olds. Generally, the legs and forearms grow disproportionately long, resulting in a greater distance from the symphysis to the heel than from the symphysis to the top of the head. The arm span exceeds that of height by one or more inches. Genu valgum and kyphosis in later life and signiﬁcant osteoporosis are also frequently encountered. The requirement for the development of eunuchoid features is androgen deﬁciency during the period of rapid growth at puberty, regardless of the reason. As such, these physical characteristics are not restricted to patients with primary testicular failure but are common to all types of testis failure. Indeed, castration or estrogen administration after puberty during adult life does not cause regression of male secondary sex characteristics and only minimally alters physical features, except for gynecomastia, obesity, and skin changes.