Testicular deﬁciency due to failure of the anterior pituitary to secrete gonadotropins is termed secondary or hypogonadotropic hypogonadism. The hypothalamus is known to regulate anterior pituitary function, mainly through gonadotropin-releasing hormone (also termed LH-releasing hormone, GnRH or LHRH), a 10–amino acid peptide secreted from neuronal cells in the preoptic and arcuate nuclei. The only known function of GnRH is to stimulate gonadotropin secretion. GnRH has a plasma half-life of approximately 5 to 7 minutes, and it exhibits several types of rhythmicity: seasonal; circadian, resulting in higher testosterone levels during the early morning hours; and pulsatile, with GnRH peaks occurring every 90 to 120 minutes. The importance of the pulsatile GnRH secretory pattern in normal testicular function is aptly demonstrated by the ability of exogenously given GnRH agonists (leuprolide acetate) to stop testicular testosterone production by changing pituitary exposure to GnRH from a cyclic to a constant pattern.

In Kallmann syndrome, characterized by congenital hypogonadotropic hypogonadism, the GnRH precursor neurons fail to migrate normally, with a subsequent absence of hypothalamic GnRH. Affected individuals present with delayed puberty or infertility due to lack of testosterone production. Because the GnRH neurons comigrate with olfactory nerves, Kallmann patients may also have anosmia. Causes of acquired pituitary hypofunction and secondary hypogonadism include severe stress, malnutrition, diabetes mellitus, chronic opiate use, sickle cell disease, and intracranial conditions such as prolactinomas, craniopharyngiomas, Rathke cleft cysts, and trauma. For this reason, pituitary imaging should be undertaken in all cases of acquired secondary hypogonadism. Notably, not all brain or pituitary tumors necessarily disturb gonadotropin secretion and result in secondary hypogonadism. 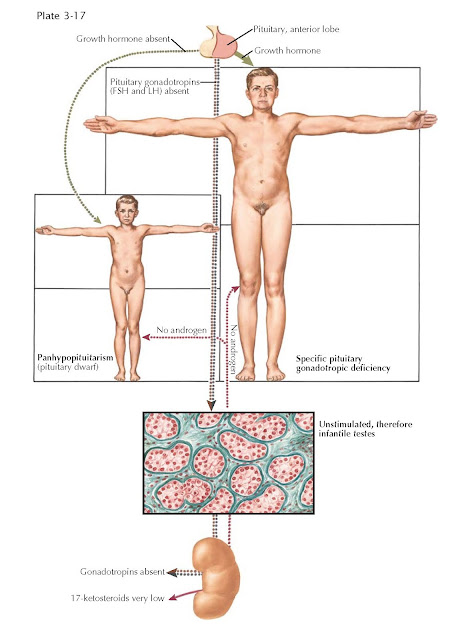 The clinical picture of secondary hypogonadism is a similar eunuchoid body morphology as that described for prepubertal or pubertal primary testicular failure (see Plate 3-16). There is retarded growth of the external sexual organs, with the penis remaining small (micropenis) and the scrotum underdeveloped (hypoplastic). The prostate and seminal vesicles are small but present. The testes vary from infantile to small adult size, but testicular size does not correlate well with androgen function, because Leydig cells comprise only 10% to 15% of testicular volume. Testis biopsies generally reveal infantile seminiferous tubules containing undifferentiated spermatogonia, Sertoli cells, and Leydig cells. The histologic picture is essentially that of a prepubertal boy (see Plate 3-4).

There may be a complete absence of beard and bodily hair, with ﬁne, sparse pubic hair characteristic of andro- gen deﬁciency. Baldness is rare with advancing age unless the patient is treated with androgens. Skin may be smooth, pale, ﬁne in texture, and dry, with little oiliness; acne rarely develops. The thyroid cartilage may be inconspicuous, and the voice high pitched. There may also be a striking lack of muscular development and complaints of extreme fatigability. There may also be behavioral problems inﬂuenced by the adjustment needed due to sexual immaturity.

The anterior pituitary also secretes growth hormone in response to hypothalamic growth hormone–releasing hormone, thyroid-stimulating hormone, and adrenocorticotropic hormone (ACTH). Thus, secondary hypogonadism can be associated with defective growth, hypothyroidism, and cortisol deﬁciency. When occurring together, this is referred to as panhypopituitarism. Boys with panhypopituitarism remain dwarfs, with greatly decreased height. However, they attain a mature skeletal ratio without disproportionate extremities or eunuchoid features. Pituitary dwarfs have infantile faces, acne-free skin, a lack of hair development owing to the deﬁcient ACTH, and very low adrenal androgen levels.

With secondary hypogonadism, gonadotropin levels are undetectably low in conjunction with low androgens. This differentiates it from primary hypogonadism. In isolated cases, adrenal androgens may be sufﬁcient to induce puberty and so the presenting symptom may simply be infertility later in life.