A lung abscess is a localized (usually >2 cm in diameter), suppurative, and necrotizing infectious process within the pulmonary parenchyma caused by either a respiratory or systemic illness. Most abscesses are primary and result from necrosis in an existing pulmonary process (usually an infectious pneumonia), although necrotization and secondary infection may result from a lung neoplasm. Between 8% and 18% of lung abscesses are associated with neoplasms in all age groups, but in patients older than age 45 years, as many as 30% have an associated cancer. Primary squamous carcinoma of the lung is the most common malignancy associated with abscess formation. An abscess can also result from a systemic process such as a septic vascular embolus (e.g., from right-sided endocarditis) or can be a secondary complication of a pulmonary process such as bronchial emboli (e.g., aspirated foreign bodies) or rupture of an extrapulmonary abscess into the lung (e.g., empyema).

Although any necrotizing pathogen can cause an abscess (such as Staphylococcus aureus, Pseudomonas aeruginosa, parasites, or mycobacteria), the classic lung abscess is caused by anaerobic bacteria. In the past 40 years, the incidence has declined 10-fold, although the mortality rate has decreased to 5% to 10%, presumably because of improved availability of antibiotics to treat pneumonia. 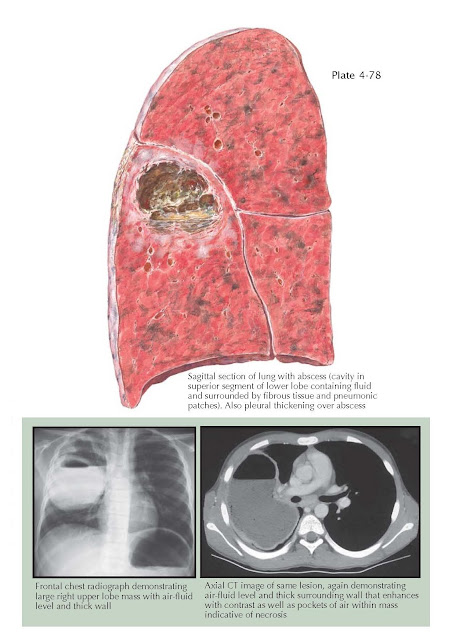 Most lung abscesses are caused by a mixed bacterial ﬂora, including anaerobes, up to 90% of the time. Aerobic organisms may be present in up to 50% of patients, but in most cases, they coexist with anaerobes. Typically, an abscess occurs when infected orogingival material is present in a host who has a predisposition to aspirate this material into a lung and who cannot adequately clear the challenge either because of impaired consciousness or because of exposure to a large inoculum (as in massive aspiration). Impaired consciousness can predispose to aspiration, as well as causing impaired clearance, but aspiration can also occur in those with oropharyngeal or esophageal dysfunction. At-risk patients are those with a history of alcoholism, seizure disorders, drug overdose, general anesthesia, protracted vomiting, neurologic disorders (e.g., stroke, myasthenia gravis, amyotrophic lateral sclerosis), esophageal diverticulum, and gastropulmonary ﬁstulas. Aspiration of orogingival material, especially from a patient with poor dental hygiene, is pathogenic, although aspiration of gastric contents may not always lead to infection, especially if the aspirate is only acid, in which case chemical pneumonitis may result.

Based on animal and some human data, the development of a lung abscess occurs 7 to 14 days after aspirating infectious orogingival material into the terminal bronchioles. The location of the abscess is determined by gravity and body position at the time of aspiration, making the most common sites the basal segments of the lower lobes, the superior segment of the lower lobe, and the posterior segments of the upper lobes. In general, the right lung is involved more than the left because of the straight direction of its take off from the trachea. (see Plate 4-79). Based on these principles, if an abscess occurs in an edentulous patient (without oral anaerobes) or in a location other than the ones dictated by gravity, there should be suspicion of an endobronchial obstruction, a gastropulmonary ﬁstula, or infection with a non-anaerobic organism (e.g., tuberculosis [TB]).

An acute lung abscess presents with symptoms of less than 2 weeks’ duration and is commonly caused by a virulent aerobic bacterial pathogen, although patients with a chronic lung abscess (symptoms lasting >4-6 weeks) are more likely to have an underlying cancer or an infection with a less virulent anaerobic agent. Most patients with lung abscess have an insidious presentation, with symptoms lasting at least 2 weeks before evaluation. Findings include cough, foul-smelling sputum that forms layers on standing, hemoptysis (in 25% of patients), fever, chills, night sweats, anorexia, pleuritic chest pain (in 60% of patients), weight loss, and clubbing. The presence of foul-smelling or putrid sputum is highly suggestive of anaerobic infection. A history of weight loss is also common, occurring in 60% of patients, with an average loss of between 15 and 20 lb, and this ﬁnding further raises the suspicion of malignancy. 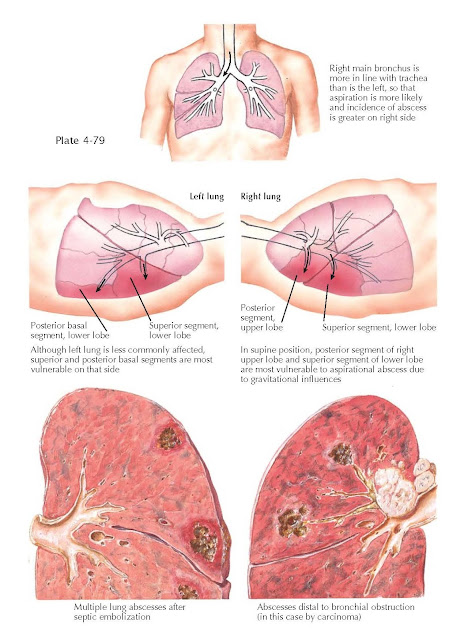 Sputum culture may have some value if it shows a speciﬁc nonanaerobic pathogen, but because the sample is expectorated through the oropharynx, the ﬁnding of anaerobes (which must be speciﬁcally sought) is of limited usefulness. Bronchoscopy may be valuable for ruling out endobronchial obstruction and for promoting abscess drainage. If the abscess is associated with an empyema, as is the case 30% of the time, then culture of the pleural ﬂuid may be valuable. Radiography is needed to deﬁne the presence of a cavitary lung lesion and typically shows a solitary cavitary lesion measuring 2 to 4 cm in diameter with an air-ﬂuid level. When there is extensive inﬂammation surrounding the abscess, infection is likely; neoplasms tend to have less surrounding radiographic inﬁltrate. Lung cavities caused by TB appear different and tend to be thin-walled and without air-ﬂuid levels. Sometimes it is necessary to use a computed tomography (CT) scan to distinguish a lung abscess from an empyema, the latter usually being conﬁned to the pleural space. On the CT scan, whereas a lung abscess usually appears as a thick, irregular-walled cavity with no associated lung compression, an empyema has a thin, smooth wall with compression of the uninvolved lung. When a lung abscess is complicated by a bronchopleural ﬁstula, it may be difﬁcult to distinguish from an empyema. If the radiograph reveals multiple cavitary lesions, it usually suggests a necrotizing pneumonitis caused by a virulent nonanaerobic organism and the possibility of septic pulmonary emboli.

Before the availability of antibiotics, treatment included supportive care, postural drainage with or without bronchoscopy, and surgery. Currently, the mainstay of therapy is antibiotics directed at orogingival anaerobes. The initial antibiotic is usually intravenous penicillin or clindamycin. Although penicillin has historically been the ﬁrst choice of therapy, recent trials have compared clindamycin with penicillin and found clindamycin to be associated with fewer treatment failures and a shorter time to symptom resolution. Metronidazole is not recommended and has had failure rates above 40%. Therapy is usually for a long duration, and until the pulmonary inﬁltrates have resolved or until the residual lesion is small and stable and the cavity closed. Many patients require a total of 6 to 8 weeks of antimicrobial therapy. Complications of lung abscess include empyema formation resulting from a bronchopleural ﬁstula, massive hemoptysis, spontaneous rupture into uninvolved lung segments, and nonresolution of the abscess cavity. Although uncommon, these complications often require prolonged medical therapy as well as surgical intervention, either with tube thoracostomy in the case of empyema or lung resection in the case of massive hemoptysis. Surgery for lung abscess is also used in the setting of fulminant infection and in patients who fail medical therapy.