Neurons fire like electrical circuits. Neurons are a kind of cell in the brain (humans have many cells in the body, including fat cells, kidney cells, and gland cells). A neuron is essentially like a hub that works with nearby neurons to generate an electrical and chemical charge. Dr Likosky of the Swedish Medical Institute says another way of thinking about neurons is that they are like a basketball and the connections (called axons) are like electrical wires that connect to other neurons. This creates a kind of circuit in the human body. Tallal explained that input from the five senses in the body cause neurons to fire.

“The more often a collection of neurons are stimulated together in time, the more likely they are to bind together and the easier and easier it becomes for that pattern of neurons to fire in synchrony as well as sequentially,” says Tallal. 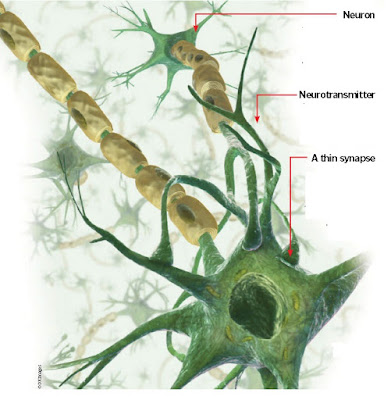 A neuron is a nerve cell in the brain that can be activated (usually by glucose) to connect with other neurons and form a bond that triggers an action in the brain.

A neurotransmitter is the electro-chemical circuit that carries the signal from one neuron to another along the axon.

A thin synapse (measuring just a few nanometres) between the neurotransmitter, carried along the axon in the brain, forms the electro-chemical connection.

TrackVis generates unique maps of the brain. TrackVis is a free program used by neurologists to see a map of the brain that shows the fibre connections. On every brain, these neural pathways help connect one part of the brain to another so that a feeling you experience in one part of the brain can be transmitted and processed by another part of the brain (one that may decide the touch is harmful or pleasant). TrackVis uses fMRI readings on actual patients to generate the colourful and eye-catching images. To construct the maps, the program can take several hours to determine exactly how the fibres are positioning in the brain. 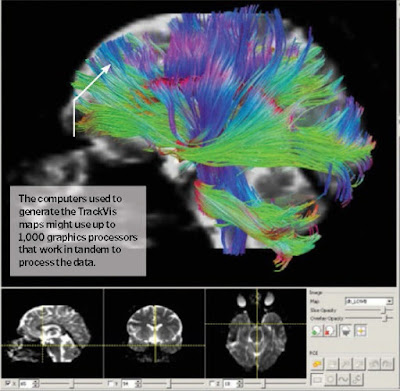 If you could hold it in your hand…In pictures that we are all accustomed to seeing, the human brain often looks pink and spongy, with a sheen of slime. According to Dr William Likosky, a neurologist at the Swedish Medical Institute (www.swedish.org), the brain is actually quite different from what most people would immediately think it is.

Likosky described the brain as being not unlike feta cheese in appearance – a fragile organ that weighs about 1,500 grams and sags almost like a bag filled with water.

In the skull, the brain is highly protected and has hard tissue, but most of the fatty tissue in the brain – which helps pass chemicals and other substances through membranes – is considerably more delicate.