Reactive arthritis (formerly known as Reiter’s syndrome) comprises a unique constellation of clinical findings. The syndrome is believed to be precipitated by an infectious agent, often shigella or chlamydia. 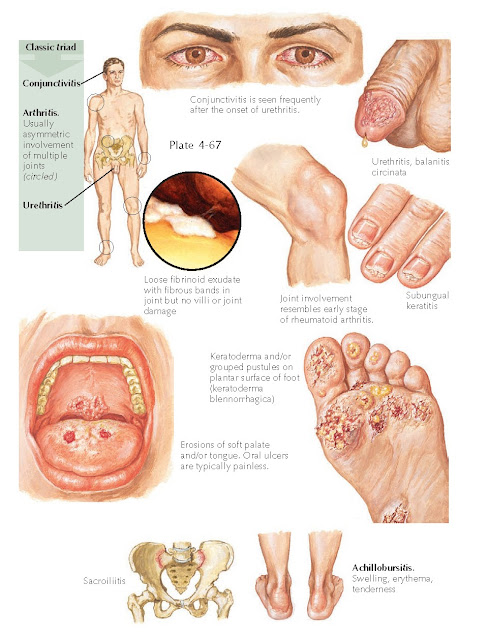 Clinical Findings: Reactive arthritis usually affects men in the third to fifth decades of life. The most frequent skin findings are balanitis circinata and keratoderma blennorrhagica. Balanitis circinata manifests as small psoriasiform, pink-to-red patches on the glans penis. It can appear identical to psoriasis. Keratoderma blennorrhagicum is less common than balanitis circinata. It occurs on the soles and palms, with the soles predominating. Small papulosquamous papules, patches, and plaques occur on the glabrous skin. Small, juicy papules and pustules can be scattered throughout the involved skin; the clinical appearance can mimic psoriasis. Some scholars think that reactive arthritis and psoriasis are one in the same, but other clinical findings of reactive arthritis make the two worthy of differentiation. The unique clinical hallmarks that separate reactive arthritis from psoriasis are the triad of urethritis, conjunctivitis, and arthritis. Urethritis typically is the initial clinical finding. It often begins a few days to 1 week after an infection. The infective agent that most commonly precipitates this syndrome is Chlamydia trachomatis. Gas-trointestinal bacterial infections have also been shown to initiate the reaction, including infections with Shigella flexneri, Salmonella species, Yersinia enterocolitica, and Campylobacter jejuni. Dysuria, urinary frequency, and pyuria can be the presenting findings. Women with severe urethritis can develop cervicitis, cystitis, and pyelonephritis. Men are prone to development of cystitis and prostatitis. A few days to weeks later, the affected patient develops conjunctivitis and arthritis. The conjunctiva is red and injected with a weeping exudate. Iritis and uveitis are rarely seen manifestations but can occur. Reactive arthritis is considered to be a seronegative form of arthritis. It is typically polyarticular and affects the large joints such as the knees and hips. The joints become swollen, red, and tender. Movement can be restricted because of pain. Most cases spontaneously resolve, but a subset of patients develop chronic progressive destructive arthritis.

Some patients develop nondescript small, discrete oral ulcers that can appear the same as aphthous ulcers. They can be nontender, and this feature can be helpful in differentiating them from other forms of oral ulcers. These ulcers spontaneously resolve in most cases. Laboratory testing show seronegativity. Testing for both the rheumatoid factor and antinuclear antibodies (ANA) is negative. The sedimentation rate is often extremely elevated. Patients frequently carry the human leukocyte antigen (HLA)-B27 marker. This is a marker that has been found to occur with a higher than expected frequency in patients with ankylosing spondylitis and reactive arthritis. However, most patients who test positive for the HLA-B27 marker never develop either of these conditions. There is no blood test that can make the diagnosis of reactive arthritis. Radiographs can be helpful in assessing joint inflammation and joint destruction. The diagnosis of reactive arthritis is made on clinical grounds. Most patients do not exhibit all of the findings mentioned, and the diagnosis is based on the number of clinical findings and the length of time the patient has had them. The American College of Rheumatology has published complicated criteria to help make the diagnosis.

Pathogenesis: The leading theory is that an infection in a susceptible individual sets off this immunological reaction. HLA-B27 seems to be a marker that is frequently positive in patients with reactive arthritis, but only a small subset of HLA-B27–positive patients develop the disease. The exact pathomechanism is unknown. Possibly, a bacterial antigen causes epitope spreading and initiates the autoimmune reaction.

Histology: The pathological findings are nondiagnostic and appear identical to those of psoriasis. Psoriasiform hyperplasia of the epidermis is prominent, along with neutrophils. Increased numbers of blood vessels are seen in the dermis.

Treatment: Any underlying infection must be sought and appropriately treated with the correct antibiotic therapy. Nonsteroidal antiinflammatory drugs are used to treat the arthritis. An ophthalmologist should be consulted to evaluate the globe. Corticosteroid eye drops are frequently used. Topical steroids can be used to treat the skin manifestations. Many patients experience a spontaneous remission in a few months.