Rosacea is an extremely common chronic dermatosis. This inflammatory dermatosis is associated with many triggers or initiating factors that can cause a flare of the inflammatory response. There are various forms, including erythematotelangiectatic, papular pustular, ocular, and phymatous varieties and rosacea fulminans. The erythematotelangiectatic form is the most common. Rosacea fulminans is the least common but by far the most severe form. 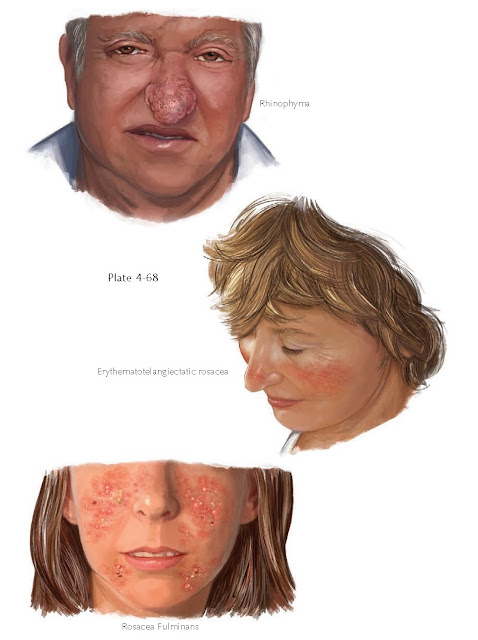 Clinical Findings: Rosacea is most often seen in Caucasians, especially those of northern European heritage. There is a slight overall female predominance. The phymatous form occurs almost exclusively in men. The peak age at onset has been estimated to be in the third to fourth decades of life. Most patients start with a subtle redness to their cheeks and nose. The forehead and ears are less commonly affected. Most patients notice a trigger or inciting factor that makes their skin flush. Triggers include alcohol, hot spicy foods, hot liquids (e.g., coffee, tea), and exposure to extremes of temperature. Patients can have any, all, or none of the typical triggers. On exposure to a trigger, patients often experience a warmth to the skin and flushing of the areas involved by rosacea.

The diagnosis is typically straightforward and is made on clinical grounds; however, the differential diagnosis in some cases can include other causes of flushing and lupus erythematosus. The butterfly rash of lupus erythematosus can look very similar, and occasionally a skin biopsy is required to help differentiate the two. This is unusual, because the systemic manifestations of lupus are not seen in rosacea. This scenario is most common when a patient with known lupus erythematous presents with a facial rash and the underlying lupus must be differentiated from co-existing rosacea as the cause.

Other common forms of rosacea are the papular pustular and ocular forms. Patients with the papular pustular form typically start off with the erythematotelangiectatic form and progress to this form over time. Not every case of erthematotelangiectatic rosacea progresses, however. Patients begin to develop crops of inflammatory papules and pustules, predominantly on the nose and cheeks. The forehead and chin can also be involved. The appearance can be hard to differentiate from acne, but these patients typically have triggers, some flushing, and a later age at onset. The back and chest are not involved by rosacea. Patients with ocular rosacea present with conjunctivitis and blepharitis. These are manifested clinically by redness of the conjunctiva and a feeling of “sand” in one’s eye. It can be a solitary finding, but it is more commonly seen in conjunction with skin disease.

Phymatous rosacea is caused by massive overgrowth of sebaceous glands with edema and enlargement of the structures affected. This is most common on the nose of men, in which cases it is called rhinophyma. The appearance of the nose can become distorted, leading to a red, edematous, bulbous deformity with accentuated follicular openings.

Rosacea fulminans is a rare variant that can have an acute onset of severe papules, pustules, nodules, and cyst formation.

Pathogenesis: The etiology of rosacea is unknown. Subtypes are most likely a heterogeneous group of similar-appearing disease states.

Histology: The findings on skin biopsy in rosacea depend on the form that is biopsied. The erthematotelangiectatic form typically shows a few dilated blood vessels and dermatoheliosis. A sparse, superficial lymphocytic infiltrate may surround adnexal structures. Papular rosacea shows perifollicular abscesses. An interesting finding with unknown relevance is that of multiple demodex mites within the hair follicle passage. A granulomatous form of rosacea can be seen histologically.

Treatment: Sun protection and sunscreen use are important for all patients with rosacea, especially the erthematotelangiectatic form. The use of topical and oral antibiotics (e.g., topical metronidazole, sulfacetamide, oral tetracyclines) has long been the mainstay of therapy. Topical azelaic acid has also been helpful. Avoidance of triggers is helpful in some individuals. Use of the 585-nm pulsed dye laser has led to excellent results in treating the underlying redness from telangiectatic blood vessels. Isotretinoin has been used in severe cases, including rosacea fulminans. Rhinophyma is typically treated with a surgical approach to debulk the extra tissue and reshape the nose.