Gastroesophageal reflux is defined simply as the passage of gastric contents into the esophagus. Gastroesophageal reflux disease (GERD) occurs when the content volume is abnormal and is associated with symptoms and/or gross esophageal injury. Within this definition are a multitude of mechanisms and symptoms, some of which are bothersome and some of which can lead to injury and even death. As a result, GERD may be arbitrarily divided into mild and severe forms. In the mild form, symptoms result from reflux but the caustic nature of the refluxant is not of sufficient strength, duration of esophageal exposure, and/or quantity to cause gross esophageal injury. 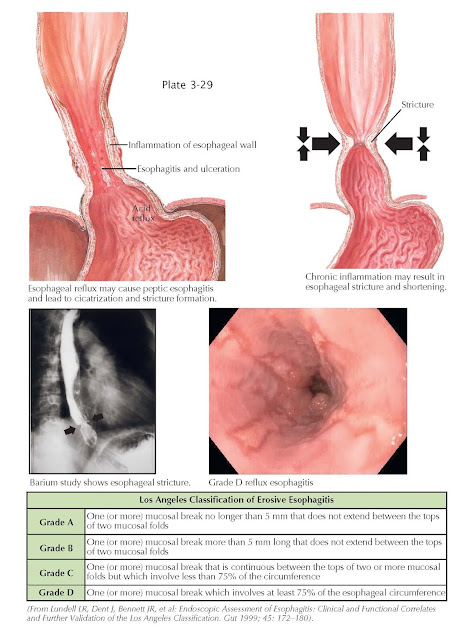 This type of reflux is likely explained by mild dysfunction of the normal mechanisms that prevent reflux from occurring. For example, with the normal transient opening of the lower esophageal sphincter that occurs with activities such as swallowing or belching, there is an excess of refluxed gastric content. This reflux is enough to initiate sensory activation, leading to symptoms such as heartburn or chest pain. Patients with this form of reflux are unlikely to progress to more severe forms and may have their symptoms controlled through medications such as proton pump inhibitors and/or lesser therapies such as lifestyle changes. On the other hand, the more severe form of GERD is one that allows far greater quantities of gastric content, such as acid, bile, and pepsin, into the esophagus to a degree that the normal squamous epithelium and other esophageal defense mechanisms are inadequate to prevent tissue injury. These patients develop erosions, ulceration, strictures, and/or meta­ plastic changes (Barrett esophagus). The mechanisms that contribute to this form of GERD include a hypo­ tensive lower esophageal sphincter, commonly in association with a sliding hiatal hernia, and nocturnal reflux in which the esophagus sits relatively defenseless without gravity or normal swallowing to help with clearance of refluxed caustic gastric contents. When erosive esophagitis occurs, it does so distally, with more extensive and proximal esophageal involvement increasing with greater quantities and proximal movement of esophageal acid and bile exposure. For the purposes of standardizing endoscopic findings in GERD, the Los Angeles Classification of Erosive Esophagitis was developed (see table, above). The importance of this classification lies not only in standardization but with determining treatment. For example, once erosive disease occurs in GERD, particularly grade B and higher, proton pump inhibitors are needed at the minimum to heal the esophagitis. With high grades of injury, higher doses and sometimes fundoplication may be needed. Also, because the mechanisms that lead to this degree of esophageal injury, such as a large hiatal hernia and incompetent lower esophageal sphincter, are not reversible, these patients need lifelong treatment with proton pump inhibitors or fundoplication to prevent relapse of injury.