Classification of esophageal foreign bodies is based on location and type. Location is generally divided into those impactions above and below the cricopharyngeus muscle. Foreign bodies located above the cricopharyngeus are at risk for causing respiratory compromise because of aspiration or tracheal compression. The latter condition is termed steakhouse syndrome. There may not be an obvious cause for this impaction other than poor chewing of a large food bolus or a foreign body that has difficulty passing through the upper esophageal sphincter. Nevertheless, areas of narrowing, as with a cricopharyngeal bar, may predispose to this problem. Foreign bodies caught below the cricopharyngeus are termed esophageal. Causes of foreign body impaction in the esophagus may be normal or abnormal areas of narrowing or, less commonly, motility disorders. For example, normal structures that compress the esophagus may include the aortic arch or the right atrium. Abnormal structures that may predispose to impaction of a foreign body include any cause of stricture (e.g., reflux, eosinophilic esophagitis, Schatzki ring, caustic ingestion, or radiation injury), esophageal cancer, or external compression from mediastinal adenopathy or a lung mass. Achalasia may sometimes present with foreign body impaction, particularly if a diverticulum is associated. 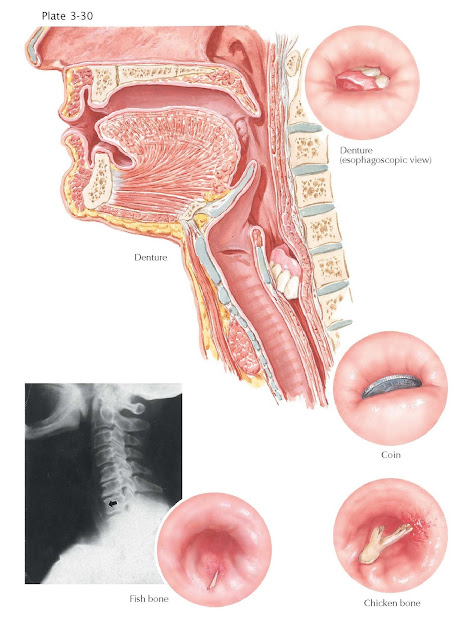 The type of foreign body that is impacted in the esophagus is important for management and risk of complications.  Food impactions tend to occur with chunky solids such as meats and breads, which pose the most difficulty passing through a compromised esophageal lumen. As the diameter of the esophageal diameter decreases, the chances of impaction increase. Food impactions may lead to severe complications for two reasons. First, when they completely obstruct, secretions may accumulate proximally in the esophagus and lead to aspiration. Second, with prolonged impaction, pressure necrosis and perforation of the esophageal wall may occur. As a result, urgent removal is indicated. For true foreign bodies, complications and management depend on the type of object. Objects with pointed or sharp edges, such as pins, bones, or broken glass, pose a high risk of perforation. Other objects pose additional risk to the esophagus by additional mechanisms. For example, button batteries may lead to esophageal wall necrosis from electric shock and from leakage of the caustic alkaline fluid contained in the cell. As in food impactions, immediate removal endoscopically or through other means is urgently needed.