An esophageal stricture is characterized by an area of the esophagus in which there is narrowing of the lumen, typically in response to an inflammatory/fibrotic and sometimes a neoplastic process. Strictures may be of variable length, diameter, and location, depending on the underlying cause. Numerous diseases and processes may lead to esophageal stricture formation. The variables that most affect stricture formation are the chronicity and severity of the inflammatory process and the extent of the esophagus involved. For example, acute inflammatory processes such as pill­induced esophagitis tend to lead to self­resolving strictures. In contrast, chronic conditions such as prior radiation exposure lead to long­standing fibrotic strictures in response to chronic unremitting inflammation. Similarly, a disease such as gastroesophageal reflux will most severely affect the distal esophagus given the greater likelihood of acid exposure when compared with the proximal esophagus. In contrast, eosinophilic esophagitis affects the entire esophagus and therefore may cause the entire esophagus to stricture. Other conditions that may involve the entire esophagus include lichen planus, caustic ingestion, and prolonged nasogastric tube use. 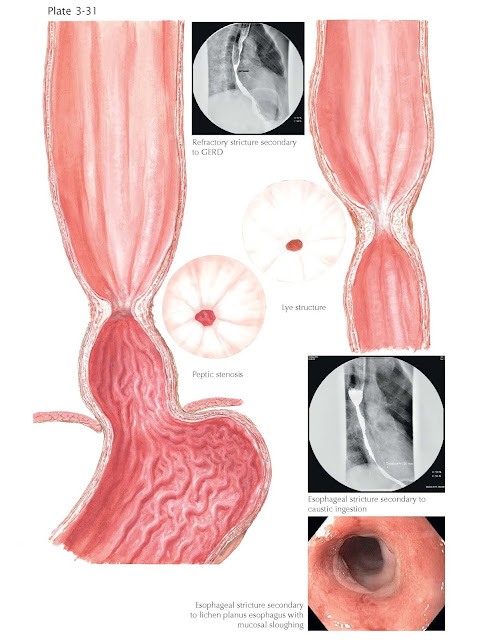