RUPTURE AND PERFORATION OF ESOPHAGUS

RUPTURE AND PERFORATION OF ESOPHAGUS

Disorders of esophageal rupture and perforation are generally divided into those that present de novo and those that are a result of an iatrogenic complication. Primary esophageal rupture occurs most commonly with prolonged retching (Boerhaave syndrome). There are two scenarios in which this is well described. The first is in response to prolonged and forceful retching, particularly in a patient with heavy alcohol use. The second is in a patient with retching secondary to food bolus impaction. In either situation, a large tear of the distal esophagus occurs, with free rupture into the pleural space, often with fluid translocation. Boerhaave syndrome is associated with high rates of morbidity and mortality due to the severity of an associated underlying illness such as alcoholism and the contamination of the pleural and/or mediastinal cavity from food and bacteria, as is typical of food impaction. The diagnosis is suspected in a patient with prolonged retching who presents with severe chest and epigastric pain, fever, crepitus, and sepsis. Diagnosis is suspected on chest radiography with mediastinal and subcutaneous air and confirmed with an esophageal contrast study using Gastrografin. Whereas treatment almost always included surgery in the past, an alternative has become esophageal stenting, drainage of pleural cavity collections, and giving broad­spectrum antibiotics as early as possible. 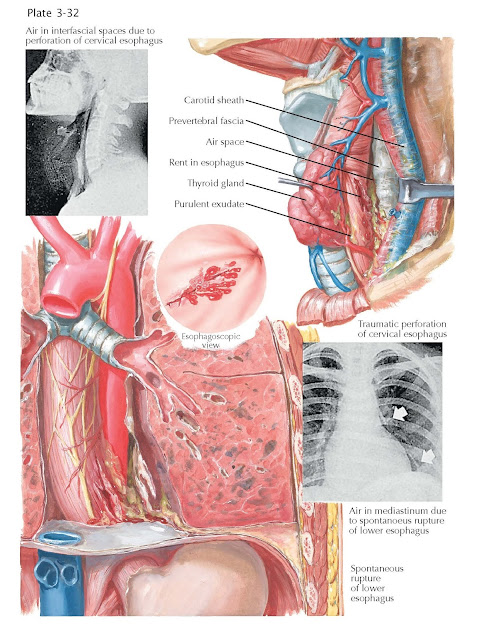 Most perforations of the esophagus occur as a result of endoesophageal iatrogenic instrumentation. Of these, gastrointestinal endoscopy is the most common.

Although routine diagnostic esophagoscopy rarely leads to perforation, adjunct procedures such as dilation of strictures and sphincters, removal of a foreign body, or mucosal resection or ablation pose an increased risk for full penetration of the esophageal wall. Cardiac devices such as transesophageal echocardiography or cardiac ablation techniques may also lead to esophageal rupture. Intubating the esophagus with a rigid tube such as a rigid endoscope or overtube also poses an increased risk for perforation.