The most common benign tumor of the esophagus is a granular cell tumor (GCT). GCTs are stromal lesions originating from the Schwann cells of the submucosal neuronal plexus and are S100 positive on histologic staining. About 5% to 11% of GCTs occur in the gastrointestinal tract, of which one third occur in the esophagus. These tumors are usually detected incidentally during endoscopy with a submucosal appearance and characteristic overlying yellow or white hue. They may occur anywhere in the esophagus and may be multiple. They appear to be of low malignant potential, though endoscopic mucosal resection can be safely performed. Leiomyomas are uncommon benign tumors of the esophagus derived from smooth muscle cells. They may be found incidentally during endoscopy or present with dysphagia, with sizes up to 10 cm reported. They are most commonly found in middle­aged men in the midesophagus, though they may be found in all esophageal locations. Malignant transformation is rare, but there is some support for early removal through thoracoscopic enucleation to prevent progression to a size large enough to cause symptoms and require more extensive surgical resection. Gastrointestinal stromal tumors of the esophagus are similar mesenchymal tumors but are even rarer in the esophagus. They derive from interstitial cells of Cajal and are c­kit positive on histologic staining. The treatment approach is similar to that for leiomyomas. 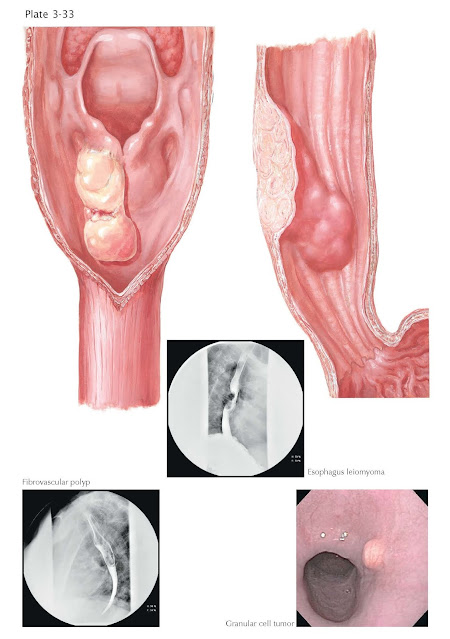 Fibrovascular polyps are rare benign esophageal tumors occurring typically in the proximal esophagus. They are composed of a variable mixture of fibrous tissue, fat, and vascular elements. They may reach a large size and typically present with dysphagia once symptomatic. Classically, patients may note regurgitation of a large mass that snaps back with swallowing. As a result, there is also a risk of asphyxiation. Treatment is surgical resection that may be performed intraluminally in many patients. Inflammatory esophageal polyps are also likely reactive growths and are approached in a manner similar to that for fibrovascular polyps.