Defining the presence of Barrett esophagus is unfortunately easier said than done for two reasons: (1) There is no clear definition of the endoscopic appearance of a normal squamocolumnar junction and, there­fore, of what defines a clear demarcation between the esophagus and the proximal stomach. This is problematic because nearly 20% of normal adults have metaplastic tissue in the gastric cardia adjoining the distal esophagus, leading to confusion when a putative esophageal biopsy is taken errantly from the gastric side. As a result, many patients are mislabeled as having Barrett esophagus from biopsies taken incidentally from the gastric cardia. (2) It is primarily the intestinalized metaplastic tissue that carries the premalignant potential of Barrett esophagus. On the other hand, esophageal metaplastic epithelium is commonly admixed with both cardiac and intestinal metaplasia, making the finite sampling of endoscopic biopsies limited in confirming the presence of extant intestinal metaplasia. As a result, the British guidelines include both gastric and intestinalized epithelium in the definition of Barrett esophagus. Diagnostic criteria thus vary amongst gastrointestinal societies. 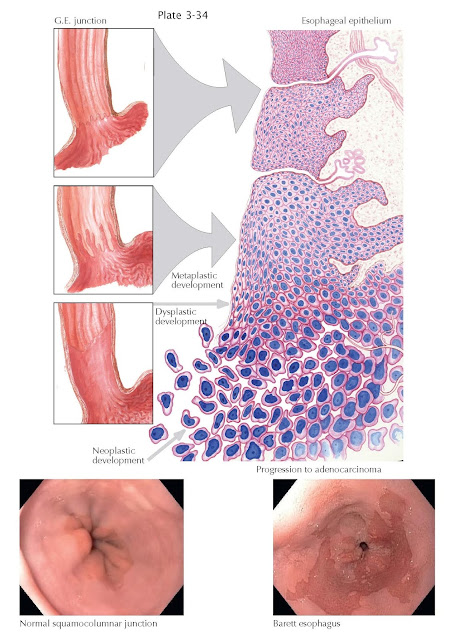 Endoscopically, the distal esophagus is examined for the appearance of a salmon­colored mucosa, different from the normal pink­white squamous mucosa, encroaching proximally at the normal squamocolumnar junction. For the reason cited above, however, arbitrary minimum lengths of this encroachment may be defined from 1 mm to 2 cm above the gastroesophageal junction.  Patients are somewhat arbitrarily divided into those with long­segment disease (> 3 cm) or shortsegment disease (< 3 cm). The Prague classification more precisely categorizes the extent of the circumferential and maximal lengths of grossly metaplastic epithelium.

There are two concerns with Barrett esophagus. The first is that it represents a severe form of gastroesophageal reflux with an associated risk of erosive esophagitis and stricture formation. The second is that it has premalignant potential given the cellular instability of metaplasia. Although the estimates of developing adenocarcinoma are low (0.2% to 0.4% per year), they are derived from surveillance programs that miss most prevalent forms of adenocarcinoma. Treatment consists of controlling the reflux pharmacologically or surgically and asking the patient to participate in endoscopic surveillance programs for potential detection of dysplasia and cancer. For patients who develop dysplasia, there is also the evolving option of radiofrequency ablation of the Barrett mucosa and/or endoscopic mucosal resection to avoid de elopment of cancer and the need for esophagectomy.