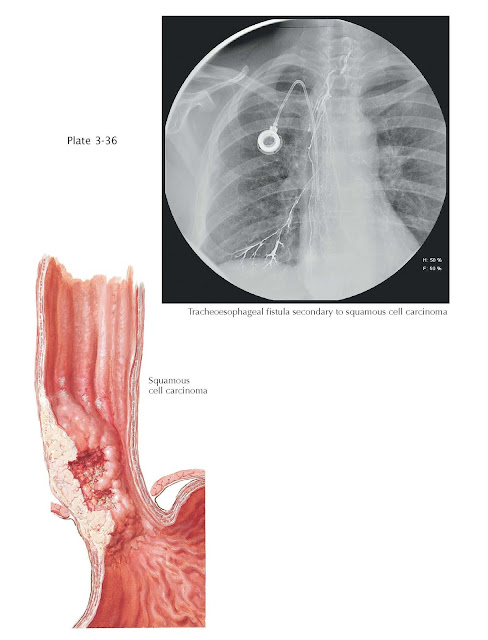 Nevertheless, worldwide it is still the most common type of esophageal cancer, particularly in China and Africa. In addition to smoking and alcohol, other risk factors such as infection with human papillomavirus or Epstein­Barr virus and other environmental and dietary exposures have been proposed. Additionally, a history of squamous cell carcinoma of the head and neck increases the chances of subsequent esophageal cancer. Unlike adenocarcinoma, there is no clear underlying condition that allows targeting of specific populations for screening and surveillance other than certain geographic locations and lifestyle factors as discussed. It is more common in men than women. The most common presenting symptoms are dysphagia and weight loss. Endoscopy is the most reliable means of diagnosis; a mass lesion is most commonly found in the proximal esophagus. Given the proximal location of squamous cell esophageal cancer, catastrophic complications, including fistulae to the respiratory tract or aorta, may develop. Staging is defined in a manner similar to that for adenocarcinoma, but treatment involves less surgery given the complexities of esophageal resection when the tumor is high in the proximal esophagus adjacent to respiratory structures.