Stationary esophageal manometry as a measure of esophageal motility has been in use for over 50 years. Although it has become essential for disorders such as achalasia, its accuracy and reliability have been questioned for several reasons: (1) Only a small number of unidirectional pressure transducers can be used for recording. (2) Due to a relatively short catheter length, areas of the esophagus must be analyzed during different time periods by pulling the manometric catheter through the various esophageal segments. (3) There is only a measure of pressure and not of corresponding bolus transit. With the advent of high­resolution impedance manometry, these limitations have been overcome. This results from the design of a catheter that can measure pressures with 36 transducers, including circumferential transducers. This catheter also spans the length of the esophagus for simultaneous measurement of both the upper and lower esophageal sphincters and the esophageal body that allows the study of simultaneous esophageal parameters. Complete esophageal motor function may be measured in response to stimuli, such as swallowing, with far greater accuracy and ease. Bolus transit can be measured, also simultaneously, by transducers that measure impedance. This functions on the principle of Ohm’s law that Voltage (V) = Current (I)/Resistance (R). Within the catheter, voltage is generated between adjacent electrodes and the generated current is a function of the resistance or impedance to current flow. When an electrolyte­rich fluid passes over the electrodes, the current is easily conducted due to the low resistance and high conductivity of this fluid, and therefore measured impedance to current will be low. If one measures impedance over a series of electrodes that span the transesophageal catheter, one can measure the direction and velocity of the movement of an administered bolus. Thus, giving a water swallow as part of the standard protocol for performing high­resolution manometry will assess not only the esophageal body and sphincter pressure dynamics but also the water flow that occurs with these pressure changes. Measurement of impedance will distinguish different types of substance in the esophagus by their conductive properties.

A catheter that independently measures esophageal impedance may also be used for diagnosis in disorders such as gastroesophageal reflux. When such a catheter is made ambulatory and is combined with pH recording, a continual measurement of bolus movement and pH can be made over relatively long periods of time out of the hospital. An ambulatory pH/impedance catheter can measure all fluid that refluxes into the esophagus in addition to the degree of acidity. This test currently serves as the gold standard for diagnosis of either acid or nonacid gastroesophageal reflux. This test may be performed with all therapies suspended to establish a baseline degree of gastroesophageal reflux, or with therapy continuing to determine if persisting symptoms are due to inadequate reflux therapy or another cause. 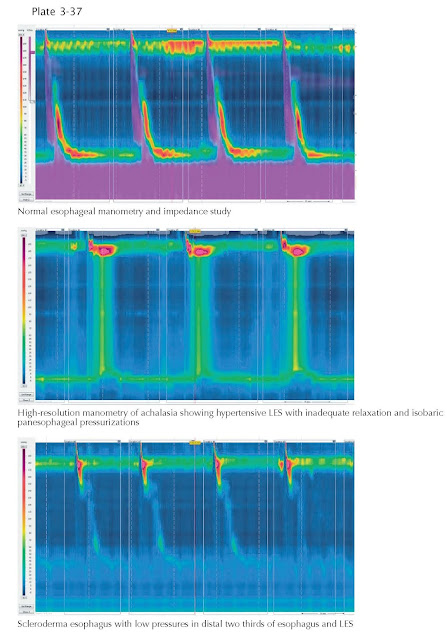 Although endoscopy has revolutionized the practice of medicine, it is confined by its ability to recognize lesions that appear abnormal only through white light inspection. It is limited in visualization of more subtle but important mucosal abnormalities such as dysplasia. One of the major ongoing refinements of standard endoscopy is using enhanced imaging techniques to visualize mucosal patterns in greater detail. Narrow band imaging (NBI) is a technique in which a filter is used in the endoscope to enhance light wavelengths for blue and green. These colors are used to enhance visualization of blood vessels through uptake of these wavelengths by hemoglobin. With more detailed imaging of changes in mucosal vascularity and mucosal patterns around these vessels, there is greater accuracy in differentiating hyperplasia from dysplasia as well as different grades of dysplasia and cancer. Studies have shown that in premalignant conditions such as Barrett esophagus, use of NBI improves the diagnostic capability of endoscopy and allows for targeted biopsies of suspicious lesions seen with NBI but not white light endoscopy.

Confocal laser endomicroscopy (CLE) is a probe­based technique in which the application of a laser blue light to the mucosal epithelium yields an image that is nearly as precise as a histologic image. The probe is passed through the endoscope and embedded in areas of suspected mucosal abnormalities. A dye is used to high­ light cellular structures such as the nuclei or cytoplasm, depending on the dye used. Evolving technology, known as volumetric laser endomicroscopy, is focusing on a means of broader mucosal imaging rather than point­directed visualization. Similar to NBI, the goal of CLE is to give further detail on cellular and tissue morphology, particularly in detecting dysplasia.