Autism spectrum disorders (ASD), also known as pervasive developmental disorders, are a group of mental health problems in children and adolescents characterized by severe impairments in several areas of development, including communication, social interaction, and range of interests and activities. Prevalence rates for ASDs are now estimated at about 1 in 110 children in the United States. The prevalence of children with ASD has now surpassed rates of children with well-known conditions such as cancer. For educational purposes, this means that most elementary schools with a population of 500 children will have 4 or 5 children with ASD. The greatest risk factor for ASD is being male with autism, occurring approximately four times more often in boys than girls. The pathophysiology of these pervasive developmental disorders is not known, but it is believed to be an inherited abnormality in the structure and function of certain parts of the brain, including those that govern the development of social relatedness and language.

The most severe of these disorders, autistic disorder, is characterized by markedly abnormal development in communication and social interaction and a markedly restricted range of activity and interests. There may be a complete lack of language, or, if language is present, it does not serve to initiate or sustain conversation with others. There is severe impairment in the ability to form social relationships and to understand others’ feelings. The child may not babble, point, smile, or make meaningful gestures; he or she may have poor eye contact, may appear to be hearing impaired, and may not know how to play with toys or engage in make believe play. The child often has very restricted patterns of interest and may show little interest in the environment. There may be inflexible routines that serve no function and repetitive behaviors such as hand-flapping or body-twisting. To meet the diagnosis, the disorder must have been present before age 3 years. Autistic disorder is accompanied by intellectual disability in up to 60% of cases, and seizures are often also present in the children who have intellectual disability.

A less severe type of these disorders, Asperger disorder, is characterized by all of the above problems, without language impairment and intellectual disability. Children with Asperger disorder who have stronger verbal skills are sometimes referred to as sounding like little adults and struggle to pick up on the normal “give and take of a conversation.” They often have very highly developed interest in and knowledge about a narrow topic. To meet the diagnosis, there must be impairment in the youth’s function at home, at school, or with peers. If some of the above behaviors are present, but not enough to meet the diagnoses, the disorder is called pervasive developmental disorder, not otherwise specified. 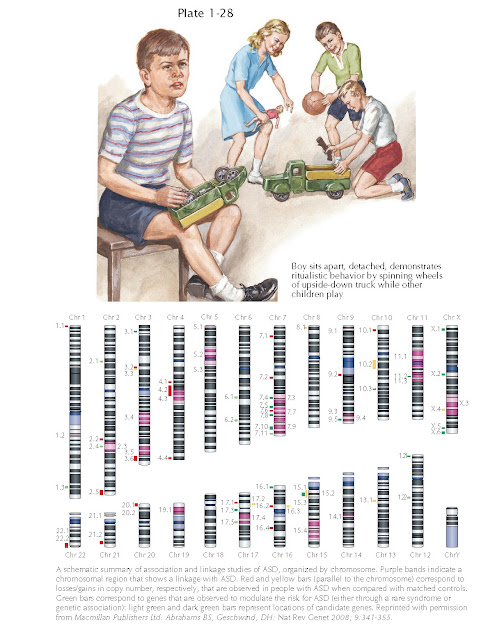 Ideally, the evaluation should be conducted by a multidisciplinary team of expert clinicians, including a child psychologist, speech pathologist, and a medical professional with developmental expertise (e.g., a child psychiatrist, developmental behavioral pediatrician, neurodevelopmental pediatrician, or child neurologist), in order to address essential aspects of the child’s developmental skills. The evaluation for these diagnoses is complex, and requires input from multiple people who know the child well. A diagnosis of ASD is based on descriptions of behavior from interviews, questionnaires, and a direct behavioral examination. Genetic testing is recommended because single-gene disorders or genetic variations associated with autism are seen in ≈10%.

The treatment of autism spectrum disorders is aimed at enhancing the communication, social, and intellectual development of the child through language and social skills therapies and educational tutoring. The majority of these treatments are designed to take place in the home or at school. There is no single best treatment package for all children with ASD; however, early intervention has been identified as very important for these children, and most individuals with ASD respond well to highly structured, specialized programs.

The autism spectrum disorders tend to be lifelong problems. Children with these disorders who are identified early, who have relatively intact language and intellectual abilities, and receive intensive treatment have the best outcomes.