Rett syndrome (RTT; Online Mendelian Inheritance in Man [OMIM]: phenotype #312750; gene/locus #300005) is a neurodevelopmental disorder first noted about 1960 by the Austrian developmental pediatrician Andreas Rett and the Swedish child neurologist Bengt Hagberg. RTT is the leading genetic cause of severe intellectual disability in females. Its incidence is approximately 1:10,000 female births.

After a normal pregnancy and delivery, early development is apparently normal through age 6 months; however, retrospectively, subtle deviant patterns occur, including deceleration of acquired head growth. Developmental progress stalls between 6 and 18 months, followed by frank regression of fine motor skills and communication function, including loss of acquired language with poor visual and aural interactions suggesting autism.

Concomitantly, stereotyped hand movements appear during wakefulness: hand-wringing, hand-mouthing, hand-clapping or patting, or unusual finger movements. Each girl develops her own repertoire, generally evolving over time. Subtle stereotypies occur in the feet and circumorally. Although gait is acquired in about 80%, approximately 20% of Rett children require assistance. It is subsequently lost in about 25% to 35%, becoming considerably dyspraxic in the remainder, with broad-based, semipurposeful patterns, toe-walking, or retropulsion. Overall, about 70% are able to walk, 20% of whom require assistance.

There are common associated medical problems. Periodic breathing consists of breath-holding, hyperventilation, or a combination. This is prominent between ages 5 and 15 years, being exacerbated by unfamiliar or stressful circumstances, including large crowds or new surroundings. Gastrointestinal dysfunction includes disordered chewing and swallowing, gastroesophageal reflux, delayed stomach emptying, constipation, gall-bladder dysfunction, and impaired growth, all related to the neurologic underpinnings of Rett syndrome. Epilepsy and scoliosis are increasingly common throughout childhood and adolescence, ultimately occurring in 80%.

Seizures are infrequent before age 2 years, may be generalized or partial and usually easily managed. Many girls have unusual behaviors (“vacant spells”) that are difficult to distinguish from epilepsy, thus requiring video electroencephalographic monitoring. Scoliosis becomes evident by age 4 years, with greater severity in hypotonic children lacking ability to maintain independent upright posture. Surgery is required in 12% to 14%, often improving quality of life. Bracing is employed with greater frequency; its effectiveness is inadequately evaluated. Feet and hands are generally small, unusually cold, and discolored. 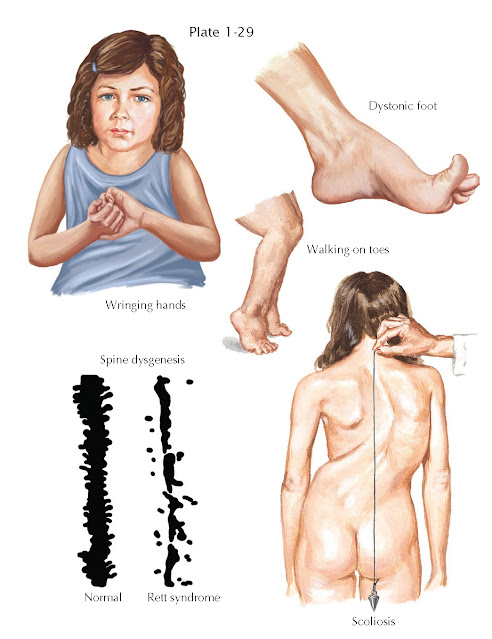 At present, 95% or more of those with features consistent with RTT have a mutation in the MECP2 gene (coding for methyl-CpG-binding protein 2), located at Xq28. MECP2, a member of a family of methyl-binding proteins, is an epigenetic regulator of a large and increasing number of genes, including BDNF (brain-derived neurotrophic factor) and CRH (corticotrophin- releasing hormone). Reduced growth of dendrites and their spines are present throughout the cerebral hemispheres (an explanation for deceleration of head growth) and brainstem. All neurotransmitter function is impaired, with an imbalance between excitatory (principally glutamatergic) and inhibitory (chiefly GABAergic) expression. Conditional knockout mouse models indicate the diverse functional impact in specific neural centers. For example, knockout of GABAergic function in the forebrain, sparing the brainstem, results in an absence of periodic breathing abnormalities.

In general, RTT is a sporadic condition with recurrence in the family being <<0.1%. In 75% or more, new mutations derive from paternal germ lines. In the small number of familial cases, the mother carries the gene but is normal or shows mild cognitive impairment or a learning disability due to favorable skewing of X-chromosome inactivation. The differential diagnosis includes autism, Angelman syndrome, and the neuronal ceroid lipofuscinoses.

Males with mutations in MECP2 have a progressive disorder, the abnormal gene being expressed in all cells. Duplication of MECP2 produces another distinctive disorder that is modified by the involvement of other genes. These males are quite abnormal, whereas their mothers, 70% (or more) of whom carry the same duplication, appear normal yet have significant obsessive- compulsive behaviors.

At present, substantial research is being conducted in mouse models of RTT/MECP2 mutants, and a number of clinical trials are ongoing or in planning stages. Despite this, specific treatment designed to provide a cure remains elusive.