The cerebrum is divided into right and left hemispheres by a longitudinal fissure. Each hemisphere has three surfaces-superolateral, medial, and inferior-all of which have irregular fissures, or sulci, demarcating convolutions, or gyri. Although there are variations in arrangement between the two hemispheres in the same brain and in those from different persons, a basic similarity in the pattern allows the parts of the brain to be mapped and named. 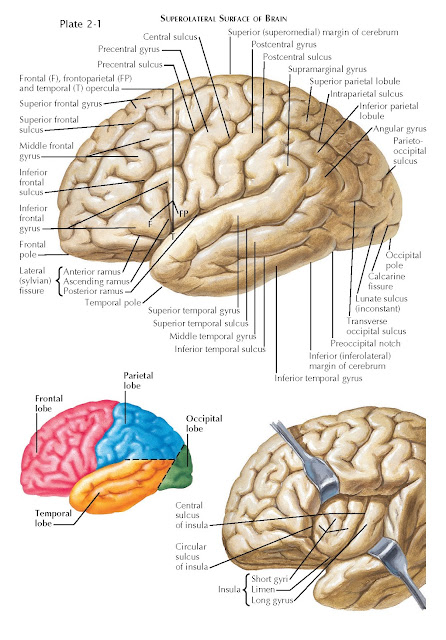 On the superolateral surface, two sulci, the lateral and the central, can be easily identified. The lateral (sylvian) sulcus has a short stem between the orbital surface of the frontal lobe and the temporal pole; in life, the lesser wing of the sphenoid bone projects into it. At its outer end, the stem divides into anterior, ascending, and posterior branches. The anterior and ascending rami are each about 2.5 cm long; the former runs horizontally into the inferior frontal gyrus, and the latter, vertically. The posterior ramus is about 7.5 cm long and inclines upward as it extends backward to end in the supramarginal gyrus, which is part of the inferior parietal lobule. These rami separate triangular areas of cortex called opercula, which cover a buried lobe of cortex, the insula.

The central (rolandic) sulcus proceeds obliquely down-ward and forward from a point on the superior border almost halfway between the frontal and occipital poles. It is sinuous and ends above the middle of the posterior ramus of the lateral sulcus. Its upper end usually runs onto the medial surface of the cerebrum and terminates in the paracentral lobule.

The parietooccipital sulcus is situated mainly on the medial surface of the cerebrum, but it cuts the superior margin and appears for a short distance on the superolateral surface about 5 cm in front of the occipital pole. At about the same distance from the occipital pole on the inferior margin, there is a shallow indentation, the preoccipital notch, produced by a small ridge on the upper surface of the tentorium cerebelli.

Frontal Lobe. The superolateral surface of the frontal lobe is traversed by three main sulci and thus divided into four gyri. The precentral sulcus runs parallel to the central sulcus, separated from it by the precentral gyrus, the great cortical somatomotor area. The superior and inferior frontal sulci curve across the remaining part of the surface, dividing it into superior, middle, and inferior frontal gyri.

Parietal Lobe. The parietal lobe has two main sulci, which divide it into three gyri. The postcentral sulcus lies parallel to the central sulcus, separated from it by the postcentral gyrus, the great somatic sensory cortical area.

The remaining, larger part of the superolateral parietal surface is subdivided into superior and inferior parietal lobules (gyri) by the intraparietal sulcus, which runs backward from near the midpoint of the postcentral sulcus and usually extends into the occipital lobe, where it ends by joining the transverse occipital sulcus.

Occipital Lobe. The outer surface of the occipital lobe is less extensive than that of the other lobes and has a short transverse occipital sulcus and a lunate sulcus; the latter demarcates the visuosensory and visuopsychic areas of the cortex. The calcarine sulcus notches the occipital pole. 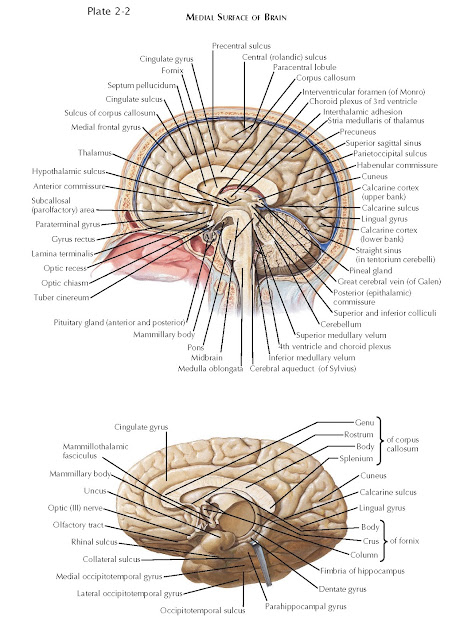 The medial surfaces of the cerebral hemispheres are flat, and, although separated for most of their extent by the longitudinal fissure and falx cerebri, they are connected in parts by the cerebral commissures and by the structures bounding the third ventricle.

Corpus Callosum. The corpus callosum is the largest of the cerebral commissures, and forms most of the roof of the lateral ventricle. In a median sagittal section, it appears as a flattened bridge of white fibers, and its central part, or trunk, is convex upward. The anterior end is recurved to form the genu, which tapers rapidly into the rostrum. The expanded posterior end, or splenium, overlies the midbrain and adjacent part of the cerebellum. The corpus callosum is about 10 cm long and 2.5 cm wide between the points where it sinks into the opposing hemispheres in the depths of the corpus callosal sulcus. Its fibers diverge to all parts of the cerebral cortex.

Fornix. Below the splenium and trunk of the corpus callosum are the symmetric arching bundles (crura of the fornix) that meet to form the body of the fornix and separate again to become the columns of the fornix, curving downward to the mammillary bodies. The body of the fornix lies in the roof of the third ventricle, and the tela choroidea is subjacent; the lateral fringed margins of this double fold of pia mater are the choroid plexuses of the central parts of the lateral ventricles, while an extension from the underside of the fold in the midline forms the choroid plexus of the third ventricle.

Cingulate Sulcus. The cingulate sulcus is easily identified on the medial surface, lying parallel to the corpus callosum. It begins below the genu of the corpus callosum and ends above the posterior part of the trunk by turning upward to cut the superior margin of the hemisphere. Opposite the middle of the trunk is another vertical branch sulcus, and the area of cortex between these ascending sulci is the paracentral lobule, which contains parts of the motor and sensory cortical areas. The cingulate sulcus separates the medial frontal and cingulate gyri, and below the genu and rostrum of the corpus callosum are small parolfactory sulci separating the subcallosal (parolfactory) areas and paraterminal gyrus. Posterior Medial Surface. The posterior part of the medial surface has two deep sulci. The upper parietooccipital sulcus inclines backward and upward to cut the superior border. The lower calcarine sulcus extends forward from the occipital pole to end beneath the splenium of the corpus callosum, and the isthmus of cortex between them connects the cingulate and parahippocampal gyri. The wedge-shaped region between the parietooccipital and calcarine sulci is the cuneus, while the area between the parietooccipital sulcus and the paracentral lobule is the precuneus. The main visuo- sensory area is located in the walls of the calcarine sulcus and in the adjacent cortex. 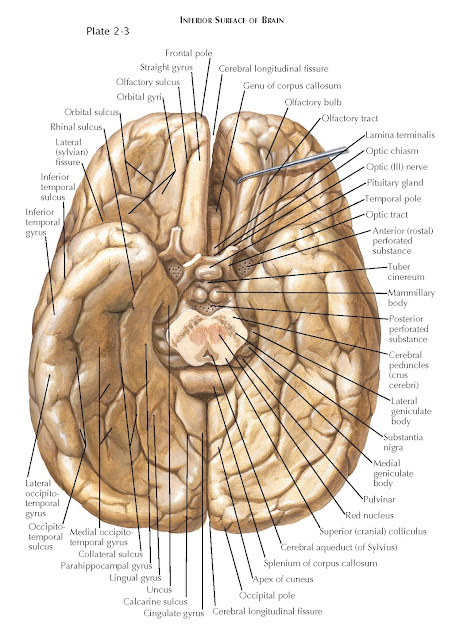 The inferior surface is divided by the stem of the lateral sulcus into smaller, orbital and larger, tentorial surfaces.