In humans, the cerebral cortex is highly developed, and the complexity of the interhemispheric and intrahemispheric connections parallels this degree of development. The cerebral cortex has definite areas related to specific neurologic functions, either for primary sensory reception or for complex integrated activity.

Association Pathways. When one cortical area is activated by a stimulus, other areas also respond. This is due to the rapid activity along a large number of precisely organized, reciprocally acting association pathways. The pathways may be very short, linking neighboring areas and running only within the gray matter, or they may be longer (arcuate) bundles, passing through the white matter to connect gyrus to gyrus or lobe to lobe within a cerebral hemisphere intrahemispheric connection. Other commissural bundles conduct interhemispheric activity: the most prominent are the corpus callosum, a large band of fibers, which lies immediately beneath the cingulum; the anterior commissure, which connects both temporal lobes; and the hippocampal commissure (commissure of the fornix), which connects the right and left hippocampus. 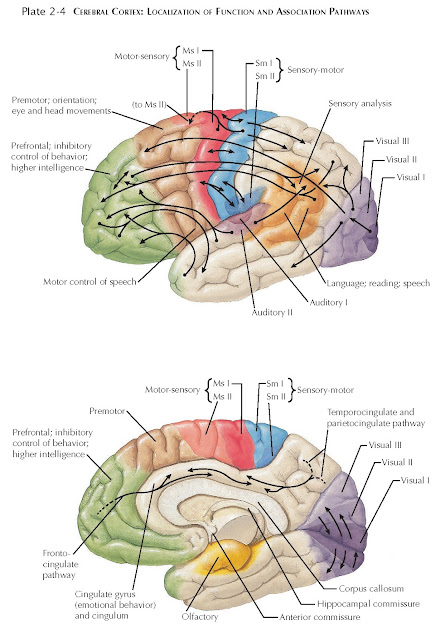 The reciprocal activity of the connections in the cerebral cortex ensures the coordination of sensory input and motor activity, as well as the regulation of higher function. For example, for the appreciation and integration of visual information, the primary visual sensory area of the occipital cortex is linked to the visual association areas. These visual centers are connected by intrahemispheric fibers to the ipsilateral parietal cortex, as well as to other areas, such as the temporal lobe, for further integrated activity. The right and left parietal and posterior temporal areas, in turn, are connected by the corpus callosum.

Prefrontal Cortex. The prefrontal cortex, (which includes the three frontal gyri, the orbital gyri, most of the medial frontal gyrus, and approximately half of the cingulate gyrus) is concerned with higher mental functions, and is involved with many behavioral aspects of man. This area receives numerous connections from the temporal and parietal lobes via pathways in the cingulum, a bundle of long association fibers lying within the cingulate gyrus. Bilateral lesions of the pre- frontal area produce a loss of concentration, a decreased intellectual ability, and memory and judgment deficits. Motor and Sensory Cortices. The somatosensory cortex, which occupies contiguous parts of the frontal and parietal lobes, and the premotor cortex of the frontal lobe are concerned with the initiation, activation and performance of motor activity, and the reception of primary sensation of the body. Lesions of the somatosensory cortex result in contralateral paralysis and loss of somatosensory reception or perception.

Parietal Lobe. The parietal lobe is primarily concerned with the interpretation and integration of information from sensory areas, that is, the visual areas and the somatosensory cortex. Lesions in the parietal lobe result in sensory ataxia, a loss of general awareness, defective recognition of sensory impulses, and a lack of interpretation of spatial relationships.

Occipital Lobe. Lesions of the striate cortex (the primary visual area) on one side result in a contralateral hemianopsia, while lesions of the secondary regions of the visual cortex cause a lack of ability to interpret visual impulses.

Temporal Lobe. The posterior part of the temporal lobe is concerned with the reception and interpretation of auditory information, and with some aspects of pattern recognition and higher visual coordination; the interconnections of the auditory and visual segments of the occipital, temporal, and parietal lobes make this a highly integrated function. The anterior part of the temporal lobe is concerned with visceral motor activity and certain aspects of behavior. Lesions here may be manifested by psychomotor seizures or, if they occur in the region of the uncus, by uncinate “fits” characterized by alteration of consciousness and hallucinations of taste and odor.

Lesions. In general, lesions of primary receptive areas produce identifiable deficits. A lesion in a specific area of the cerebral cortex may produce a deficit far beyond the functional identity of that particular area because the complex interconnections beneath that cortical region may be damaged.