Developmental dyslexia, or developmental reading disorder, is defined as a significant impairment in the development of reading and related skills, such as spelling, writing, and reading comprehension, due to problems with phonologic processing despite adequate intelligence and conventional instruction. This disorder frequently occurs in association with other specific learning disabilities, such as disturbances in auditory comprehension, expressive language, articulation, and visual discrimination. It is the most commonly identified learning disorder, now felt to affect the sexes equally and is often present in siblings and other family members.

Because the primary deficit in developmental dyslexia is in reading and writing, the abnormality is usually not identified until the first few years of grade school, the time when children begin to read. Most parents are not aware of any disorder in their child before this stage. Because it is common and affects skills recently acquired by man, developmental dyslexia may have had certain advantages in preliterate societies, because dyslexic persons often have enhanced visual-spatial and artistic skills. 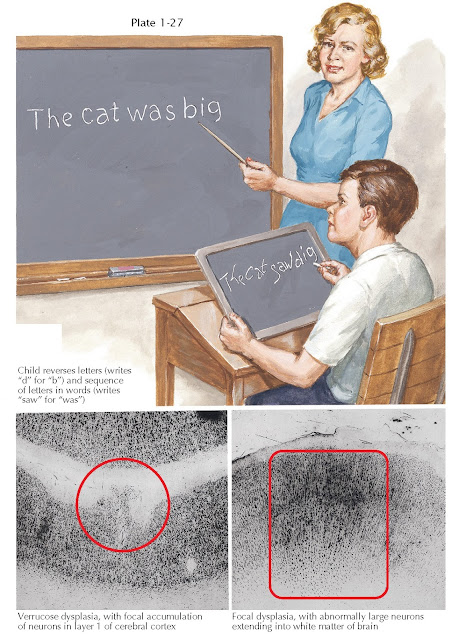 Etiologic Theories. Early investigators postulated that developmental dyslexia was caused by a lesion in the left angular gyrus, an area of the brain in which a lesion in adults produces word blindness. Later, Orton (1925) felt that the disorder was caused by equipotential visual association areas in the two cerebral hemispheres actively competing with each other, with one side seeing a mirror image of the other. Orton was particularly impressed with reversals of letters and letter sequences in words, the inconsistency of these errors, and the ability of some dyslexic students to read better with the aid of a mirror. Emotional problems and improper instruction were also thought to cause dyslexia.

Analysis of human malformations and animal models indicates that the focal and verrucose dysplasia probably arise during the later stages of neuronal migration to the cerebral cortex, and appear to result from the migration of neurons into focal areas of cortical destruction. In man, neuronal migration to the cerebral cortex occurs from the 8th to approximately the 16th week of gestation. Consistent with this timing is the presence of ectopic neurons in the white matter in two of the three brains examined. The nature of this postulated destructive process is unknown. Geschwind and Behan (1982) have noted a significant clustering of dyslexia, left-handedness, autoimmune disease, and migraine in persons related to each other, indicating an association between these disorders.

Currently, it is felt that developmental dyslexia is a disorder of network connections as demonstrated by Vandermosten (2012). By using MRI tractography, adults with dyslexia were noted to have a reduction in the left arcuate fasciculus, which connects the posterior temporal and frontal areas. This may represent an area of decreased myelination.

Treatment. Early identification and evaluation of dyslexia is essential for proper treatment. The optimal educational approach is multisensory, including phonemic awareness and enhanced phonologic processing, where virtually all respond. However, given that dyslexia is a lifelong disorder, many continue to struggle into adulthood when presented with new or less familiar words or in reading comprehension settings. Treatment should be aimed at enabling those to overcome deficits where possible and to learn strategies to circumvent and compensate for difficulties that cannot be overcome.