Teratomas (Greek: monstrous tumor) are encapsulated tumors with tissue or organ components resembling normal derivatives of all three germ layers but foreign to the location in which they are found. Teratomas have been reported to contain hair, teeth, bone, and very rarely more complex organs such as eye, torso, and hands and feet. Teratomas comprise about 5% of testicular tumors and are generally classiﬁed as malignant. They occur in several forms, including mature and immature teratomas and dermoid cysts, the latter of which contains developmentally mature skin (ectoderm) and are considered benign.

Teratomas show a remarkably wide variation in gross and microscopic appearance. Epithelial components of the tumors tend to reproduce glandular tissue, cysts, cartilage, joints, skin, teeth, neuroepithelium, epidermoid cysts, enteric glands, smooth muscle, salivary glands, respiratory epithelium, lymphoid tissue, transitional epithelium, and even cardiac muscle and bone. Teratomas may be so poorly differentiated that only unrecognizable structures are present. Pure teratomas do not increase fetoprotein or human chorionic gonadotropin (hCG) levels. The prognosis for teratoma, if it contains no malignant focus of leukemia, sarcoma, or carcinoma, is favorable because of the infrequent occurrence of metastases. In the testis, teratomas are most commonly found in association with other nonseminomatous germ cell tumor types and are malignant. When found in association with embryonal carcinoma or choriocarcinoma, they are called terato- carcinomas. Pure teratomas are relatively chemo- and radioresistant and are treated by radical orchiectomy and surgical extirpation in general. 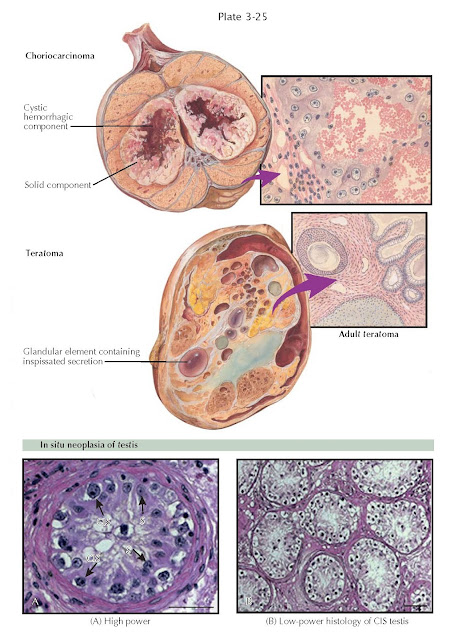 Choriocarcinomas are among the most highly malignant tumors in the body. This fast-growing tumor develops from trophoblastic cells that form the placenta and help embryos attach to the uterus. They are rare (2% of testis tumors) and most commonly observed in conjunction with embryonal carcinomas and teratocarcinomas. They uniformly secrete hCG into the serum. Grossly, they appear remarkably hemorrhagic and necrotic. Histologically, they consist of giant syncytiotrophoblastic cells with large, atypical nuclei intermingled with cytotrophoblasts, surrounding blood spaces, similar in structure to placental chorionic villi. Aggressive treatment with surgical resection and cisplatin based chemotherapy has resulted in high cure rates.

Testicular germ cell cancers may begin in a noninvasive form called carcinoma in situ (CIS) or intratubular germ cell neoplasia. CIS may not always progress to invasive cancer and it is estimated that it takes 5 years for CIS to progress to an invasive form of germ cell cancer. It is found in the contralateral testis in 5% of testis cancer cases. In addition, it is currently thought that CIS is the common precursor to all testis germ cell tumor types (except for juvenile yolk sac and teratoma tumors and spermatocytic seminomas). The assumption that CIS is the precursor of germ cell tumors is supported by the frequent observation of CIS in testis tissue surrounding invasive cancer and the development of invasive germ cell cancers in patients in whom CIS has been diagnosed. CIS causes no symptoms and has few ﬁndings, as it is generally found on testis biopsy. CIS cells are large with distinct nucleoli and are located in a single row at the usually thickened basement membrane of seminiferous tubules. Testicular tissue with CIS is frequently atrophic and may be dysgenetic, with poorly differentiated tubules, poor spermatogenesis, and microcalciﬁcations. The most common marker for CIS is placental alkaline phosphatase (PLAP), a tissue speciﬁc alkaline phosphatase. The best treatment for CIS is controversial, since CIS does not always become invasive cancer. However, if treatment is chosen, localized low-dose radiotherapy (14 to 16 Gy) to the testis eradicates CIS and germ cells (and therefore fertility) while maintaining Le dig cell function and androgen balance in most men.