Testicular cancer is the most common cancer in men 15 to 35 years old. It most commonly affects Caucasian men and is rare among men of African descent. World-wide incidence has doubled over the past 40 years, with the highest prevalence rates in Scandinavia, Germany, and New Zealand. A major risk factor for its development is cryptorchidism (undescended testicle). Other risk factors include infertility and a family history of testis cancer and possibly intersex conditions, inguinal hernia, mumps orchitis, sedentary lifestyle, and environmental exposures. They most commonly present as lumps in or hardening of the testis or as an enlargement within the scrotum due to a mass or hydrocele. They are generally painless but can be associated with increased testicular sensitivity. 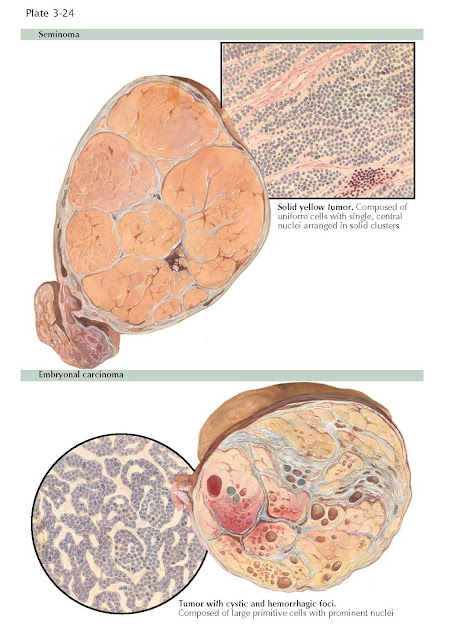 Although testis cancer can be derived from any cell type found in the testicles, more than 95% of testis cancers are germ cell tumors. Most of the remaining 5% are sex cord–gonadal stromal tumors derived from Leydig cells or Sertoli cells. Other tumors such as lipomas, ﬁbromas, adenomatoids, and sarcomas are rare. Secondary tumors from metastatic cancer, lym- phoma, or leukemia are also rare. Adult germ cell tumors are grouped into ﬁve general types, according to fundamental histologic and biologic behavior patterns. Seminomas comprise 40% of germ cell tumors. They are classiﬁed as typical (90%) or spermatocytic (10%) and are homogeneous, lobulated, yellow, orange, or pinkish tumors that are well circumscribed but not encapsulated. Histology reveals large, round or polygonal, uniform cells with clear cytoplasm, distinct cell membranes, and septated architecture. Tumor cells contain a prominent, centrally placed nucleus usually occupying about half of the cellular volume and may be arranged in disordered masses resembling tubules without lumen, similar to ovarian dysgerminomas (see Plate 10-22). The stroma may contain plasma cells and lymphocytes. Eighty percent of tumors occurring in undescended testes are seminomas. They are likely to be derived from spermatogonial stem cells within the testis. Seminomas have little tendency to invade the spermatic cord; they metastasize mainly through lymphatics to retroperitoneal lymph nodes. In 10% of cases, serum hCG levels are elevated. They are very radio-and chemosensitive. When small (1 cm) and solitary, they may be amenable to enucleation and partial orchiectomy; however, radical orchiectomy is needed for most tumors because of their size or number. When treated early, active surveillance or adjuvant treatment with retroperitoneal radiation or two cycles of cisplatin- based chemotherapy is usually recommended, with extremely high cure rates.

Embryonal carcinomas are the most common type of nonseminomatous germ cell tumor, accounting for about 20% of testis malignancies. These tumors resemble the tissues of early embryos and are likely to be derived from a multipotent primordial stem cell. This type of tumor can grow rapidly and metastasize. Grossly, they have the appearance of soft tissue, with areas of hemorrhage and necrosis. Histologically, embryonal carcinomas are composed of large masses of pleomorphic, embryonic epithelial cells that may simulate glandular structures with papillary organization or trabecular cells. These tumors stain with keratin, OCT-4 and CD30, are associated with an abnormal isochromosome 12 karyotype, and may be associated with elevated serum lactate dehydrogenase and placental alkaline phosphatase levels. Cells may be arranged into lobules or into papillary, cystic, and other patterns of either differentiated or poorly differentiated structures, including cytotrophoblast and syncytiotrophoblast. Treatment is by radical orchiectomy and with either cisplatin-based chemotherapy or retroperitoneal lymph node dissection for early-stage disease. Cure rates higher than 90% are possible in most cases.

Endodermal sinus tumors (yolk sac tumors) are unusual, very aggressive, malignant testis cancers. These tumors recapitulate embryonal yolk sac tissue and uniformly secrete-fetoprotein that is measurable in serum. In pure form, they are most commonly found in young boys; in adults, they usually occur as a component of mixed germ cell tumors. Grossly, the cut surface is heterogeneous because of extensive hemorrhage, necrosis, and cystic degeneration. Histologically, they are characterized by a pleomorphic intermingling of epithelial and mesenchymal elements (Schiller–Duval bodies) in an attempt to form yolk sac tissue. Treatment is radical orchiectomy and cisplatin-based chemotherapy.