Klinefelter syndrome is the most common genetic cause of sterility due to primary gonadal failure; it is also a relatively common genetic anomaly in the general population, occurring in 1:500 boys. It is characterized by a male phenotype with a 47,XXY chromosomal constitution. Approximately 10% of Klinefelter patients have mosaic 46,XY/47,XXY (or variants) patterns and the remainder have a pure 47,XXY or variant constitution. Clinically, it is associated with a triad of ﬁndings: small, ﬁrm testes, azoospermia (no sperm count) and gynecomastia, although the latter is not necessarily a typical feature.

Approximately half of Klinefelter cases are paternally derived, and recent evidence suggests that its occurrence may correlate with advanced paternal age. This syndrome may also present with increased height, decreased intelligence, varicosities, obesity, diabetes, leukemia, and increased likelihood of extragonadal germ cell tumors and breast cancer (20-fold higher than normal males). It usually presents as either delayed male puberty due to hypogonadism or with primary infertility later in life. Although nearly always associated with infertility in the pure chromosomal pattern, Klinefelter patients often show a wide spectrum of masculinization ranging from a severe eunuchoid habitus to a normal male phenotype. The degree of gynecomastia is variable. Indeed, approximately 10% of Klinefelter patients exhibit the classic attributes of this condition. 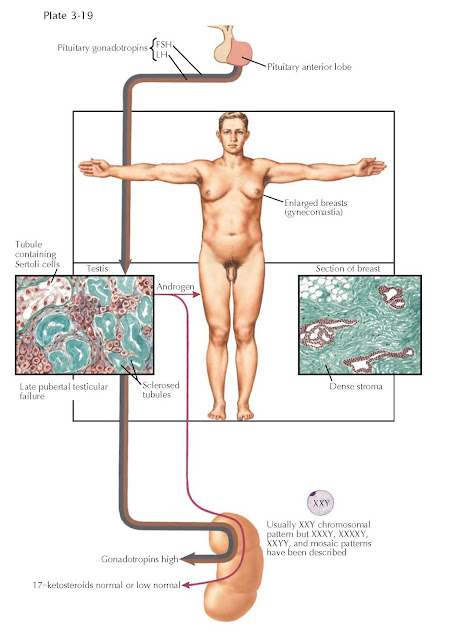 Reproductive hormones usually demonstrate a low testosterone and frankly elevated luteinizing hormone (LH) and follicle-stimulating hormone (FSH). Natural paternity with this syndrome is possible, but almost exclusively with the mosaic or milder form of the disease. Biologic paternity in cases of pure XXY males is now possible with assisted reproduction in conjunction with retrieval of testis sperm.

Characteristically, the testes exhibit an irregular distribution of seminiferous tubules and tubular sclerosis separated by connective tissue and clumps of Leydig cells. Leydig cells are often increased in number and size and can form nests that appear as adenomas. Among seminiferous tubules, most contain only Sertoli cells, whereas in 60% of cases, other tubules will harbor pockets of spermatogenesis with sperm. The seminiferous tubule basement membrane is thickened and sclerosed, and there is signiﬁcant intertubular hyalinization. Testicular abnormalities similar to those in Klinefelter syndrome can be brought about by radiation damage, mumps orchitis, or other testicular injury. Such a history is not typically elicited from Klinefelter patients, however. Prior to adolescence, the testes are relatively normal in size but fail to develop normally in response to pubertal gonadotropin stimulation.

Interestingly, despite a uniformly abnormal somatic genotype, 75% to 100% of mature sperm from 47,XXY patients harbor a normal haploid sex chromosome complement (X or Y), instead of XY or YY complements. The lack of signiﬁcant gonosomal aneuploidy in the presence of somatic aneuploidy suggests that abnormal germ cell lines may arrest at a meiotic checkpoint within the testis or that somatic-germ line mosaicism is more common than previously thought.