Puberty in the male occurs in progressive stages, most commonly identiﬁed by the classiﬁcation into ﬁve stages by Tanner (see Plate 1-6). In addition to rapid development of sexual organs and other characteristics, during the later Tanner stages, the testes produce sperm capable of fertility. Adolescence is the period of further development following puberty that ends when full maturity is reached. Prior to the onset of puberty (i.e., the prepubertal period), the testes are immature and quiescent as pituitary gonadotropins are released in only subthreshold amounts. As such, it is not possible to evaluate hypogonadism in prepubertal boys. It is also true that variations in male genitalia or stature during this period may not be due to absent or defective testes but may be ascribed to other factors, including those related to heredity, pituitary, thyroid, adrenal, growth hormone, or nutritional issues.

The real physical changes associated with puberty occur in response to the secretion of luteinizing hormone (LH) from the anterior pituitary gland. LH stimulates Leydig cells within the testis interstitium to produce androgens from cholesterol precursors. The age of onset and the rate at which it proceeds exhibit wide variation, lending tremendous variation in the length and degree of pubertal development in boys of any particular age. 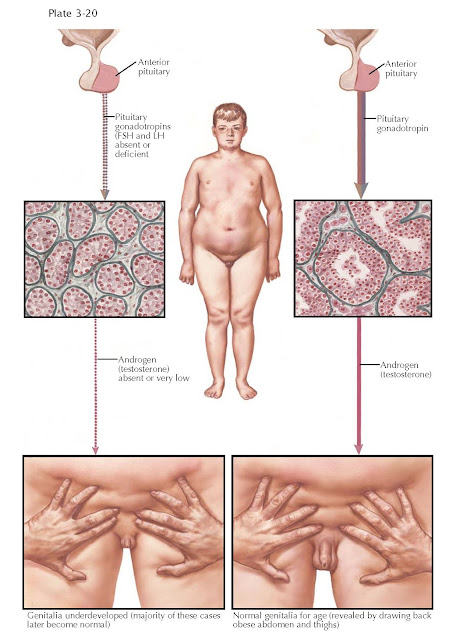 Care providers are often called upon by parents to prognosticate regarding the sexual development of peripubertal boys, especially if the average age for pubertal onset has passed without genital growth. However, it is difﬁcult to make an absolute diagnosis of hypogonadism during pubescence. A testicular biopsy is likely to reveal ﬁndings consistent with infantile testes, indicating only a lack of gonadotropic stimulation. Hormone assays for gonadotropins are more accurate but may change rapidly during this developmental period. The consistency of the testes, when soft and small, may possibly indicate true hypogonadism over time. Temporary breast development is normal during early male pubescence. Assessing linear growth or observing disproportionate bone growth can provide evidence of growth disorders such as dwarﬁsm.

If there is real concern about pubertal development, a diagnostic and therapeutic challenge with human chorionic gonadotropin (hCG, 500-700 IU three times weekly for 3 weeks) can evaluate potential gonadal and pituitary factors. An increase in testis consistency or serum testosterone implies that the testis Leydig cells are normal. This in turn suggests that there may only be a delay in the onset of puberty, although the existence of a permanent pituitary defect is still a possibility.

Obesity and delayed genital development frequently coexist, but obesity in the vast majority of the cases is based on nonendocrine causes (see Plate 3-18). Careful examination of most obese boys with alleged genital underdevelopment reveals no evidence of delayed puberty. A thorough examination of suspected micropenis that involves retraction of the pendulous abdomen and excessive mons pubic fat most commonly exposes a “hidden” penis and testes that are within the limits of normal for age.

The management of most boys with delayed puberty and persistently infantile genitalia remains watchful waiting. Although the onset of puberty may be delayed, full genital and linear growth usually ensues with time. Indeed, weight loss from diet management in cases of obesity may hasten the onset of puberty. Regular medical follow-up with anthropometric measurements can help with the early detection of true pubertal abnormalities resulting from hypogonadism or dwarfism. Treatment with gonadotropins or androgens may be considered when the lack of sexual development affects other quality-of-life issues such as school performance, athletic development, or concerns regarding socialization.