Infertility is deﬁned as the inability to conceive after 1 year of unprotected intercourse. It occurs in approximately 10% to 15% of reproductive-age couples worldwide. In 30% to 40% of cases, male factor infertility is involved. Among male factors, spermatogenic failure leading to oligospermia (low sperm count) or azoospermia (no sperm count) is very common. Unlike with clinical hypogonadism, there is usually no evidence of androgenic failure in most infertile men. Indeed, most infertile men are otherwise healthy and have no evidence of hypopituitarism or other endocrine or metabolic disturbances. However, the diagnosis of infertility may place men at higher risk of subsequently developing cancer, including testis and prostate cancer. In this way, infertility may be viewed as a marker of future health issues in affected men. The evaluation of male infertility involves a thorough history and physical examination, an assessment of testosterone and follicle-stimulating hormone (FSH) levels and, ideally, two semen analyses. Reproductive toxins such as tobacco, wet heat exposure (hot baths), ionizing radiation, heavy metal exposure, and antiandrogen medications should be eliminated and ideal body weight (body mass index [BMI] = 19 to 25) should be sought. The physical examination should investigate for testis cancer, varicoceles, and abnormalities of the excurrent ducts, such as con- genital absence of the vas deferens. Hormone assessment can evaluate the integrity of both the exocrine (sperm) and endocrine (androgen) hormonal axes critical for testis function. It is clear that normal sperm production requires normal levels of both FSH and testosterone. Two semen analyses are helpful for reducing the technical variability and better understanding the inherent biologic issues with semen quality. Adjunctive testing is possible but predicated mainly on the ﬁndings from this initial evaluation and the decision whether testing will (1) reveal a general health issue or (2) alter management of the fertility issue. In cases of severe spermatogenic failure, termed nonobstructive azoospermia, there may be microfoci of sperm production in the testis, despite the lack of any sperm in the ejaculate. This is even true in cases of iatrogenic spermatogenic failure due to chemotherapy for cancer treatment. Procedures such as the testis biopsy, ﬁne needle aspiration “mapping,” and microdissection testis sperm extraction are strategies used to determine whether sperm are present the testis of azoospermic men. If present, testis sperm is routinely used to achieve pregnancies with in vitro fertilization (IVF) and intracytoplasmic sperm injection (ICSI). The most common histologic patterns obtained from the diagnostic testis biopsy (see Plate 5-6) in nonobstructive azoospermic men are as follows:

Maturation arrest of spermatogenesis. This tubular morphology describes spermatogenesis that abruptly ceases during meiotic prophase such that germ cells beyond primary spermatocytes are absent (early maturation arrest). The arrest may also be incomplete (not in all tubules) or occur at other stages, most commonly at the spermatogonial stage or the spermatid stage (late arrest). Gonadotropins are usually normal. This condition can be transitory following febrile illnesses and testosterone deﬁciency, but in 50% of cases is a consequence of errors in meiotic recombination. 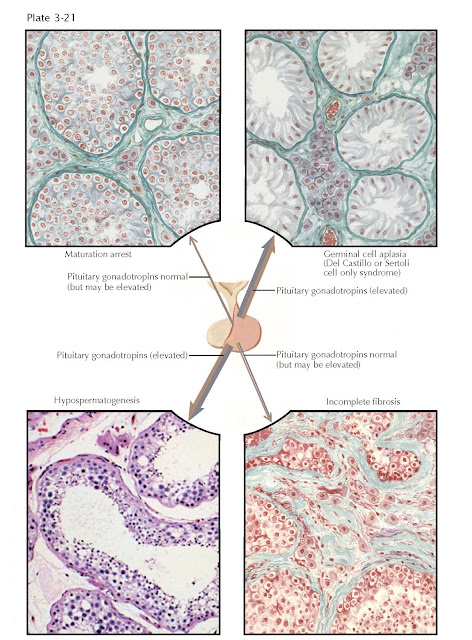 Germ cell aplasia (Sertoli cell–only syndrome). Often called “Del Castillo” syndrome, this histology is characterized by tubules devoid of germinal epithelium and containing only Sertoli cells. Normal Leydig cells appear to be increased in number. Causes may be acquired or congenital and in many cases may represent the failure of primordial germ cell migration to the somatic testis during early development (see Plate 1-2). FSH levels are usually high in this condition.

Hypospermatogenesis represents a thinning of the normal germinal epithelium such that mature sperm production declines to a point below the threshold required for ejaculation. Unlike maturation arrest, all stages of spermatogenesis are present in this condition. It is commonly observed after cancer chemotherapy, with varicocele, cryptorchidism, and tobacco use. FSH levels are generally elevated.

Tubular sclerosis consists of replacement of the seminiferous tubule lumen with acellular ﬁbrosis. Interstitial Leydig cells are present in normal or decreased numbers. It is a consequence of noxious agents, viral (mumps) and bacterial orchitis, vascular injury from torsion and may lead to progressive peritubular ﬁbrosis. In severe cases, FSH and LH levels are usually elevated.