INFECTION AND ABSCESS OF TESTIS AND EPIDIDYMIS

INFECTION AND ABSCESS OF TESTIS AND EPIDIDYMIS

Acute testicular infections are rare. More commonly, orchitis develops secondary to suppurative epididymitis and is termed epididymo-orchitis. Orchitis occurs through three possible routes: via lymphatics, via the blood-stream, and ascending through the vas deferens. The most common setting for bacterial orchitis in men older than 35 years is age-related prostatism or urethral strictures resulting in urinary tract obstruction and gram-negative urinary tract infections. In men younger than 35 years, sexually transmitted diseases such as chlamydia and nongonorrheal urethritis (NGU) are the most common culprits. Inﬂammatory orchitis may occur in response to bacterial toxins, autoimmune responses, trauma, torsion, chemicals such as iodine, thallium, lead and alcohol, and medications (amiodarone). In such cases, pathogenic organisms may not be cultured from the urine or from inﬂamed or necrotic tissue.

Acute bacterial orchitis is usually accompanied by high fevers and sudden scrotal pain and swelling. The onset is so acute that it may be confused with testicular torsion, except that the latter has no associated fever or bacteriuria. A reactive hydrocele is common, and the overlying scrotal skin shows redness and edema. These associated features often make it clinically difﬁcult to distinguish among isolated orchitis, epididymitis, or epididymo-orchitis. The inﬂamed testicle is tense and bluish in appearance, with many punctate hemorrhages on the surface. There may be considerable edema of the testis within the ﬁxed, noncompliant tunica albuginea, which can result in ischemia and seminiferous tubule loss and atrophy. The process may progress to suppuration, abscess formation, and in rare cases, testicular autoamputation. 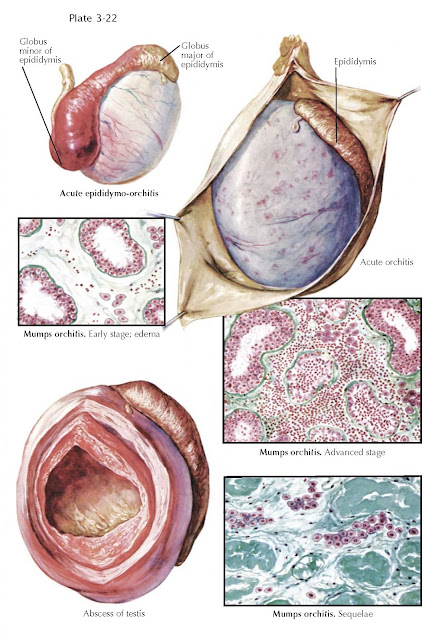 Mumps orchitis complicates approximately 20% of mumps cases and rarely occurs before puberty. As a viral glandular infection, mumps can affect the parotid glands, the pancreas, and the testis. Epididymis involvement in this process is rare. Orchitis usually develops 4 to 6 days after parotitis and generally subsides in 7 to 14 days. The signs and symptoms of this virus infection are similar to those of other interstitial orchitides. Scrotal pain and testicular swelling are the prominent features. Early testicular histologic ﬁndings include transitory edema that quickly progresses to marked interstitial inﬂammation. Seminiferous tubule sclerosis, gross testicular atrophy, and infertility are serious sequelae. About 70% of mumps orchitis cases are unilateral, and in 50% demonstrable testicular atrophy occurs. Treatments have included wide incision of the testis tunical albuginea and systematic corticosteroids or interferons to reduce the effects of inﬂammation and edema.

Epididymitis is by far the most common type of intrascrotal infection or inﬂammation. It may be classiﬁed as sexually transmitted (i.e., gonorrheal, chlamydial, NGU), bacterial (gram-negative, tuberculous), inﬂammatory, posttraumatic, and idiopathic. Infecting organisms reach the epididymis through the vas deferens from infected urine, prostate, or seminal vesicles. Infection may also spread retrograde through lymphatics and, rarely, through hematogenous routes.

Gonorrheal epididymitis, now rare, was historically a common complication of gonorrheal urethritis (see Plate 2-21). It rarely involves the testicle, appearing ﬁrst in the globus minor or cauda epididymis, which becomes swollen, tense, and tender. Although small abscesses may develop, suppuration is rare, and resolution is common, accompanied by sterility due to excurrent ductal obstruction from scar tissue if bilateral.

Posttraumatic epididymitis due to urethral catheterization, cystoscopy, and other surgical procedures is also relatively uncommon with widespread antibiotic use. Epididymitis may become chronic and be a source of recurrent pain and swelling due to ejaculatory duct reﬂux of urine through the vas deferens with strenuous physical activity or after organ congestion due to vasectomy. If epididymitis does not respond to rest, scrotal elevation, and antibiotics, antiinﬂammatories may be added. Antibiotic-refractory epididymitis should raise clinical suspicion for tuberculous epididymitis (see Plate 3-23) and warrants examination of ﬁrst morning urine or tissue for acid-fast bacillus. Epididymectomy is a rarely utilize treatment option but can be effective after vasectomy.