THE DEVELOPMENT OF MULTICELLULAR ORGANISMS

THE DEVELOPMENT OF MULTICELLULAR ORGANISMS

Many eukaryotes are unicellular organisms that, like bacteria, consist of only single cells capable of self-replication. The simplest eukaryotes are the yeasts, which contain only slightly more genes than many bacteria (Table acteria, they are much smaller and simpler than most cells of animals or plants. For example, the commonly studied yeast Saccharomyces cerevisiae is about 6 μm in diameter and contains 12 million base pairs of DNA (Figure 1.9). Other unicellular eukaryotes, however, are far more complex cells, with substantially larger and more complex genomes. They include organisms specialized to perform a variety of tasks, including photosynthesis, movement, and the capture and ingestion of other organisms as food. The ciliated protozoan Paramecium, for example, is a large, complex cell that can be up to 350 μm in length and is specialized for movement and feeding on bacteria and yeast (Figure 1.10). Surprisingly, the Paramecium genome contains almost twice as many genes as humans (see Table 1.2), illustrating the fact that neither genome size nor gene number is directly related to the complexity of an organism an unexpected result of genome sequencing projects that will be discussed further in Chapters 5 and 6. Other unicellular eukaryotes, such as the green alga Chlamydomonas (see Figure 1.10), contain chloroplasts and are able to carry out photosynthesis.

Figure 1.9 Scanning electron micrograph of Saccharomyces cerevisiae Yeasts are the simplest eukaryotes. Artificial color has been added to the micrograph. 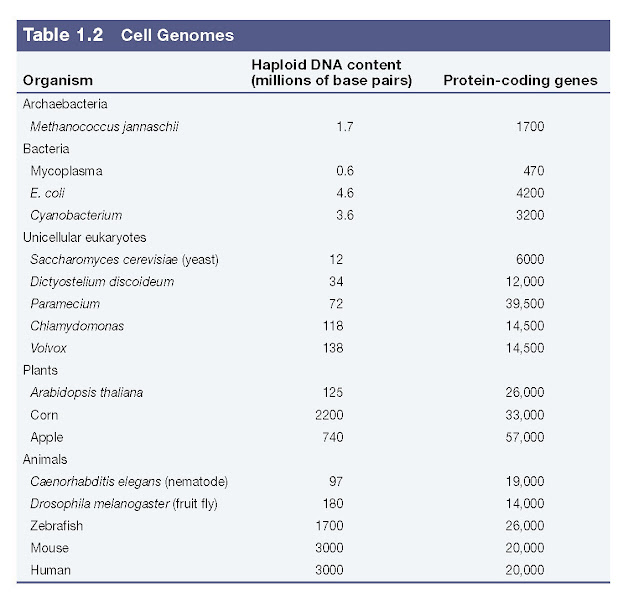 Increasing cell specialization and division of labor among the cells of simple multicellular organisms then led to the complexity and diversity observed in the many types of cells that make up present-day plants and animals, including human beings. Plants are composed of fewer cell types than are animals, but each different kind of plant cell is specialized to per- form specific tasks required by the organism as a whole (Figure 1.13). The cells of plants are organized into three main tissue systems: ground tissue, dermal tissue, and vascular tissue. The ground tissue contains parenchyma cells, which carry out most of the metabolic reactions of the plant, including photosynthesis. Ground tissue also contains two specialized cell types (collenchyma cells and sclerenchyma cells) that are characterized by thick cell walls and provide structural support to the plant. Dermal tissue covers the surface of the plant and is composed of epidermal cells, which form a protective coat and allow the absorption of nutrients. Finally, several types of elongated cells form the vascular system (the xylem and phloem), which is responsible for the transport of water and nutrients throughout the plant. The cells found in animals are considerably more diverse than those of plants. The human body, for example, is composed of more than 200 different kinds of cells, which are generally considered to be components of five main types of tissues: epithelial tissue, connective tissue, blood, nervous tissue, and muscle (Figure 1.14). Epithelial cells form sheets that cover the surface of the body and line the internal organs. There are many different types of epithelial cells, each specialized for a specific function, including protection (the skin), absorption (e.g., cells lining the small intestine), and secretion (e.g., cells of the salivary gland). Connective tissues include bone, cartilage, and adipose tissue, each of which is formed by different types of cells (osteoblasts, chondrocytes, and adipocytes, respectively). The loose connective tissue that underlies epithelial layers and fills the spaces between organs and tissues in the body is formed by another cell type, the fibroblast. Blood contains several different types of cells: red blood cells (erythrocytes) function in oxygen transport, and white blood cells (granulocytes, monocytes, macrophages, and lymphocytes) function in inflammatory reactions and the immune response. Nervous tissue is composed of supporting cells and nerve cells, or neurons, which are highly specialized to transmit signals throughout the body. Various types of sensory cells, such as cells of the eye and ear, are further specialized to receive external signals from the environment. Finally, several different types of muscle cells are responsible for the production of force and movement.

Figure 1.13 Representative plant cells (A) Collenchyma cells (from spinach leaf vein) are specialized for support and have thickened cell walls. (B) Epidermal cells on the surface of a dayflower leaf. Tiny pores (stomata) are flanked by specialized cells called guard cells. (C) Vessel elements and tracheids of a squash stem are elongated cells that are arranged end to end to form vessels of the xylem.

The evolution of animals clearly involved the development of considerable diversity and specialization at the cellular level. Understanding the mechanisms that control the growth and differentiation of such a complex array of specialized cells, starting from a single fertilized egg, is one of the major challenges facing contemporary cell and molecular biology.