The vertebral column is built from individual units of alternating bony vertebrae and fibrocartilaginous discs. These units are intimately connected by strong ligaments and supported by paraspinal muscles with tendinous  attachments  to  the  spine.  The individual bony elements and ligaments are described in Plates 1-9 to 1-18.

There are 33 vertebrae (7 cervical, 12 thoracic, 5 lumbar, 5 sacral, and 4 coccygeal), although the sacral and coccygeal vertebrae are usually fused to form the sacrum and coccyx. All vertebrae conform to a basic plan, but morphologic variations occur in the different regions. A typical vertebra is made up of an anterior, more-or-less cylindrical body and a posterior arch composed of two pedicles and two laminae, the latter united posteriorly in the midline to form a spinous process. These processes vary in shape, size, and direction in the various regions of the spine. On each side, the arch also supports a transverse process and superior and inferior articular processes; the latter form synovial joints that are the posterior sites of contact (left and right) for adjacent vertebral segments. The disc is the anterior site of attachment. The spinous and transverse processes provide levers for the many muscles attached to them. The increasing size of the vertebral bodies from above downward is related to the increasing weights and stresses borne by successive segments, and the sacral vertebrae are fused to form a solid wedge-shaped base—the keystone in a bridge whose arches curve down toward the hip joints. The intervertebral discs act as elastic buffers to absorb the many mechanical shocks sustained by the vertebral column. 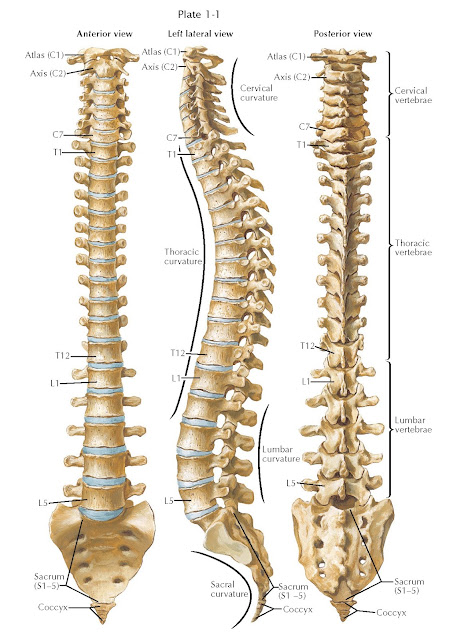 Only limited movements are possible between adjacent vertebrae, but the sum of these movements confers a considerable range of mobility on the vertebral column as a whole. Flexion, extension, lateral bending, rotation, and translation are all possible, and these actions are freer in the cervical and lumbar regions than in the thoracic region. Such differences exist because the discs are thicker in the cervical and lumbar areas and they lack the splinting effect produced by the thoracic rib cage and sternum. Additionally, the cervical and lumbar spinous processes are shorter and less closely apposed and the articular processes are shaped and arranged differently.

At birth, the vertebral column presents a general dorsal convexity, but, later, the cervical and lumbar regions become curved in the opposite directions when the infant reaches the stages of holding up the head (3 to 4 months) and sitting upright (6 to 9 months). The dorsal convexities are primary curves associated with the fetal uterine position, whereas the cervical and lumbar ventral secondary curves are compensatory to permit the assumption of the upright position. There may be additional slight lateral deviations resulting from unequal muscular traction in right-handed and left-handed persons.

The evolution of the human from a quadrupedal to a bipedal posture has been mainly attributed to the tilting of the sacrum between the hip bones, by an increase in lumbosacral angulation, and by minor adjustments of the anterior and posterior depths of various vertebrae and discs. An erect posture greatly increases the load on the lower spinal joints; however, as good as these ancestral adaptations were, some static and dynamic imperfections remain and predispose to the effects of gradual strain.

The length of the vertebral column averages 72 cm in the adult male and 7 to 10 cm less in the female. The vertebral canal extends through the entire length of the column and provides an excellent protection for the spinal cord, the exiting nerve roots, and the cauda equina. Vessels and nerve roots pass through intervertebral foramina between the superior and inferior borders of the pedicles of adjacent vertebrae, bound anteriorly by the corresponding vertebral body and intervertebral discs and posteriorly by the joints between the articular processes of adjoining vertebrae.