The craniocervical junction consists of the occiput and the first two cervical vertebrae (C1 and C2). It is the complex bony and ligamentous articulations  of  this region that facilitate its unique biomechanical properties, accounting for 25% of flexion and extension and 50% of rotation of the neck. The occiput is the skull’s most inferior bone, and it retains a cupped shape posteriorly that gives way to the triangular foramen magnum inferiorly. This foramen harbors the cervical spine cord as it ascends and transitions into the medulla and upper brainstem. At the anterolateral border of the foramen magnum are the occipital condyles, which are articulation points for the atlas (C1). These articulations are relatively flat so as to limit axial rotation of the atlantooccipital joint.

The atlas has two superior protuberances, known as its lateral masses, that articulate with the occipital condyles. The atlas is the only vertebral body to lack a spinous process, and in rare cases it may entirely lack a posterior arch. The atlas is a ring-shaped structure that lacks a vertebral body and does not make contact with an intervertebral disc. Embryologically, the body of the atlas becomes the dens (odontoid process) of the axis (C2). The dens articulates with the atlas anteriorly as it projects upward from the axis. The other points of articulation between the atlas and axis are the synovial joints of the articulating processes. The C1-2 joints are biconcave, as opposed to the flatter articulation of the occiput and C1. Whereas the occiput-C1 joint is designed mainly to flex and extend, the C1-2 joint is designed to provide axial rotation. 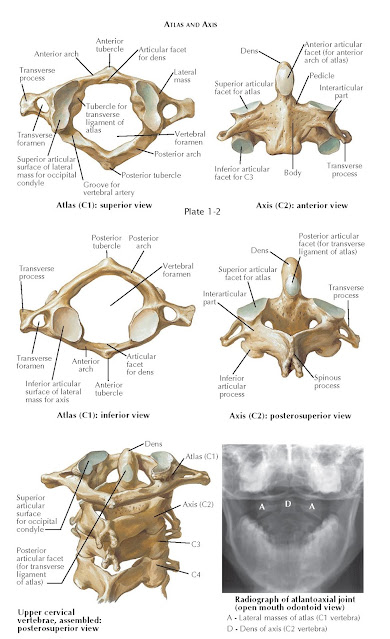 The ligamentous complex of the craniovertebral junction is a sophisticated network that plays a crucial role in maintaining the physical stability of the vertebra that protects the body’s most critical neurologic structures. Of the eight ligaments that support the craniovertebral junction, several have notable clinical relevance. The tectorial membrane is contiguous with the cranial dura mater and inserts onto the clivus. It originates as a superior continuation of the posterior longitudinal ligament and is thought to prevent anterior spinal cord compression by the clivus and possibly by the dens. The left and right alar ligaments function to limit axial rotation and connect the anterior and superior aspects of the dens to the occiput. The cruciate ligament is com- posed of vertical and horizontal components. The horizontal component is known as the transverse ligament, and it connects the two medial walls of the atlas, snugly securing the dens as it articulates with the anterior ring of the atlas. It acts to effectively limit the movement of C1 on C2 in the anteroposterior plane. The vertical components of the cruciate ligament consist of inferior and superior bands, but their function is not as well understood. 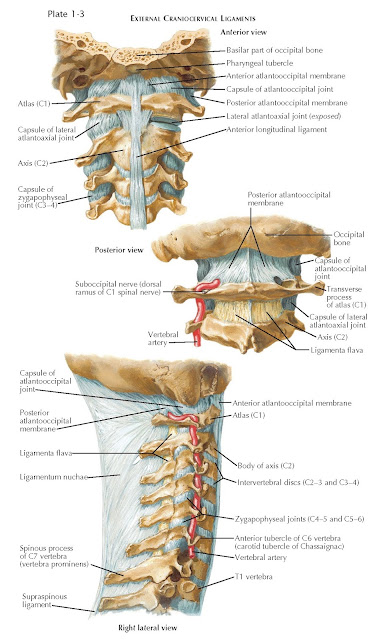 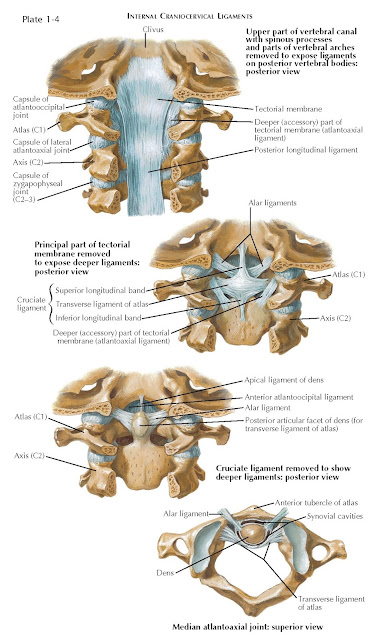 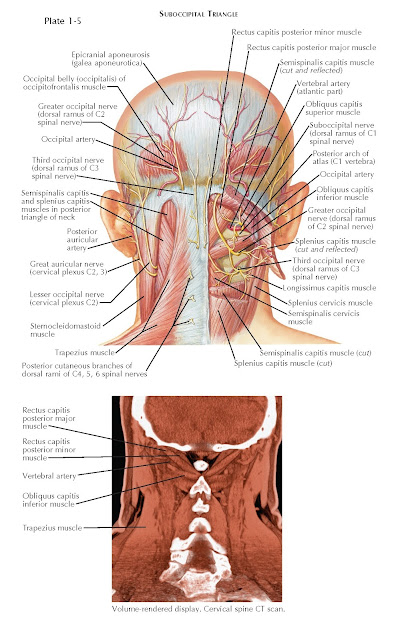 By far the most important of the vascular structures that traverse the craniovertebral junction are the vertebral arteries. The vertebral arteries typically enter the transverse foramina at C6. The path of the vertebral artery is relatively linear until it reaches C2, where the foramina are oriented obliquely when compared with the more horizontal orientation of the more caudal foramina. It continues through the more horizontally oriented transverse foramen of C1 and then arches anteromedially until it lies in the groove of the posterior arch of C1 known as the sulcus arteriosus. It then continues medially and pierces the atlantooccipital mem- brane. The venous drainage of the craniovertebral junction is via the jugular venous feeders and ultimately the subclavian vein. There is often a well-developed venous plexus at the C1-2 junction just lateral to the dura and around the C2 roots that surgeons must contend with when exposing the C1-2 region.