Among pathologic entities at the craniocervical junction, one of the most common is the dens fracture, which may constitute nearly 20% of all fractures of the cervical spine. It is the most common cervical fracture in the elderly patient. The mean age at onset of odontoid fractures is 47, with a bimodal distribution. Younger patients tend to present with dens fractures as a com- ponent of a constellation of severe injuries that result from a high-speed, high-energy injury. Elderly patients comprise the second, larger peak group of those affected. These fractures are typically the result of a low-speed trauma such as falls from the standing position. A high proportion of the dens volume is cancellous bone, and osteopenia and osteoporosis predispose older people to these types of fractures. The latter deserve special consideration in the elderly, in whom mortality rates have been reported as high as 40%.

Dens fractures are generally classified as types I, II, and III. Type I fractures involve just the tip of the dens and are the least common. Type II fractures involve the base of the odontoid process and do not extend into the C2 vertebral body. They are considered the most common and the least stable. Type III fractures extend into the body of C2. Differentiating the type of dens fracture is of significant clinical importance. Dens fractures in younger patients tend to be discovered during imaging after high-energy trauma such as motor vehicle accidents or falls and are most clearly evident on sagittal and coronal reconstructions of axial computed tomography (CT). In these patients it is important to rule out atlantooccipital dislocation, which is associated with type I dens fractures. A more common clinical scenario is an elderly patient presenting after a fall with upper cervical neck pain and reduced range of motion. On arrival, these patients often undergo CT of the head and neck, and the practitioner should scrutinize both coronal and sagittal reconstructions to evaluate for a dens fracture. If CT is unavailable or the patient presents in an ambulatory setting, three plain radiographs with anteroposterior, open-mouth odontoid, and cross-table lateral views should be obtained. 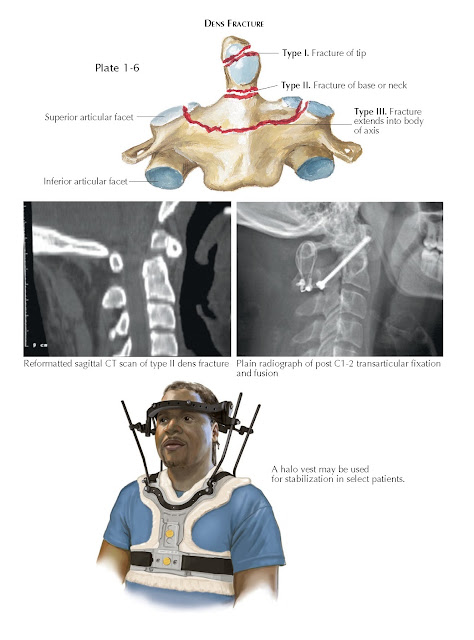 Isolated type I fractures that have occurred from low-energy injuries can generally be treated with application of a hard cervical collar and are associated with a high healing rate without surgical intervention. Type I fractures in younger patients or after high-impact injury should be evaluated with magnetic resonance imaging (MRI) to rule out atlantooccipital dislocation, because these fractures involve the alar ligament.

Type II fractures are considered unstable fractures and have a low healing rate, which is due to disruption of cancellous bone blood supply. The vascular supply to C2 runs from caudal to cranial, making the dens a watershed area, and this underscores the reason for the high nonunion rate observed in this fracture pattern. Historically, intervention of some sort has been advocated, whether it be surgical stabilization or nonsurgical immobilization (e.g., use of a halo-vest orthosis). The treatment of type II fractures has become an area of considerable clinical controversy. The benefit of surgical fixation is that it may greatly decrease the risk of nonunion, avoid cord compression that may occur as a sequelae of nonunion, and possibly obviate the need for immobilization with an orthosis. However, surgical intervention must be weighed against the patient’s comorbidities and the risks of surgical intervention. The alternative to surgery is a halo-vest orthosis, which immobilizes the cervical spine to promote fracture healing. A well-described danger of halo vest immobilization is a high mortality rate observed with its use in elderly patients. These patients are at high risk for falls, and use of this device confers an even more morbid scenario should they fall and re-injure themselves. This has caused many surgeons to avoid the use of these devices in elderly patients. An alternative treatment regimen is a period of rigid collar immobilization followed by flexion and extension radiographs. A pain-free, radiographically stable fibrous union is an acceptable outcome in an elderly patient with substantial comorbidities. In patients deemed to be acceptable surgical candidates, type II dens fractures can be treated anteriorly with an odontoid screw or posteriorly with wiring techniques, transarticular screws, or segmental screw fixation across C1-2. The type of surgical treatment is dependent on both fracture morphology and surgeon expertise.

Type III fractures extend into the cancellous, well-vascularized portion of the C2 body and portend a good prognosis. They tend to heal well with a cervical collar owing to the large contact area between the fracture surfaces.

This fracture type is often seen in patients presenting after a dive into a shallow pool or who have been launched upward in a motor vehicle accident, striking their head on the car’s roof. Patients are usually neurologically intact but may complain of neck pain. All patients should receive a CT scan on arrival in the emergency department after this type of trauma. Stable fractures generally have minimal displacement and can be treated in a brace. Unstable fractures are associated with greater displacement, and a halovest orthosis or surgical intervention may be required. 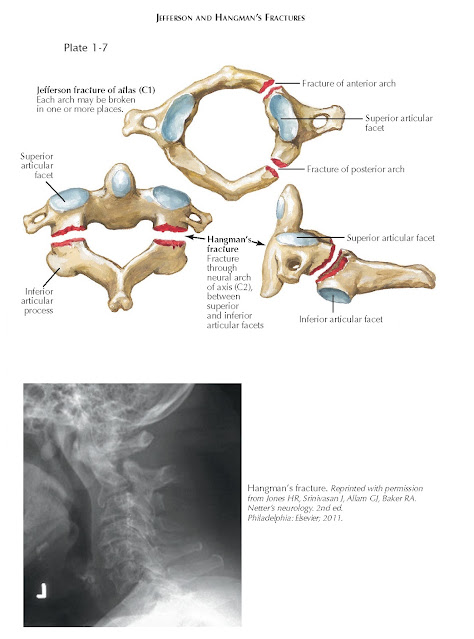 HANGMAN’S FRACTURE AND FRACTURES OF THE AXIS

Classic hangman’s fracture consists of bilateral fractures through the pars interarticularis of C2. Its namesake is a reference to the type of fractures once thought to contribute to the cause of death during judicial hangings. This type of fracture is now most commonly seen in motor vehicle accidents, where the head lurches forward past a restrained torso and then snaps abruptly backward when motion ceases. This hyperextension is likely the cause of the observed fracture pattern. Patients with this injury may complain of pain but most often are neurologically intact because this fracture effectively expands the spinal canal. The vast majority of these patients can be treated with halo immobilization, although highly displaced or angulated fractures may require operative treatment. The fracture is generally associated with good long-term outcome and recovery.

Sometimes morbidly referred to as “internal decapitation,” atlantooccipital dislocation is a rare clinical entity remarkable for its change in reporting over the past several years. It does not have a strict, universally accepted definition, but it generally indicates that there is instability at the craniocervical junction that allows for an inappropriate amount of displacement or mobility of the occiput relative to the atlas. Atlantooccipital dislocation is a result of extremely high-energy trauma. These patients frequently present with serious trauma to other organ systems, including the chest and abdomen, and are often clinically unstable. Owing to the severity of the associated injuries, atlantooccipital dislocation was once thought to be unsurvivable and usually found only at autopsy. With the advent of on-site intubation and maturation of support systems outside the hospital, atlantooccipital dislocation has become a much more recognized and treatable pathologic process. This is a highly unstable injury and requires prompt surgical treatment with instrumented occipital-cervical fusion.