The subaxial cervical spine consists of five cervical vertebrae. These vertebrae begin with C3 and end at C7. The overall balance of the cervical spine is slightly lordotic, which contributes to normal global sagittal alignment with the head appropriately aligned over the pelvis. This transition begins at the cervicothoracic junction, where the normal kyphosis of the thoracic spine gives way to the lordotic cervical spine. The cervical vertebrae have a common fundamental design but are unique from all other vertebral types owing to the presence of their transverse foramen and uncovertebral joints.

The subaxial cervical vertebral bodies are morphologically unique and smaller than those of the other movable vertebrae and increase in size caudally. The superior surfaces of the vertebral bodies are concave from side to side and slightly convex from front to back. The inferior surfaces are slightly curved. The lateral edges of the superior body are slightly raised, and the lower surfaces are beveled with small clefts. These clefts, which seem to articulate with the slightly raised lateral edges of the inferior vertebral body, are known as “uncovertebral joints,” although their actual function is unclear and they do not seem to be true joints. Surgically, they provide a marker for the lateral extent of decompression of the spinal cord and nerve roots during ventral surgery. 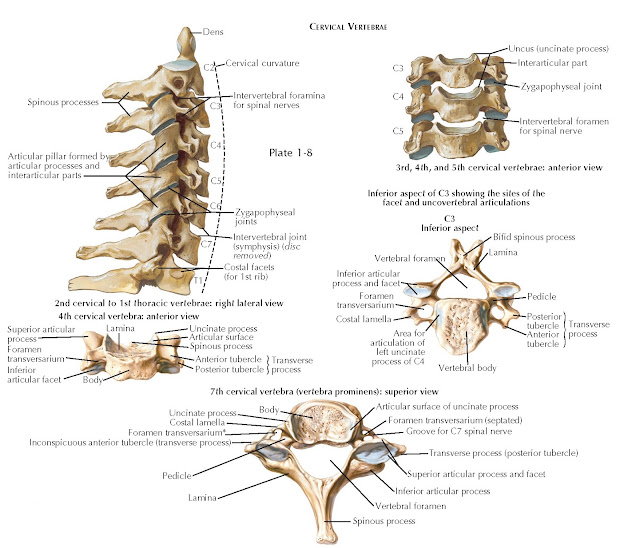 The spinal canal in the subaxial region is comparatively large to accommodate the cervical enlargement of the spinal cord; it is bound by the bodies, pedicles, and laminae of the vertebrae. The pedicles project posterolaterally from the bodies and are grooved by superior and inferior vertebral notches, almost equal in depth, which form the intervertebral foramina by connecting with similar notches on adjacent vertebrae. The medially directed laminae are thin and relatively long and fuse posteriorly to form short, bifid spinous processes (C3 to C6). Projecting laterally from the junction of the pedicles and laminae are articular pillars supporting superior and inferior articular facets.

Each transverse process is pierced by a foramen, through which the vertebral artery passes. Foramina are bound by narrow bony bars ending in anterior and posterior tubercles; these are interconnected lateral to the foramen by the so-called costotransverse bar. Only the medial part of the posterior bar represents the true transverse process; the anterior and costotransverse bars and the lateral portion of the posterior bar constitute the costal element. Abnormally, these elements, especially in C7 and C6, or both, develop to form cervical ribs. The upper surfaces of the costotransverse bars are grooved and lodge the anterior primary rami of the spinal nerves. The anterior tubercles of C6 are large and are termed the carotid tubercles, because the common carotid arteries lie just anteriorly and can be com- pressed against them. The dorsal facet joints formed from the inferior and superior articulating processes of adjacent vertebrae form the dorsum, or roof, of the neural foramina through which the spinal nerves exit the spinal column. Clinically, the foramen is very important because it is a common site of nerve root compression as people age. The surgically relevant borders of the foramen are the disc ventrally, the lateral dura medially, the inferior articular process dorsally, and the pedicle inferiorly.

The seventh cervical vertebra (C7) is called the vertebra prominens, because its spinous process is long and “proud” and ends in a tubercle that is easily palpable at the base of the neck. 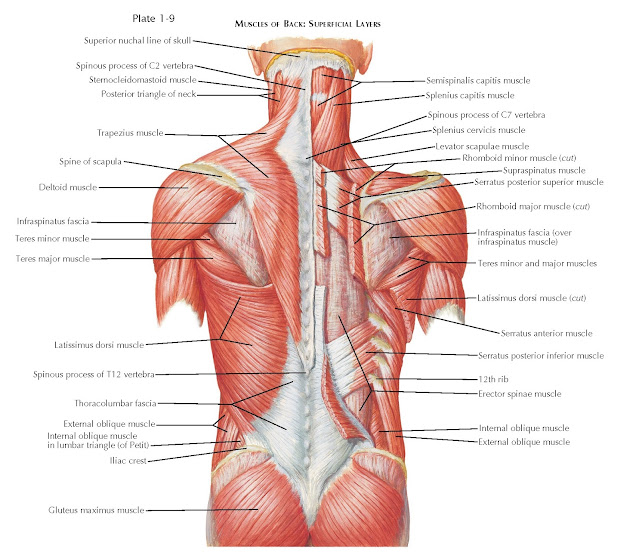 The splenius muscle serves as a strap, covering and holding in the deeper muscles of the back of the neck (see Plate 1-9). It takes origin from the ligamentum nuchae and the spinous processes of C7 to T6. The muscle may be divided into two parts the splenius capitis muscle, which inserts on the mastoid process and the lateral third of the superior nuchal line of the skull, and the splenius cervicis muscle, which terminates in the posterior tubercles of the first two or three cervical vertebrae. The cervicis portion is the outer and lower portion of the splenius muscle, and its inserting bundles curve deeply along its lateral margin.

The splenius muscle draws the head and neck backward and rotates the face toward the side of the muscle that is acting. Both sides contracting together extend the head and neck. The muscle is innervated by the lateral branches of the dorsal rami of the second to fifth or sixth cervical nerves. It lies directly under the trapezius and is covered by the nuchal fascia; its mastoid insertion is deep to that of the sternocleidomastoid, and it overlies the erector spinae and the semispinalis. The longissimus cervicis muscle arises medial to the upper end of the longissimus thoracis, from the transverse processes of about the upper four to six thoracic vertebrae. Its slips of insertion end in the transverse processes of C2 to C6. The longissimus capitis muscle connects the articular processes of the lower four cervical vertebrae with the posterior margin of the mastoid process.

The spinalis cervicis muscle is frequently absent or poorly developed. When completely represented, it arises from the ligamentum nuchae and from the spinous processes of C7 and, perhaps, the upper thoracic vertebrae. Its insertion may reach the spinous processes of the axis and sometimes extends to the C3 and C4 vertebrae. The spinalis capitis muscle is not a separate muscle but is blended laterally with the semi-spinalis capitis.

The ligamentum nuchae is a fibroelastic membrane stretching from the external occipital protuberance and crest to the posterior tubercle of the atlas and the spinous processes of all the other cervical vertebrae. It provides areas for muscular attachments and forms a midline septum between the posterior cervical muscles. Previously thought to be of minimal biomechanical significance, the ligamentum nuchae now seems to play a role in the preservation of range of motion in humans. The ligamenta flava contain a high proportion of yellow elastic fibers and connect the laminae of adjacent vertebrae. As in the remainder of the spine, the anterior longitudinal ligament and posterior longitudinal ligament border the anterior and posterior components of the spinal canal, respectively. 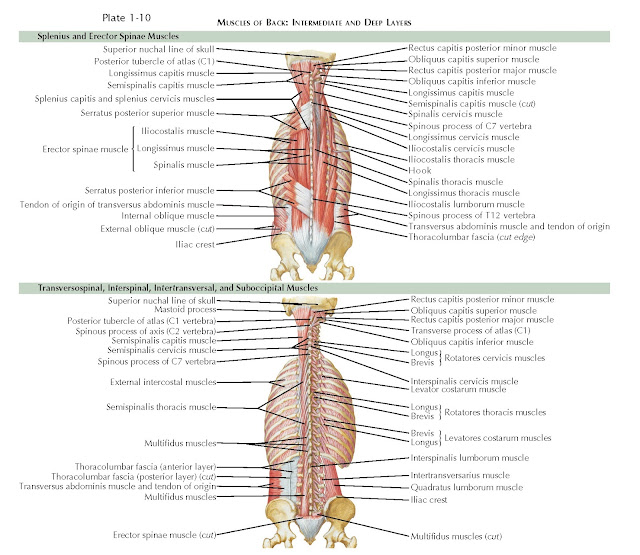 The cervical spinal nerves are similar in form and function to the nerves found in the other areas of the spine. A dorsal and ventral ramus combines to form the distal nerve, which then branches to provide sensory and motor function to its appropriate dermatome and myotome. What differs importantly is the numbering of spinal nerves. There are eight cervical nerves with only seven cervical vertebrae. This occurs because the first through seventh cervical nerves exist above the level of the corresponding vertebral body. As a result, the eighth cervical nerve exits below the C7 vertebra. 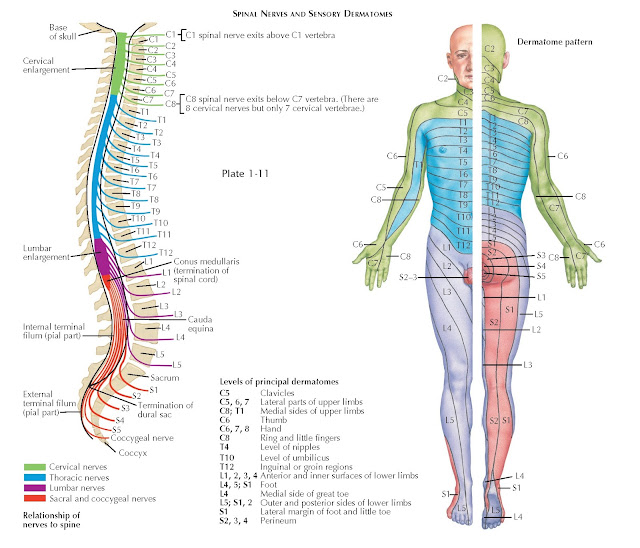 It is critical that surgeons understand the potential for anomalous positions of the vertebral artery. The artery will enter into the foramen transversarium at levels other that C6 in approximately 10% of people. This has implications for anterior surgical approaches to the cervical spine. The vertebral artery may also course through the lateral aspect of the vertebral body. This occurs in approximately 2.7% of people. It is critical that surgeons evaluate for these anomalies with a thorough preoperative review of advanced imaging (i.e., MRI or CT).