Assuming that observation and medical management of benign prostatic hyperplasia (BPH) are not appropriate or have failed (see Plate 4-9), surgical treatment is indicated. For patients with acute urinary retention, recurrent or persistent UTIs, recurrent gross hematuria, or bladder calculi, surgical management is also indicated for BPH. The presence of prostate cancer should be excluded. Two general approaches to prostatectomy are endoscopic or open (incisional). Among open procedures, suprapubic and retropubic prostatectomy are the most common. If the prostate gland is more than 75 g in weight or if suitable landmarks to guide endoscopic surgery at not visible, then open prostatectomy should be considered. 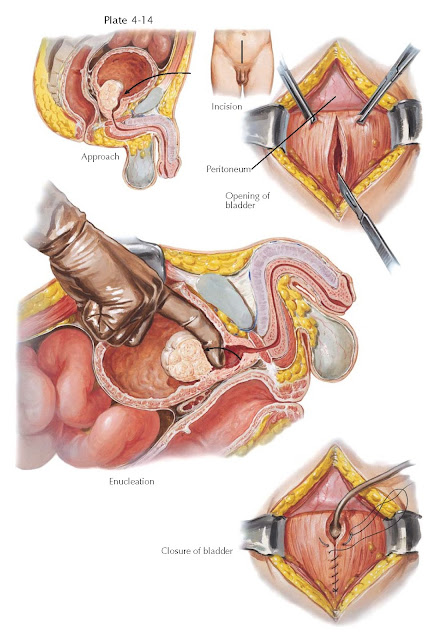 Suprapubic or transvesical prostatectomy, ﬁrst performed in 1894, requires few specialized instruments and involves enucleation of the prostatic adenoma through an extraperitoneal, lower abdominal incision. Compared with endoscopic approaches, open prostatectomy offers a lower retreatment rate, a more complete removal of the adenoma, and avoids the risk of dilutional hyponatremia with transurethral resection techniques. However, open prostatectomy involves a midline incision and a longer hospitalization and convalescence period. In addition, there is more potential for signiﬁcant postoperative hemorrhage.

The open suprapubic approach is particularly well suited to handle intravesical median lobe hypertrophy and lateral lobe enlargement that has grown to the point of projecting into the bladder. In addition, bladder pathology, including calculi, diverticula, tumors, or foreign bodies, can be treated simultaneously. Its chief disadvantages are that it is a relatively involved trans- abdominal and transvesical procedure that may not be applicable to debilitated patients.

In this approach, the skin is opened through either a lower midline or a transverse incision. The anterior rectus sheath is divided either vertically or transversely, and the rectus muscles are retracted laterally. This allows visualization of the anterior bladder wall within the space of Retzius, inferior to the peritoneal reﬂection and above the symphysis pubis. The bladder is opened with care to not expose any more of the prevesical or paravesical space than necessary. Using electrocautery, an incision is made in the bladder mucosa around the bladder neck. Using scissors or a foreﬁnger, the cleavage plane is developed between the hyperplastic adenoma and the compressed normal prostatic lying against the true capsule of the prostate. With lateral lobe hyperplasia, the ﬁnger is swept around the lateral aspect of each lobe, including the anterior and posterior commissures. The adenoma is brought into the bladder through the bladder neck with care, and the paired posterior prostatic arteries inspected for bleeding. If a simple median lobe is present, the mucosa of the bladder neck is incised on only its posterior surface, and the line of cleavage developed between the hyperplastic median lobe and the prostatic capsule. The operation is usually performed blindly, as illustrated.

Following removal of the adenoma from within the prostatic capsule, bleeding is usually controlled ﬁrst by packing the enucleated fossa with hemostatic gauze, and then by fulguration or ligation of the prostatic arteries near the bladder neck. Inﬂation of the Foley catheter balloon within the fossa can also tamponade bleeding.

Advancing the bladder mucosa into the prostatic fossa with absorbable suture at the 5- and 7-o’clock positions may also help with hemorrhage and possibly prevent subsequent bladder neck contracture. Pronounced hemorrhage despite these maneuvers is handled by placement of a purse-string suture of heavy nylon around the bladder neck, passed out through the skin and tied ﬁrmly, as described by Malamet. With excessive bleeding, a suprapubic catheter is also left in the bladder, along with a Foley catheter to allow for continuous bladder irrigation. A perivesical, pelvic drain may also be placed. The rectus muscles, fasciae, and skin are then reapproximated. The urethral catheter is removed after 2 to 4 days and a voiding trial administered by clamping the suprapubic tube. The postvoid residual urine is checked with the suprapubic tube over several days, and this tube is removed if voidin is adequate. Full activity is allowed after one month.