Sarcoma of the prostate is a rare cancer (0.1% of prostate malignancies), with most cases occurring in the ﬁrst decade of life. Patients present with symptoms of urinary obstruction or hematuria, and there can be associated bowel symptoms of constipation, inability to defecate, or bloody stools. Sources of mesodermal tissue giving rise to sarcoma are connective tissue, striated and smooth muscle, and lymphatic or vascular structures. Although many cases remain unclassiﬁed, for practical purposes prostatic sarcomas may be grouped into the following categories. 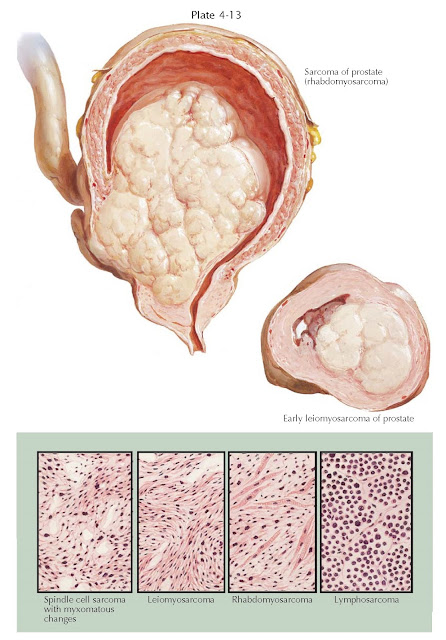 Myosarcomas arise from either smooth or striated muscle elements and comprise 50% to 60% of cases. Leiomyosarcomas are composed of interlacing bundles of malignant smooth muscle cells. Rhabdomyosarcomas generally present in childhood (mean age 5 years) and show cross and longitudinal striations within the cytoplasm of striated muscle cells. They may exhibit extreme pleomorphism in which spindle cells, round cells, and bizarre multinucleated giant cells intermix. These tumors typically grow to a large size, projecting into the bladder as a large nodular mass.

Malignant ﬁbrous histiocytoma (MFH) occurs in 10% to 15% of cases and is highly anaplastic, with marked pleomorphism. MFH is really more of a morphologic pattern rather than a distinct pathologic entity. It is a synonym for undifferentiated, pleomorphic sarcomas showing no speciﬁc line of differentiation. Tumors in this group include storiform, angiomatoid, myxoid, inﬂammatory, and giant cell sarcomas. A subset of pleomorphic MFH tumors includes sarcomas that are termed unclassiﬁed as they resemble one or more of the above histologic types.

Lymphosarcomas constitute 5% of prostatic sarcoma cases and originate from the sparse lymphatics within the prostate. They contain mature and immature lymphocytes that obscure the architecture and show a tendency to form lymphoid follicles. Lymphomatous involvement of the prostate may also occur as a meta- static manifestation of leukemia, Hodgkin disease, or lymphosarcoma originating elsewhere in the body.

Carcinosarcoma of the prostate is rare and generally occurs in men previously treated with androgen deprivation or radiation therapy for adenocarcinoma of the prostate. It is a tumor that contains mixed elements of adenocarcinoma and sarcoma and is very aggressive, with a 5-year survival of 50%. Fibrosarcomas, originating from ﬁbrous tissue and collagen, are most commonly found in soft tissue of the extremities and bone but can be found in the prostate. These include both spindle cell and round cell sarcomas, in which myxomatous degeneration may be present.

Sarcomas of the prostate can invade the bladder wall, seminal vesicles, and rectum, with obstruction to the bladder outlet and terminal ureters. Symptoms in the adult are similar to those associated with benign prostatic obstruction but progress within weeks or months to stranguria (straining to urinate). In the infant, symptoms may mimic those of congenital urethral valves or obstructive ureterocele. If urinary tract infection is superimposed on obstruction, the symptoms may be accompanied by dysuria, frequency, and hematuria. Regional spread to surrounding tissues is a constant feature, with metastases to neighboring lymph nodes, abdominal viscera, and bone occurring fairly early. Pain is not a characteristic early symptom but may be a salient feature after the tumor has grown in size. Unlike prostatic carcinoma, sarcomas do not cause an elevation of the serum acid phosphatase.

Sarcoma may be suspected on rectal examination, as the prostate is usually replaced by a rubbery mass that can be felt on rectal examination. The diagnosis is established by either transrectal ultrasound–guided prostate biopsy (see Plate 4-12) or by transurethral resection. The histologic type of prostate sarcoma has prognostic signiﬁcance, as pediatric patients with rhabdomyosarcoma do better than those with other histologies, with a median survival of more than 10 years. Tumor grade and tumor size are less relevant to outcome. The presence of metastatic disease at diagnosis is a uniformly poor prognostic marker.

The treatment of sarcoma of the prostate involves mainly surgical extirpation. In the rare instance of early detection in which the disease is still conﬁned to the adult prostate, a radical prostatectomy is indicated. In the infant, it is necessary to remove the prostate, seminal vesicles, and bladder with diversion of the urinary stream. Multimodality therapy involving chemotherapy and radiation therapy shows improved out-comes over surgery alone with most sarcomas.