A, axial view. B, sagittal view. Magnetic resonance imaging (MRI) uses short bursts (radiofrequency pulses) of electromagnetic waves that are sent into the magnet and are absorbed by protons in the tissues of the patient in the scanner. The pulses cause alignment of the protons as the result of raised energy levels; that is followed by a relaxation phase in which the protons return to a lower energy level. During the relaxation process, a detector records the emitted energy, and a computer provides a uniform image of the scanned tissue. The intervals (milliseconds) between the pulses (repetition time, TR) and the intervals between the collection times of the emitted energy (echo time, TE) provide various contrast information, which are indicated by contrast weighting. Short TR and TE intervals result in T1-weighted images, whereas longer TR and TE intervals result in T2-weighted images. The T1-weighted images are particularly useful for viewing normal brain structures and are particularly useful for viewing the brain stem and the cervical and thoracic spinal cord. The ventricular system and subarachnoid space in T1-weighted images appear dark. The T2-weighted images are particularly useful for revealing pathology, such as infarcts, tumors, edema, and demyelination. A contrast agent such as gadolinium can be used to delineate a tumor because of its ability to leak across the blood-brain barrier. 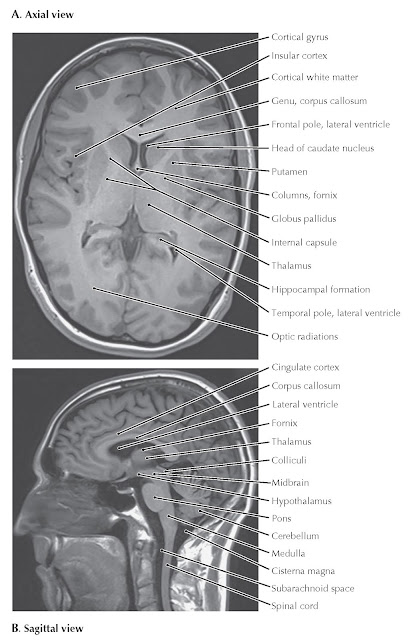