CARCINOMA OF PROSTATE I: EPIDEMIOLOGY, PROSTATESPECIFIC ANTIGEN, STAGING, AND GRADING

CARCINOMA OF PROSTATE I: EPIDEMIOLOGY, PROSTATESPECIFIC ANTIGEN, STAGING, AND GRADING

Prostate cancer is the second most common cancer after skin cancer in American men. The estimated life time risk of disease is 17% for Caucasians and 20% for African Americans. An important risk factor is age, as more than 70% of men diagnosed with prostate cancer are more than 65 years old. In addition, dramatic differences in the incidence of prostate cancer are seen in different ethnic groups and populations around the world, suggesting an environmental component. Genetic factors also appear to play a role, particularly among families in which the diagnosis is made in men less than 55 years old. Some evidence also suggests that dietary factors may increase or decrease the risk of prostate cancer. 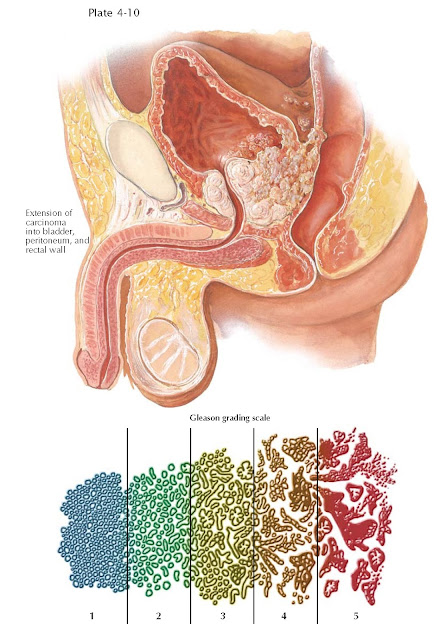 The triad of digital rectal examination (DRE), serum prostate-speciﬁc antigen (PSA), and transrectal ultrasound–directed prostate biopsies is used for the early detection of prostate cancer. DRE and serum PSA are the most useful ﬁrst-line tests. PSA is a member of the kallikrein family and is secreted in high concentrations into the seminal plasma. It is responsible for liquefaction of the seminal coagulum. It also “leaks” into the serum in low concentrations and circulates in both “bound,” or complexed, and “unbound,” or free, forms. Prostatic disease such as benign prostatic hyperplasia (BPH), prostatitis, and cancer can all affect serum PSA levels by disrupting normal glandular architecture, thus allowing PSA to gain access to the bloodstream. Prostatic manipulation through biopsy, massage, and transurethral resection can also elevate PSA levels. Therefore, elevated PSA levels are not speciﬁc for cancer. PSA levels are reduced by prostate-directed treatments that decrease the volume of prostatic epithelium through resection or hormonal manipulation with 5-alpha reductase inhibitors. PSA and DRE may not detect the same cancers, but PSA has higher predictive value.

One of the earliest strategies for improving the performance of PSA testing in the diagnosis of cancer was the use of a PSA threshold or cut point above which a prostate biopsy is recommended; however, an ideal threshold has not been established. Glandular volume based strategies such as the PSA density quotient (PSA level/prostate volume [mL]) are widely used but limited by wide variation in prostate size, shape, and epithelial conﬁguration. PSA velocity, or the rate of change of PSA with time (>0.75 ng/mL/year), seeks to capitalize on the fact that PSA levels rise faster with cancer than with BPH. However, at least three measurements over 18 months are necessary for this test. Finally, the free- to-complexed PSA ratio is used as men with cancer have a greater fraction of serum PSA that is complexed to protease inhibitors. In the future, PSA and other bio-markers, along with age, family history, and race, might more selectively identify men at highest risk of cancer. In general, prostate cancer does not initially cause symptoms. As the cancer grows, it inﬁltrates the prostatic capsule and can penetrate it, generally in areas where nerves perforate the gland. Such perineural invasion can happen early and may be the primary pathway for extraprostatic spread. Prostate cancer rarely perforates the rectal wall; however, the seminal vesicles are commonly involved. Urethral obstruction occurs late in the disease but ureteral obstruction can occur much earlier.

Most cancers originate in the posterior zone and are clinically staged as being organ-conﬁned (TNM system stages T1 and T2), palpable beyond the prostate (T3), or ﬁxed to or invading adjacent structures (T4), such as the bladder, bladder neck, external sphincter, rectum, or levator muscle. In stage T1c cases, the tumor is nonpalpable and identiﬁed on prostate needle biopsy because of PSA elevation. The ﬁgure illustrates an advanced case (TNM Stage T4) of extension into the bladder and peritoneum.

Histologically, prostate cancer is most commonly adenocarcinoma in which small acini grow in a disorganized pattern amid ﬁbrous stroma. Mucinous and small cell adenocarcinomas are less common, and sarcomas (see Plate 4-13) and transitional cell carcinoma are very unusual. Prostate cancer is most commonly graded according to the Gleason system, developed in 1974 and based on the glandular patterns identiﬁed on low power magniﬁcation (see ﬁgure). Cytologic features play no role in this grading system. Both the primary (predominant) and secondary (second most prevalent) architectural patterns are “scored” on a scale of 1 (most differentiated) to 5 (most anaplastic). Because both patterns are prognostic, a Gleason “sum” or addition of the two scores is also reported. Overall, this grading system has an excellent correlation with disease progression and prognosis.