In 10% of patients at presentation, prostatic carcinoma reveals contiguous spread to other organs (see Plate 4-10). However, with aggressive early detection strategies currently used, far fewer patients exhibit metastases to distant sites. When it occurs, prostate cancer has an overwhelming predilection to metastasize to bone. It is thought that this unique metastatic pattern is due to the fact that (1) circulating prostatic cancer cells may be found early on in the life span of the cancer and (2) metastatic cells tend to be arrested in cortical and medullary bone spaces. Tumor expansion in bone may cause pain, compression, pathologic fractures, and anemia due to bone marrow replacement. 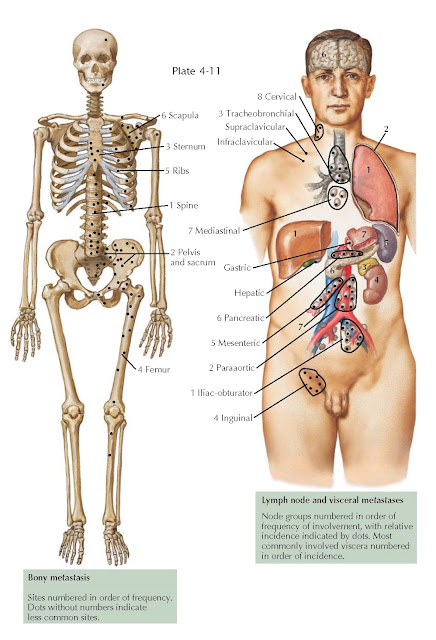 The pattern of bony metastases in prostate cancer also occurs in a fairly characteristic manner, with involvement of both the axial and appendicular skeletons, typically the pelvis, sacrum, and spine, observed most commonly. This metastatic distribution may be a consequence of pelvic venous drainage through Batson plexus, a network of valveless veins that connect the deep pelvic veins draining the inferior bladder, prostate, and rectum to the internal vertebral venous plexuses. Because of their location and valveless nature, they are thought to provide a route for the spread of cancer metastases from prostate and colorectal cancers. From this landing zone, cancer may then spread to the vertebral column or brain. The plexus is named after anatomist Oscar Vivian Batson, who ﬁrst described it in 1940. The sites of bone involvement are illustrated in the frequency with which they occur.

Prostate cancer involvement of visceral and soft tissue nodal sites is less common than bony metastases. In patients with hormone-refractory prostate cancer, bony involvement can be found in 85% of patients, soft tissue or nodal involvement in 25%, and visceral metastases (mainly to lung and liver) in 18%. Although not as characteristic as bony metastases, the approximate sites of visceral and soft tissue nodal involvement are also illustrated in the frequency with which they occur. Bony metastases from prostate cancer, when viewed on plain x-rays, appear osteoblastic. The metastasis has a “snowy” appearance because of an increased deposition of calcium. A more destructive osteoclastic process (osteolytic metastases) occurs in 2% of cases. The pathologic fracture rate from prostate cancer is relatively low compared to that of other metastatic cancers precisely because it induces bone-forming osteoblastic reactions. Even when fractures occur, they heal similarly to those of normal bone, limiting the need for surgical stabilization. Elevation of the serum acid phosphatase level is found in two-thirds of patients with metastases and is usually elevated when osteoblastic metastases are present.

The value of a nuclear bone scan to detect bony metastases is limited to patients with a Gleason sum score lower than 7 and a prostate-speciﬁc antigen level lower than 20 ng/mL. A bone scan is also indicated in patients with prostate cancer who have symptoms suggesting bony metastases, but bone scan activity may not be observed until 5 years after micrometastases have developed. Abdominal or pelvic computed tomographic (CT) or magnetic resonance imaging (MRI) scans may reveal extracapsular extension, seminal vesical involvement, pelvic lymph node enlargement, liver metastases, and hydronephrosis (due to ureteral obstruction) in patients suspected of having locally advanced disease. Immunoscintigraphy can also be used to reveal extraprostatic disease, but these scans frequently yield false-negative results; speciﬁcity is improved when combined with CT scans. Depending on the urgency and need for treatment, bony metastases from prostate cancer are treated with androgen deprivation therapy in naïve tumors and generally respond to radiation therapy. Exciting clinical trials with novel chemotherapy agents and prostate cancer vaccines are under way as the survival rate for hormone-refractory, metastatic prostate cancer is grim and projected at 8% to 10% at 5 years.