The articulation of the atlas (C1) and axis (C2) is the most mobile part of the vertebral column and consequently the least stable. The dens (odontoid process) of the axis acts as a bony buttress to prevent hyperextension of the neck, but the rest of the normal range of motion—and the protection of the spinal cord in the area—is maintained by the integrity of the surrounding ligaments and capsular structures. Atlantoaxial instability may result from occipitalization of the atlas, basilar impression, odontoid malformations, and laxity of the dens-retaining ligaments. It is often associated with Down syndrome (trisomy 21) and some of the skeletal dysplasias that cause dwarfism. The most significant risk is compression of the spinal cord. 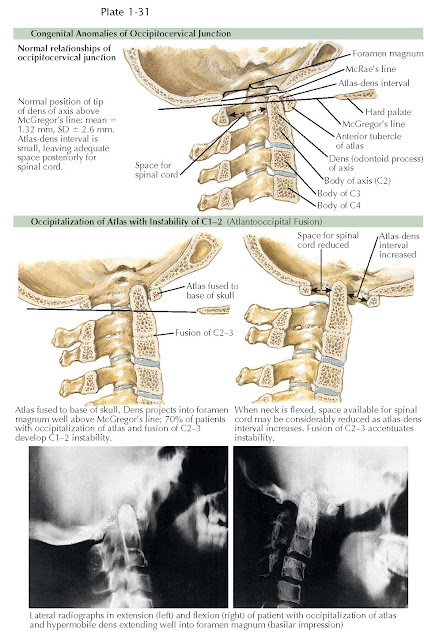 This condition is characterized by partial or complete fusion of the bony ring of the atlas to the base of the occiput (see Plate 1-31). The clinical signs—torticollis, short neck, a low posterior hairline, and restricted neck motions—are similar to those of Klippel-Feil syndrome (see Plate 1-33). One fifth of patients have associated congenital abnormalities, including jaw malformations, incomplete cleft of the nasal cartilage, cleft palate, external ear deformities, cervical ribs, hypospadias, and urinary tract anomalies.

Fusion of the atlantooccipital joint increases the strain on the C1-2 articulation and leads to instability in greater than 50% of patients, particularly when a C2-3 fusion is also present. The dens may gradually encroach anteriorly into the spinal cord or medulla, or the posterior ring of C1 may be pulled forward into the spinal cord. “Relative” basilar impression is seen in about 50% of patients. It is caused by diminished vertical height of the ring of the atlas, which brings the tip of the dens of the axis closer to the foramen magnum and the medulla oblongata. Neurologic symptoms develop if the dens projects into the opening of the foramen magnum.

Odontoid anomalies include agenesis, hypoplasia, and os odontoideum, in which the body of the dens is a free ossicle separated from the axis by a wide gap, suggesting a nonunion (see Plate 1-32). In normal children younger than age 2, the bony dens is “separated” from the body of the axis by a broad cartilaginous band that corresponds to a rudimentary intervertebral disc. Complete fusion of this vestigial structure typically occurs after age 5. Abnormalities of the dens are more commonly associated with bone dysplasias and Down and Klippel- Feil syndromes.

Minor trauma is commonly associated with the onset of symptoms, which may range from local irritation of the atlantoaxial articulation to neurologic impairment resulting from C1-2 instability, decreased space avail- able for the spinal cord, and spinal cord compression. The abnormality is often marked by the insidious onset of slowly progressive neurologic impairment of both posterior and anterior spinal cord structures. In children, presenting symptoms may be subtle and nonspecific, such as generalized weakness, frequent falling, or requests to be carried.

LAXITY OF TRANSVERSE LIGAMENT OF ATLAS

Laxity of the transverse ligament (see Plate 1-32) may be due to acute or repetitive trauma, or the attachment may be weakened by inflammation from infection or rheumatologic conditions. In Down syndrome, the laxity may be due to rupture or attenuation of the trans- verse ligament and may lead to severe C1-2 instability. Lateral flexion-extension radiographs are required in children with Down syndrome who have neurologic problems or plan to participate in sports (most typically, Special Olympics) that may cause stress or trauma to the head and neck. 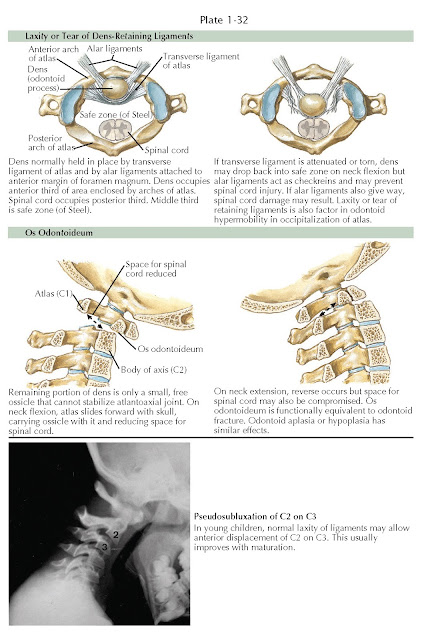 PSEUDOSUBLUXATION OF C2 ON C3

Cervical spine flexibility is greater in children than in adults. A common and normal finding in children is the anterior displacement of C2 on C3 when the neck is flexed (see Plate 1-32). This pseudosubluxation is due to the normal laxity of the intervertebral ligaments, and nearly 50% of children younger than 8 years of age have anteroposterior movement of 3 mm or more. The straight-line relationship of the posterior elements in flexion (the posterior cervical line eponymically known as Swischuk’s line) is helpful in differentiating physio- logic from pathologic anterior displacement of C2 on C3. The posterior cervical line drawn from the anterior aspect of the spinous process of C1 to the anterior aspect of the spinous process of C3 should pass no more than 2 mm anteriorly to the same point of C2. Also common in normal children is subtle overriding of the atlas on the dens with the neck in extension.

Clinical Manifestations. The clinical signs and symptoms of instability of the C1-2 junction are inconsistent. Only a few patients report a trauma or pain of the head or neck or exhibit torticollis, quadriparesis, or signs of high spinal cord compression.

The clinical signs of basilar impression or occipitalization of the atlas suggest that major neurologic damage is occurring as the dens encroaches on the spinal cord (see Plate 1-31). Muscle weakness and wasting, ataxia, spasticity, hyperreflexia, and pathologic reflexes—the signs of pyramidal tract irritation—are common. Posterior impingement from the rim of the foramen magnum or the posterior ring of the atlas is typical of odontoid anomalies; symptoms include alterations of sensation for deep pressure, vibration, and proprioception. Nystagmus, ataxia, and incoordination may be due to an associated cerebellar herniation, and signs and symptoms of vertebral artery compression—dizziness, seizures, mental deterioration, and syncope—may occur alone or in combination with symptoms of spinal cord compression.

The atlas-dens interval is of limited value in evaluating chronic atlantoaxial instability resulting from congenital anomalies of the occipitocervical junction, rheumatoid arthritis, and Down syndrome. In patients with these conditions, the dens is frequently hypermobile, resulting in an increased atlas-dens interval, and measurement of the amount of space available for the spinal cord is more valuable. This is accomplished by measuring the distance from the posterior aspect of the dens to the nearest posterior structure (foramen magnum or posterior ring of the atlas). This measurement is particularly helpful in evaluating a nonunion of the dens or os odontoideum, because in both conditions the atlas-dens interval may be normal but on neck flexion or extension the space available for the spinal cord may be considerably reduced. A reduction of the lumen of the vertebral canal to 13 m or less may be associated with neurologic problems.

Obtaining a satisfactory radiograph is often hampered by the patient’s limited ability to cooperate, by fixed bony deformity, and by overlapping shadows from the mandible, occiput, and foramen magnum. Directing the x-ray beam 90 degrees to the lateral of the skull usually produces a satisfactory view. Visualization may be enhanced with flexion-extension radiographs or CT, and motion studies are frequently necessary.

Treatment. Effective treatment of atlantoaxial instability can be provided only if the exact cause of the symptoms is determined. Before surgical intervention, reduction of the atlantoaxial articulation should be achieved either by positioning or by traction with the patient awake. Surgical reduction should be avoided, because it has been associated with increased morbidity and mortality.