The growth of the brain is matched by the flexible growth of the cranial bones, which must establish a mechanism to expand the skull vault coincident with increased brain volume. The cranial bones, mostly generated by neural crest–derived chondrogenic and osteogenic precursors, are arranged as “plates” with elastic joints between each plate referred to as cranial sutures. Craniosynostosis implies a premature closure of one or more cranial sutures (see Plate 1-10). Early fusion of bone plates results in a progressively dysmorphic cranial shape. True craniosynostosis occurs in one of every 2,000 infants, predominates in males, and manifests in nonsyndromic and syndromic forms. Normally, the metopic, or frontal, suture closes before birth; the posterior fontanelle, at the union of the lambdoid and sagittal sutures, by 3 months; and the anterior fontanelle at the junction of the coronal, sagittal, and metopic sutures, by 18 months. After a suture is fused, growth occurs parallel to that suture; that is, growth is inhibited at 90 degrees to the suture. The fusion itself is felt as a ridge. Cranial sutures cannot be separated by increased intracranial pressure after 12 years of age. 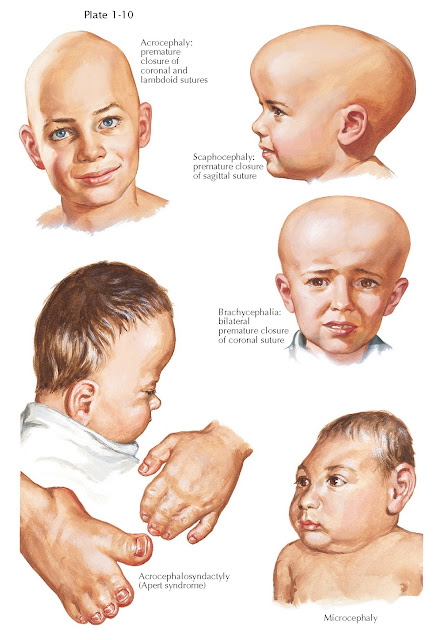 Nonsyndromic craniosynostosis occurs much more frequently than syndromic. The most common premature closure occurs in the sagittal suture, which leads to scaphocephaly, dolichocephaly, or elongated head. The next most common premature closure is found in the coronal suture, which may be either unilateral or bilateral. If unilateral, it causes a unilateral ridge, with a pulling up of the orbit, flattening of the frontal area, and prominence near the zygoma on the affected side, which produces a quizzical expression. If premature coronal closure is bilateral, brachycephalia, manifested by an abnormally broad skull, is the result. Metopic craniosynostosis causes trigonocephaly, with a pointed frontal bone, hypotelorism, and prominent temporal hollowing. True lambdoid synostosis, which can also be unilateral or bilateral, is exceedingly rare, with an incidence less than 1:100,000. Turricephaly, a towering cranial vault due to multiple suture closure, is quite rare and disfiguring. Some infants will have prominent ridges along sutures without the other typical cranial findings, and these ridges will spontaneously resolve with time.

Syndromic craniosynostosis usually is autosomal dominant. Crouzon disease, with closure of multiple sutures and the associated facial anomalies of hypertelorism, proptosis, and choanal atresia, is known as craniofacial dysostosis. Intelligence is normal, but premature suture closure can cause elevated intracranial pressure. In acrocephalosyndactyly, or Apert syndrome, the head is elongated, the result of premature closure of all sutures; the orbits are shallow, causing exophthalmos; and either syndactyly or polydactyly is present. Saethre-Chotzen, Pfeiffer, and Carpenter have also identified syndromes of acrocephalosyndactyly that include various combinations of synostosis, syndactyly, and other anomalies. Syndromic craniosynostosis can be associated with hydrocephalus.

Conditions that can be confused with craniosynostosis include microcephaly and deformational plagiocephaly. Microcephaly from lack of brain growth is not typically accompanied by a disfigured cranial shape. Deformational plagiocephaly is very common and currently occurs in approximately 1 in 10 infants. The baby tends to lie on one area of the skull, which causes flattening in the affected area, anterior displacement of the unilateral ear, and ipsilateral frontal and contralateral parietal bossing, with an overall parallelogram shape. Some infants have associated torticollis. Most infants will have spontaneous improvement with exercises; very severe cases made need treatment with a cranial orthosis.