EXTRACRANIAL HEMORRHAGE AND SKULL FRACTURES IN THE NEWBORN

EXTRACRANIAL HEMORRHAGE AND SKULL FRACTURES IN THE NEWBORN

Modern obstetric practice has decreased the incidence of trauma to the neonate that is clearly associated with primiparity, large infant size, difficult or breech delivery, and use of forceps.

Caput succedaneum, an edematous swelling that may be hemorrhagic, is seen in vaginal deliveries. It may transilluminate, is soft, pits, is usually at the vertex over suture lines, and resolves rapidly.

Subgaleal hemorrhage, which usually results from shearing forces tearing veins, occurs between the galea aponeurotica and the periosteum of the skull. It spreads widely, crosses suture lines, may dissect over the forehead and even into an orbit, and may take weeks to resolve. Neonates should be followed closely for symptomatic anemia.

Cephalohematoma is a subperiosteal hemorrhage associated with a linear skull fracture in about 5% of cases. It may result from the use of forceps, can also be related to mechanical factors in the pelvis and the shearing forces of active labor, and palpates like a depressed fracture. Rarely, these hematomas calcify instead of resorbing. Most calcified hematomas will spontaneously resolve as the skull grows and incorporates the area. 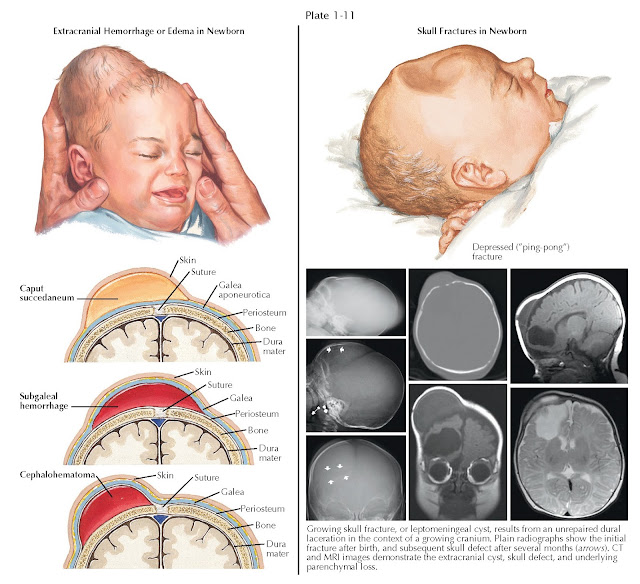 Skull Fractures. Neonatal skull fractures may be classified as linear, depressed, or occipital osteodiastasis. Linear fracture may be associated with cephalohematoma or, in traumatic deliveries, with epidural and subdural hemorrhage. Most heal without complication. Rarely, they become diastatic and are associated with a leptomeningeal cyst due to associated dural and meningeal tears that enlarge with brain growth.

Depressed (“ping-pong”) fractures are of little clinical significance. Most are associated with the use of forceps, but some are related to intrauterine trauma against pelvic prominences in automobile accidents and falls, and also in active labor. Surgical elevation may be required and often can be performed with minimally invasive techniques.

Occipital osteodiastasis is seen in breech deliveries. The associated dural sinuses may be ruptured, causing a subdural hemorrhage of the posterior fossa. Surgical drainage is rarely necessary.