Cryptococcosis is caused by the closely related, budding, yeastlike fungi Cryptococcus neoformans and Cryptococcus gattii. Cryptococcus is a uniphasic fungus that does not exist in a mycelial form. Cryptococcus neoformans has a worldwide distribution in rotting vegetation as well as in soil contaminated by pigeon excreta. However, pigeon exposure does not play an important role in the epidemiology of this infection. It is likely that both humans and pigeons get exposed to this fungus through exposure to rotting vegetation, and the latter act as carriers of the fungus in their gastrointestinal tracts. Most infections in immunocompromised hosts are caused by C. neoformans. C. gattii has been associated with certain varieties of Eucalyptus trees in Australia and other parts of the world and with other tree varieties in Vancouver Island in Canada. Almost all C. gattii infections are seen in immunocompetent hosts.

Cryptococcus spp. probably gain entry into the body through the lungs, by inhalation of the basidiospore form of this fungus. Basidiospores are smaller than the yeast form that facilitates deposition in the alveoli and terminal bronchioles after inhalation. From the lungs, the fungus can disseminate to all organs. Although the lung is the initial site of infection, it is the second most clinically relevant site of infection after the central nervous system (CNS). After inhalation, C. neoformans causes a small focal granulomatous pneumonitis; the vast majority of these are clinically and radiographically silent. However, in a manner similar to tuberculosis, these foci of yeasts can persist in a latent stage and cause active infection later if the host immune system becomes compromised.

The thick polysaccharide capsule of C. neoformans has antiphagocytic properties and is an important virulence determinant. In the laboratory, the capsule can be visualized as a clear area in a suspension of India ink when examined under a microscope. Another important virulence factor is the enzyme phenol oxidase, which is also unique to C. neoformans and can be used for laboratory identiﬁcation.

Some immunocompetent patients can have symptomatic infection, which may be related to infection with a large inoculum or a virulent strain. These patients usually present with cough, sputum, chest pain, fever, weight loss, and hemoptysis. Chest radiographic ﬁndings can vary widely, including solitary or multiple nodules, pneumonic inﬁltrates, hilar and mediastinal adenopathy, and pleural effusion. Diagnosis is made by visualization of the characteristic encapsulated yeast forms in sputum, bronchoalveolar lavage, or tissue specimens and culture of the organism from these same specimens. Serum cryptococcal antigen is rarely positive and suggests disseminated disease and a need for sampling the cerebrospinal ﬂuid.

In HIV-infected patents, the pulmonary infection is more acute and severe, and the majority of these patients have CNS involvement. These patients usually have interstitial inﬁltrates, but alveolar inﬁltrates, mass lesions, adenopathy, and pleural effusions are also seen. Co-infection with other opportunistic pathogens has been described in HIV-infected patients. Diagnosis relies on microscopy and culture of respiratory secretions or tissue. Serum cryptococcal antigen results are positive in the majority of these patients. CNS involvement should always be assessed in these patients. 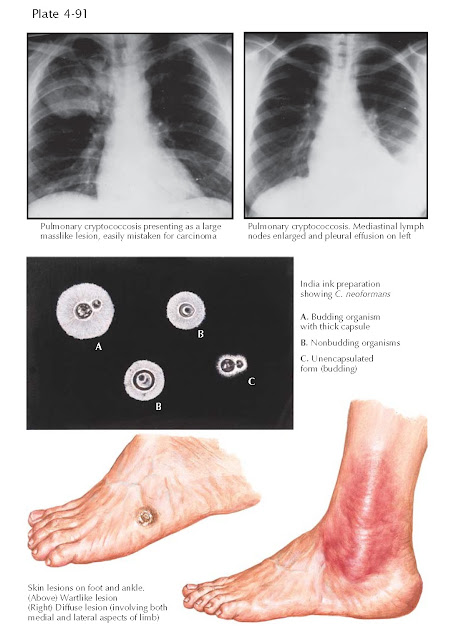 With the exception of immunocompetent asymptomatic patients with a negative serum cryptococcal antigen result, treatment of cryptococcosis is indicated. Asymptomatic patients with positive serum antigen test results should be treated as having mild to moderate disease to prevent symptomatic systemic dissemination. For mild to moderate pulmonary disease in immuno- competent patients, oral ﬂuconazole or itraconazole for 6 to 12 months is indicated. In patients with extensive multiorgan disease or CNS involvement, intravenous amphotericin B and ﬂucytosine is indicated as induction therapy for 2 to 3 weeks followed by oral ﬂuconazole. The same treatment approach is recommended for all immunocompromised patients with cryptococcal infection because the induction therapy is fungicidal. Prognosis is generally good with current treatment of cryptococcosis.