Paracoccidioidomycosis, formerly known as South American blastomycosis, is caused by inhalation of the spores of a thermally dimorphic fungus, Paracoccidioides brasiliensis. The organism lives in soil or on vegetable matter in a mycelial form and can be cultured in this phase on Sabouraud glucose agar at room temperature. After gaining entry into the body, the fungus is transformed into a yeast, which reproduces itself by the formation of multiple buds. However, organisms with single buds are also observed. The yeast form of the fungus can be cultured on blood agar at 37˚C but is not infectious.

The disease is limited geographically to Latin America, from Mexico to Argentina, with 80% of the cases occurring in Brazil. Even in an endemic country, the disease is not distributed homogeneously, likely reﬂecting environmental conditions that favor fungal growth. Because the chronic form of the disease may have a very long incubation period (30 years), cases have been detected in former residents of areas where it is endemic after they have lived for years in Europe or the United States. Under these circumstances, the disease has often been confused initially with tuberculosis or other mycoses.

Soil is the likely natural habitat of P. brasiliensis, which relates to a high incidence of agricultural or construction exposure in patients with this infection. Children account for less than 10% of the cases with no gender predilection, but in adults, a striking male predominance, as high as 15:1, is seen. Smoking appears to be a risk factor for disease in adults.

Clinical presentations of the disease include a chronic “adult” form in the majority, an acute-subacute “juvenile” form in 15% to 20%, and a recently described acute disseminated form in HIV-positive patients. The latter two presentations occur in younger individuals and mainly involve the reticuloendothelial system with little pulmonary manifestations. The chronic form usually occurs in individuals 40 to 60 years of age and is almost always a multifocal disease with predominant pulmonary involvement. Pulmonary symptoms of dyspnea, cough, and sputum are chronic and nonspeciﬁc. Often on physical examination, abnormalities are lacking despite signiﬁcant radiologic ﬁndings. Chest radiographs usually show bilateral, symmetric alveolointerstitial or interstitial inﬁltrates in the lower and central lung zones, sparing the apices, with occasional areas of small cavitations. High-resolution computed tomography scans show a variety of ﬁndings, including ground-glass attenuation, nodules, cavitated nodules, interlobular septal thickening, and architectural distortion. After treatment, residual ﬁbrosis is seen in 50% and bullous disease in 25% of patients.

Lesions of the upper airway mucous membranes (oropharyngeal, laryngeal, and nasal) are common in paracoccidioidomycosis. They are painful, hyperemic, and covered with small hemorrhagic dots (mulberry-like) and tend to be progressive and destructive. Draining (submental and cervical) lymph nodes are often enlarged. Dissemination to the skin, bones, adrenal glands, central nervous system, gastrointestinal tract, and gonads may occur with corresponding clinical manifestations.

Deﬁnitive diagnosis depends on demonstration of the causative organism by direct visualization in infected tissues as 6- to 40-m yeast cells with multiple buds or by isolation in culture. Antibody and antigen detection tests are helpful adjuncts to diagnosis and guides to prognosis and therapeutic response. 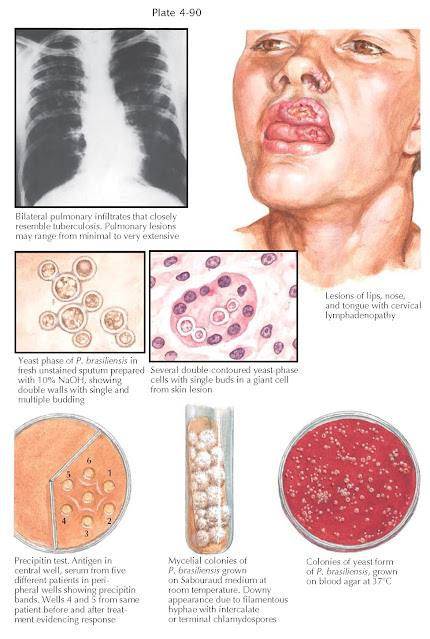 The azoles, speciﬁcally itraconazole, are the treatment of choice for this infection, with a 95% response rate with a 6-month course. Although sulfonamides, especially trimethoprim/sulfamethoxazole, are effective for paracoccidioidomycosis, these agents must be administered for very long periods (3 years), and relapse is frequent. Amphotericin B should be reserved for critically ill patients.