The glandular prostate originates from the epithelium of a narrow tube of cloacal mesoderm (primitive posterior, or prostatic urethra). Glandular tissue does not become evident until fetal week 10, when epithelial evaginations or buds extend posteriorly from the ﬂoor of the primitive urethra into the surrounding mesenchymal tissue. By the 11th week, lumina form within the epithelial cords and cellular buds form primitive acini. Mesenchymal cells differentiate into smooth muscle, ﬁbroblasts, and blood vessels. During the 12th week, the epithelium continues to proliferate while connective tissue septae extend into the acini, and the stroma of the gland thins as the ducts and acini expand. By 13 to 15 weeks, testosterone concentrations have reached peak embryonic levels. Androgen-mediated epithelialmesenchyme interactions cause simple cuboidal epithelial cells to differentiate. By the end of the 15th week, the secretory cells are functional, the basal cell population has developed, and scattered neuroendocrine cells are present. Maturation of the gland continues while embryonic testosterone levels are high; however, as testosterone levels fall during the third trimester, the gland enters a quiescent state that persists until puberty. At puberty, when testosterone levels again increase, the epithelium proliferates, giving rise to the complex folding seen in the mature gland. The prostate doubles in size during this phase of development, and as androgen receptors are expressed by epithelial cells, the full secretory phenotype is established. 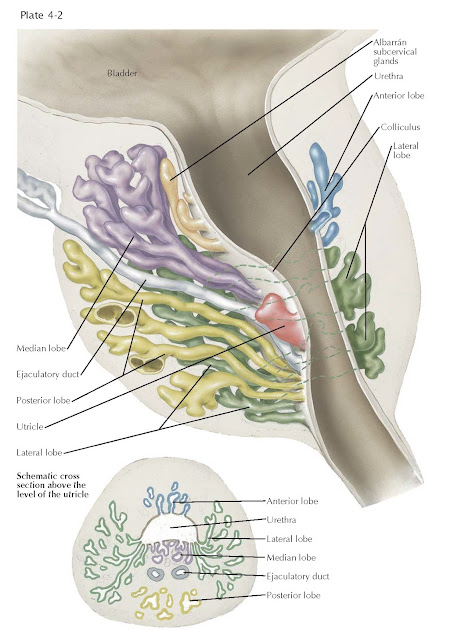 During early prostate development, ﬁve groups of epithelial buds, tubules, or lobes develop and are termed (1) middle, (2) right lateral, (3) left lateral, (4) posterior, and (5) anterior. The term lobes used here should not be confused with the same term used to describe the cystoscopic view of prostatic enlargement later in life (see Plate 4-9). The lateral tubules, 37 to 40 in number, evaginate from the right and left lateral walls of the primitive urethra. Their oriﬁces are located between the primitive bladder neck and the verumontanum (“mountain ridge”). As they grow posteriorly and outward, they eventually form the greater part of the gland, the peripheral zone, in the adult prostate. As they branch laterally, they extend superiorly to meet and form a commissure of glandular tissue in the ventral aspect of the adult prostate anterior to the urethra (the anterior zone).

The middle or median lobe develops from 7 to 12 tubules located in the ﬂoor of the urethra proximal to the ejaculatory ducts. They are separated from the lateral tubules by connective tissue and eventually become the central and transition zones.

The posterior lobe arises from 4 to 11 tubules that appear in the third month of development and arise from the ﬂoor of the urethra distal to the seminal colliculus. They eventually contribute, along with the lateral lobes, to the posterior zone of the prostate. The acini and ducts of the posterior lobe grow posteriorly behind the ejaculatory ducts, where they are separated from other prostatic zones by a layer of ﬁbromuscular tissue in the adult. These tubules are large and are also separated by ﬁbrous tissue from the ejaculatory ducts. Carcinoma of the prostate (see Plate 4-10) develops more commonly in the posterior zone than in other prostatic regions, whereas benign hypertrophy (see Plates 4-7 through 4-9) originates mainly in the transition zone.

The anterior or ventral lobe consists at ﬁrst of rather large and numerously branched tubules, averaging nine in number. At fetal age 16 weeks, these tubules begin to atrophy and in the newborn are reduced to a just few acini.

The eight to nineteen small tubules composing the subcervical glands of Albarrán, develop under the ﬂoor of the prostatic urethra just distal to the bladder neck. These branching tubules are short and consist of ﬁne and cylindrical epithelia. Other small tubules may also develop under the mucosa of the trigone (glands of Home). Neither set of tubules is a common source of hypertrophy or cancer in the adult.