The prostate, seminal vesicles, and bulbourethral glands of Cowper are the accessory glands of male reproduction and contribute to the makeup of seminal ﬂuid. Prostatic secretions are acidic and comprise the ﬁrst and minor portion (10% to 20%) of the ejaculate. The seminal vesicles contribute ﬂuid of basic pH and constitute the majority of seminal ﬂuid (80% to 90%). The adult prostate, a ﬁrm, rubbery organ weighing 20 g, is located inferior to the bladder neck and surrounds the posterior urethra. It is posterior and inferior to the symphysis pubis, superior to the urogenital diaphragm, and anterior to the rectal ampulla. The prostatic base abuts the bladder wall; posteriorly, a fascial sheath called Denonvilliers fascia (see Plate 2-1) separates the prostate from the rectal wall. The space of Retzius between the symphysis pubis and the anterior surface of the prostate and bladder is a potential space ﬁlled with connective tissue, fat, and a rich venous plexus. The cavernous nerves that control penile erection travel between the prostate and rectum at 5 and 7 o’clock posteriorly and can be injured during prostate resection for cancer. The puboprostatic ligaments attach the lateral and anterior surfaces of the prostate to the symphysis pubis. 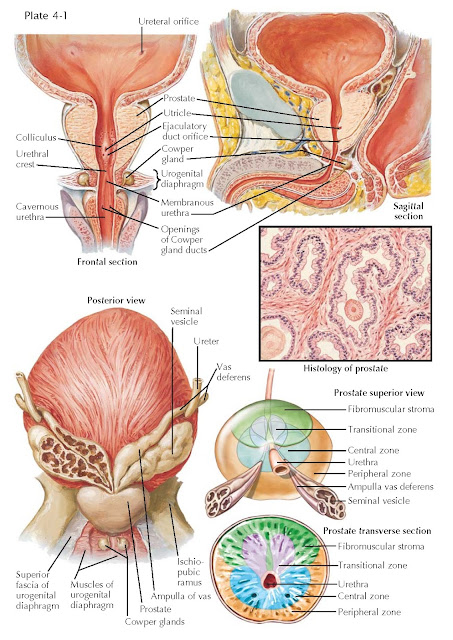 The current concept of prostate anatomy suggests that there are four basic anatomic regions or zones, including the anterior prostate, central gland, transition zone, and peripheral gland. The anterior prostate is entirely ﬁbromuscular and nonglandular, and it appears to have little signiﬁcance in prostatic function or pathology. This zone comprises approximately one- third of the bulk of prostatic tissue. The central gland is composed of the proximal urethra, the prostate tissue around the urethra and ejaculatory ducts, and the smooth muscle of the internal sphincter. It forms the central portion of the prostate and extends from the base of the prostate to the verumontanum. Although this zone accounts for only 5% to 10% of the glandular tissue in young men, it can exhibit signiﬁcant growth with age. The transition zone immediately surrounds the urethra and is where benign prostatic hyperplasia (BPH) develops. The peripheral zone is composed entirely of acinar tissue of alveoli lined with columnar epithelium embedded in the relatively thick ﬁbromuscular stroma and makes up 20% of the glandular volume. It comprises the posterior surface of the prostate, including the apical, lateral, posterolateral, and anterolateral portions of the prostate. The prostatic alveoli drain through a system of branching ducts that empty into the ﬂoor and lateral surfaces of the posterior urethra. Prostatic acini may also contain soft bodies known as corpora amylacea, composed of prostatic secretions and epithelial cells. The peripheral zone rep- resents approximately 75% of glandular volume in the adult prostate. The vast majority of prostatic carcinomas arise in the peripheral zone of the prostate. Normal prostatic secretions discharged with the ejaculate are milky and contain citric acid, choline, cholesterol, various enzymes, prostatic acid phosphatase, and prostate-speciﬁc antigen (PSA), a serine protease that liqueﬁes the seminal ﬂuid 15 to 30 min after it is ejaculated as a coagulum.

The paired seminal vesicles, derived from the wolffian duct, are pouch-like structures 8 to 10 cm long that lie posterior to the bladder and anterior to the rectum. The distal end of the vas deferens (ampullary vas) and seminal vesicles fuse to form the paired ejaculatory ducts that enter the prostate posteriorly and terminate within the utricle in the posterior urethra (see Plate 2-12). The seminal vesicles consist of tubular alveoli, separated by thin connective tissue, surrounded by a thick smooth muscle wall. The seminal vesicles serve as the “bladder” of the reproductive tract, contracting in response to hypogastric nerve stimulation and emptying fructose-rich ﬂuid into the sperm-ﬁlled ejaculatory ducts during ejaculation. Hypogonadism results in a reduction in prostate and seminal vesicle glandular activity and decreased ejaculate volume.