There are many schemes for describing coronary anatomy: the Coro- nary Artery Surgery Study (CASS) classification, the Synergy Between PCI With Taxus and Cardiac Surgery (SYNTAX) classification, and the Bypass Angioplasty Revascularization Investigation (BARI) modification of the CASS map are some of the most widely accepted.

Obtaining a history, physical examination, routine laboratory data (such as chemistry, complete blood count, and coagulation studies), a 12-lead ECG, and a transthoracic echocardiogram can provide valuable information for procedural planning. An accurate history can help determine patient candidacy for PCI and dual antiplatelet therapy in the event that the angiographic findings demonstrate obstructive CAD. Physical examination of the peripheral pulses can help plan the site of vascular access. Stress testing can be performed to risk stratify patients before coronary angiography and to help localize the area of myocardial ischemia. 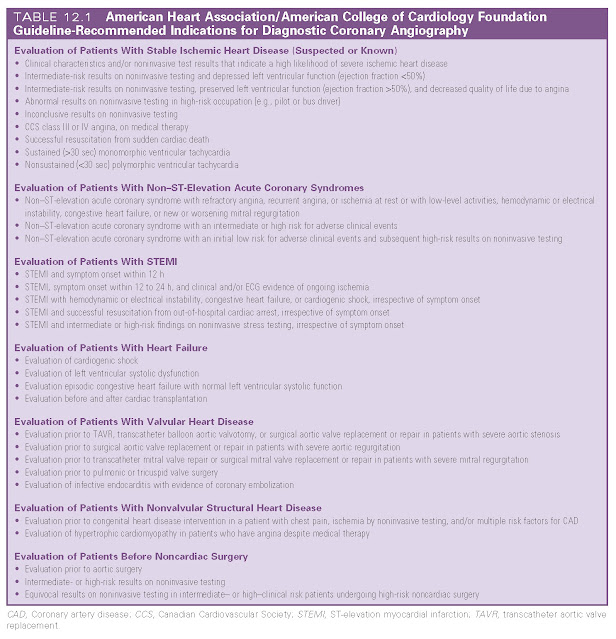 Arterial access can be obtained via percutaneous puncture of the common femoral artery (CFA), brachial artery, or radial artery (Fig. 12.3). Although the femoral approach is historically the most commonly used site for arterial access, the radial approach has become increasingly popular and may be the preferred strategy in patients with morbid obesity, decompensated heart failure, or severe peripheral artery disease.

The femoral approach requires the proper identification of anatomic landmarks before vessel puncture (Fig. 12.4). The fluoroscopic landmark for the optimal CFA entry site is generally considered to be the upper one-half or the upper one-third of the femoral head. In a study of 200 femoral angiograms, the CFA bifurcated below the center of the femoral head in 98% of patients, whereas in another study of 208 femoral angiograms, the bifurcation of the CFA occurred below the upper one- third of the femoral head in 99% of patients. The access site can be confirmed under fluoroscopy and/or vascular ultrasound can be used. Arterial puncture above the inguinal ligament may lead to an increased risk of bleeding complications (e.g., a hematoma or retroperitoneal bleeding). Risk factors for vascular complications are both clinical and anatomic, and include age, female sex, weight, uncontrolled hypertension, previous arteriotomy at the same site, type and level of anticoagulation, arterial sheath size, renal failure, concomitant venous sheath, peripheral vascular disease, prolonged sheath duration, and location of the arteriotomy. Arterial puncture below the femoral head may lead to an increased risk of vascular complications (e.g., an arteriovenous fistula, a pseudoaneurysm, or a hematoma).

The hand receives dual circulation from the radial artery and the ulnar artery through the superficial and deep palmar arches (Fig. 12.5). The Allen test assesses the patency of the arch circulation and involves the simultaneous compression of the radial and ulnar arteries at the level of the wrist for 1 to 2 minutes, which leads to pallor of the hand, followed by the release of ulnar compression. The spontaneous return of color to the hand in 5 to 10 seconds indicates patency of the palmar arch. Although theoretically attractive, the Allen test is less widely used now than previously because it has not been shown to correlate with outcomes. The optimal access site for the radial approach is the point of radial artery pulsation, palpated approximately 2 cm proximal to the radial styloid process. Vasospasm is a possible vascular complication of the radial approach because the radial artery is a small-caliber vessel with a relatively large muscular media. To prevent vasospasm, a vasodilator such as verapamil is routinely administered intra-arterially through the sidearm of the sheath after obtaining radial access.

In patients with a history of CABG, all bypass conduits should be investigated. Saphenous vein grafts are anastomosed to the anterior wall of the ascending aorta above the sinuses of Valsalva. Several strategies can be used to assist with graft cannulation, including a review of previous postsurgical angiograms, identification of markers that were placed during surgery at the ostium of the saphenous vein grafts, and use of different views (left anterior oblique [LAO] to cannulate grafts to the RCA and right anterior oblique [RAO] to cannulate grafts to the left coronary system). The left internal mammary artery (LIMA) is routinely used in surgical revascularization and typically arises anteriorly from the left subclavian artery, several centimeters distal to the vertebral artery (Fig. 12.8). A 0.035-inch guidewire is advanced through a catheter into the distal left subclavian artery either when the catheter is in the aorta or after it has been used to cannulate the left subclavian artery. The catheter is advanced into the subclavian artery and then slowly withdrawn with gentle counter clock wise rotation (so that the catheter tip faces anteriorly) until it cannulates the LIMA.

The essential components of coronary angiographic analysis are listed in Table 12.3. The origin, caliber, course, and branches of all major coronary arteries should be identified. The presence, location, severity, and appearance (e.g., eccentricity or calcification) of any atherosclerotic plaque in the major coronary arteries should be described. The severity of luminal narrowing can be quantified by comparing the minimal diameter of the narrowed coronary segment with that of an adjacent normal-appearing reference segment. Although experienced observers are able to visually estimate the degree of stenosis, the severity of the stenosis can be quantified using calipers or quantitative computer angiography. The flow in coronary arteries can be defined using the Thrombolysis In Myocardial Infarction (TIMI) flow grading scale. TIMI 3 flow describes normal flow with complete filling of the distal vessel. TIMI 2 flow describes delayed or sluggish flow with complete filling of the distal vessel. TIMI 1 flow describes faint flow beyond the stenosis with incomplete filling of the distal vessel. TIMI 0 flow describes a completely occluded artery with no distal flow beyond the lesion. The presence of anomalous arteries, myocardial bridging, fistulas, dissections, aneurysms, and spasm should also be noted. In patients with a history of CABG, graft patency and the presence of competitive flow should be observed. In the setting of total occlusion of a coronary artery, prolonged cineradiography allows the capture of late-filling collateral circulation that may exist (Fig. 12.7). The collaterals can either originate from the occluded artery or a different coronary artery or bypass graft.

Coronary angiography has several limitations in the evaluation of CAD. First, it produces a two-dimensional representation of three-dimensional coronary anatomy. As such, the severity of CAD may be underestimated. Second, coronary angiography delineates the vessel lumen but is unable to provide accurate information about the vessel wall. Angiographic findings of normal vessel lumen cannot exclude underlying disease of the coronary endothelium. Furthermore, proper interpretation of stenosis severity involves identification of an appropriate reference segment with which to compare the diseased segment; this may prove to be difficult because of the possibility of inaccurate vessel wall delineation.

These limitations have led to advances in technology that can supplement coronary angiographic analysis. Fractional flow reserve (FFR) uses a pressure wire (coronary guidewire attached to a pressure transducer) to measure the intracoronary pressure distal to a stenosis, and compares this distal intracoronary pressure with aortic pressure at rest and during maximal coronary hyperemia (see Chapter 26). FFR is calculated based on this comparison, can help determine the hemodynamic significance of a lesion, and is clinically useful in the assessment of an angiographically intermediate lesion. Intravascular ultrasound (IVUS) uses a catheter with an ultrasound core to provide cross-sectional images in which the three layers (intima, media, and adventitia) of the vessel can be identified and characterized (Fig.12.9). Optical coherence tomography (OCT) also uses an intracoronary catheter, but with an optical imaging core that provides high-resolution cross-sectional images. OCT and IVUS can be used to assess the size of the artery, the vascular wall and plaque composition, and burden, and can be used to assess and optimize PCI results.