DUODENAL FOSSAE AND LIGAMENT OF TREITZ

DUODENAL FOSSAE AND LIGAMENT OF TREITZ

The duodenojejunal flexure lies left of the midline at the level of the first and second lumbar vertebrae. The suspensory muscle of the duodenum (ligament of Treitz, suspensory ligament of the duodenum) is a flat, fibromuscular ligament arising from the right crus of the diaphragm near the aortic hiatus. It passes, with individual variations, inferior to the left of the celiac trunk and superior mesenteric artery, posterior to the pancreas, to reach the duodenojejunal flexure. The smooth muscle cells of the ligament are largely continuous with the musculature of the celiac and superior mesenteric arteries; at the intestinal attachment they are connected with the longitudinal muscular layer of the gut, some extending as far as the mesentery of the small intestine. The attachment of the ligament to the duodenum may be quite narrow or it may extend over a considerable portion of the third part of the duodenum. If the suspensory ligament of the duodenum is short, the duodenojejunal flexure is high; if it is long, the flexure may lie so low that the terminal duodenal segment does not take the usual ascending course. 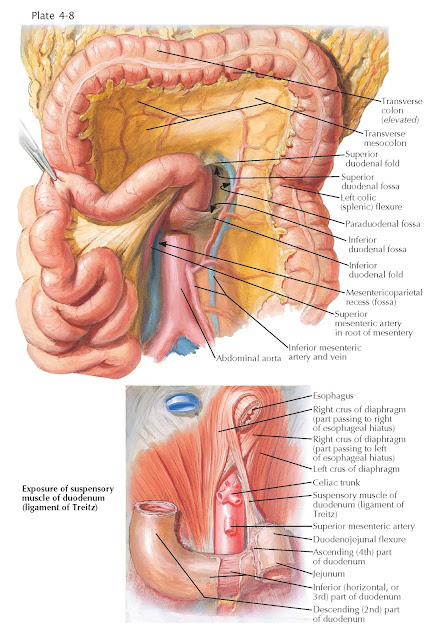 On very rare occasions a duodenojejunal fossa (not illustrated) extends cranially from the duodenojejunal flexure under the root of the transverse mesocolon, or a retroduodenal recess runs superiorly between the aorta and the ascending portion of the duodenum. The mesentericoparietal fossa, invariably present in the fetus, occasionally forms the enclosing sac for a right paraduodenal hernia. It is bounded anteriorly by the superior mesenteric vessels as they enter the mesentery of the small intestine, and posteriorly by the parietal peritoneum over the right side of the aorta.