The duodenum is part of the gastrointestinal tract and as such it is composed of a mucosa, submucosa, muscularis externa, and adventitia/serosa. The duodenum has a serosal covering wherever it is covered by peritoneum and an adventitia elsewhere. It is part of the small intestine, but it is embryonically, morphologically, and functionally distinct from the jejunum and ileum. Aside from the duodenal ampulla, the duodenum displays the macroscopically visible circular folds (of Kerckring), which project into the lumen and increase the available surface area. These circular folds contain cores of mucosa and submucosa. At the microscopic level, the surface area of the mucosa is extensively increased by the presence of villi, small fingerlike projections of the mucosa into the lumen. In between villi are the intestinal glands (crypts of Lieberkühn), which project toward the submucosa. The villi of the duodenum are very dense, large, and, in some areas, leaflike. At the core of each villus is a clear area called a central lacteal that transports lymphatic fluid and fat-soluble substances from the small intestines.

The mucosa can be subdivided into a surface epithelium, lamina propria, and muscularis mucosae. The epithelium of the duodenal mucosa consists of a single layer of high columnar cells, enterocytes, with a marked cuticular border. Between enterocytes are a significant number of mucus-releasing goblet cells. In the depths of the crypts, there are cells filled with eosinophilic Paneth cells as well as some enteroendocrine cells. The lamina propria consists of loose connective tissue located deep to the epithelial lining. Many cells, such as plasma cells and lymphocytes, migrate in and out of the lamina propria in response to immune signals. Deep to the lamina propria is the muscularis mucosae, a double layer of smooth muscle cells, the fibers of which enter the lamina propria and continue to the tips of the villi, enabling the latter to pump fluid from their central lacteals. 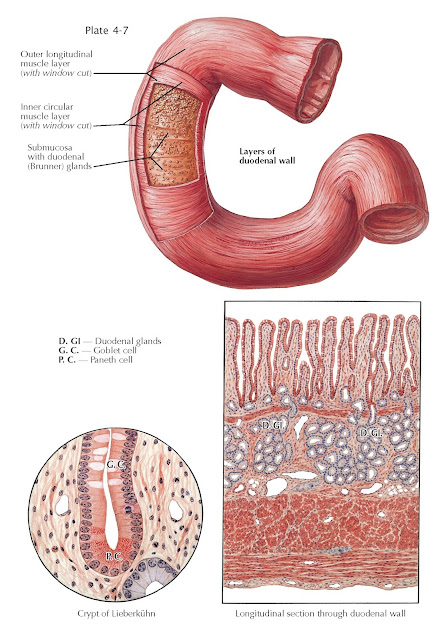 The submucosa, lying between the mucosa and the muscularis externa, makes it possible for these two layers to shift in relation to each other. It is made up of dense irregular connective tissue, the fibers of which are arranged in a mesh. In this network are embedded the duodenal glands (of Brunner), characteristic of the duodenum. These are tortuous acinotubular glands with multiple branches at their ends; breaking through the muscularis mucosae, they open into the intestinal crypts. Cells of the duodenal glands release zymogen granules, mucus, bicarbonate, and alkaline glycoproteins. This fluid helps raise the pH of the gastric con- tents that enter the duodenum after digestion in the acidic environment of the stomach. This explains why the duodenal glands are larger and more numerous in the proximal duodenum and diminish in size and density as the duodenojejunal junction is approached. The number of glands is said to be much smaller in older than in younger individuals.

The two-layered muscularis externa of the duodenum is the same as in the jejunum and ileum. An inner circular layer is covered by a thinner outer longitudinal layer. As elsewhere in the small intestine, the submucosal (Meissner) plexus of nerves is found in the submucosa near its boundary with the muscularis externa. The myenteric (Auerbach) plexus can be located between the circular and longitudinal layers of the muscularis externa. The subserosa and the adventitia are composed of fine collagenous fibrils, which form a delicate lattice. The peritoneum of the duodenum consists, as do all serous membranes of the body, of a layer of flattened mesothelial cells.